Kagha was the archdruid of the Emerald Grove in the Western Heartlands in the late 15th century DR.[1]

Kagha had ginger hair, which was tied up in an elaborate manner. She wore leather armor and fought with an array of spells, a dagger, and a scimitar. She also carried a chicken and a key.[1]

Kagha had a close bond with many animals of the grove, particularly the viper, Teela.[1]

She had ties to Archdruid Aelis and the order known as the Shadow Druids.

When the grove was founded, the druids forced hordes of creature, such as goblins, from the land. However in 1490s DR, they came back after being influenced by the Absolute, and other beings flocked to the grove, particularly tieflings. The goblins of the Absolute seized the First Druid, Master Halsin, and Kagha took over in his place, but had very little tolerance for their kind.[1]

One of the young tieflings that came to the grove, Arabella, stole the Idol of Silvanus. Kagha captured the young tiefling thief and had her viper watch over her. She then instructed the druids of the grove to perform the Rite of Thorns to protect their sacred home from other outsiders. In truth she sought to take over as leader of the grove and rededicate it to serve the Shadow Druids.[1] 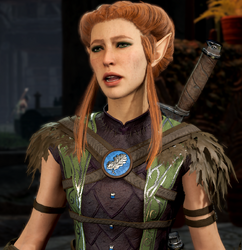