This article is about the celestial quadruped. For the variety of tree, see Kirin.

Kirin (Japanese)
Ki-rins (pronounced: /kiˈrɪnz/ kee-RINZ[11] or: /kaɪˈrɪnz/ ky-RINZ[11]) were noble creatures native to the celestial planes, who either worked for good-aligned deities in direct opposition to the forces of evil or served as protectors of large areas of the mortal world. They were regarded as harbingers of good fortune, and days when a ki-rin was sighted were considered blessed.[1]
“
I was awed to tears at the mere sight of my first ki-rin, and I've met gods.
”
— Volo's notes in Volo's Guide to Monsters.[12]

Ki-rins were similar to unicorns in some respects, as both were noble equine creatures with a single horn. They had stag-like bodies, but were covered in golden scales instead of fur,[2] although some were known to have golden or velvety blue fur.[13][1] They often had thick manes of golden hair regardless.[2] Their shimmering scales and/or fur gave them the appearance of being ablaze in magical light when ki-rins were in flight.[1] They normally had deep violet eyes[2] and melodious voices.[14]

The overall appearance of ki-rins varied depending on the power they served. Some looked like giant unicorns while others were more draconic, and they could also vary in size, with some being as large as elephants. Most had a spiral horn which, like their hooves, was pinkish-copper in color,[2] but some had two horns, or even deer-like antlers.[1]

Ki-rins rarely touched the ground, and were often found soaring through the skies in search of evil to smite and good deeds to be done.[2] Although generous and not prone to greed, ki-rins accumulated treasures, some of which were created by other celestial beings and others of which were trophies and trinkets, mementos from villainous foes they had defeated.[14]

Ki-rins could fly without wings, and they had several other powerful spell-like innate abilities, including the ability to read the minds of those around them. They were extremely resistant to magic.[2] Ki-rins had an ability to create supremely realistic illusions with auditory, visual, and olfactory elements.[15]

Ki-rins, like many other creatures of good from the Upper Planes, were affected by unholy water. It caused them to feel pain and burning sensation as if splashed with acid.[16]

Apart from their powerful innate spellcasting abilities, ki-rins could create food and water for up to twenty four individuals, create permanent soft goods or wooden items, create metallic items that disintegrated within two to five days (including adamantine items that lasted for about one hour), assume gaseous form, cast wind walk, call lightning, and summon weather. A ki-rin could use each of these abilities once a day. Any air-related effects, spells, or items created were of a more powerful or sturdy variety.[5]

The ki-rin's power was so great that it affected areas outside their homes. Their celestial presence purified all running water within three miles of the lairs. When evildoers attempted to corrupt the waters magically or physically, the waters returned to their purified state within three minutes. The aura of ki-rin's home affected good-aligned creatures giving them strength and health, and it scared evil-aligned creatures away. Negative effects of curses, poisons, and diseases were temporarily lifted from good creatures, and if they were to fall from dangerous heights, ki-rin's winds protected them from harm, letting them gently descent to the ground. Upon ki-rin's death, all of these effects dispersed while the boons granted to creatures and plants in the area remained for three following years.[1]

Ki-rins could enter the Astral and Ethereal planes at will.[14]

Ki-rins almost always avoided combat unless faced with most evil creatures[2]. If forced to fight, they would try to render their opponents unconscious.[2] Their main means of physical attack were their powerful hooves and their horn that possessed magical power similar to that of a +3 weapon enchantment.[14]

They were almost impossible to surprise or ambush due to their telepathic abilities.[15]

Ki-rins spoke their own language, however they could easily communicate with all creatures via telepathy.[5]

When occupying other planes, ki-rins lived in sophisticated aeries filled with reaches and elegance. Their homes felt as if they were a combination palace and temple, and though hard to access for outsiders, were open to their allies and followers.[1] On occasion, ki-rins took on the mantle of being the protectors of certain towns or regions.[17][18][1] When on the Prime Material plane they could be found lairing in high mountains or plateaus. Their habitats looked humble from the outside, but their interiors were flush with luxury,[2] even if it paled in comparison to their homes on the planes. [1]

Ki-rins were known to inhabit the highlands of the Moonshae Isles[7] as well as northern forests and mountains of the Endless Waste.[8] The Cloudlands, a fabled aerial kingdom above the Stonelands, was home to several creatures such as ki-rins, mist dragons, and giants.[9]

These celestial creatures could sometimes be encountered on the Astral[19] and Ethereal planes as they occasionally traversed them on their divine missions.[5]

Ki-rins were common allies of solars who had the ability to summon them in the times of need.[20][21]

Ki-rins themselves worshiped their own patron deity Koriel, though they had no priests nor shaman among their ranks. Koriel was considered the creator of ki-rins. The god chose to directly commune with its followers when needed instead of sending visions and signs or communing via clergy. In times of strife, Koriel rather sent his loyal ki-rins to fulfill their god's will than deploying the avatar.[6]

Ki-rins were often-summoned creatures. Ruavia's Steed, an enchanted elvish amulet from Evermeet allowed the wearer to summon several types of steeds, one of them being a ki-rin.[29] The spell planar call allowed a wu jen to summon a specific planar creature that they knew by sight, ki-rins were among the creatures summonable.[30] The spell call aerial beings granted by Aerdrie Faenya to her clerics, allowed them to summon several types of creatures, including ki-rins.[31]

Ki-rins occasionally offered guidance to mortals who pledged themselves to the celestial horned creatures, training under them as monks and serving as ki-rin's agents sniffing evil out across the lands.[1]

Ki-rins were solitary creatures. The females of ki-rins were so rare that most claimed that they simply did not exist.[14][5] However, female ki-rins indeed existed.[32] Female ki-rins never voluntarily laid their hooves on the ground, and no ki-rin youth has ever been seen. These celestials refused to talk about their reproduction, so it remained a mystery to mortals.[14]

Ki-rins were herbivores and fed themselves with the ability to create matter which was only limited by their imaginations and creations' size. They tended to be adventurous and imaginative with the food they created and just as adventurous with things they magicked into being for their homes. The homes of ki-rins were kept in pristine cleanliness, and they used carefully controlled wind to swipe the floors of their abodes.[14]

A separate group of ki-rin who dwelled in the extra-planar realm of Arcadia was known as T'uen-rin. This secluded race wanted nothing to do with other ki-rins or any mortals; however, they were known to visit the Prime Material plane while serving the powers of good.[33]

Ki-rin hair could be used to create youth elixir. One portion of the elixir required 6 ounces of the creature's hair.[34]

An eyelash from a ki-rin, ogre mage, or a similar spell-casting creature, was a material component of the contingency spell[35] and the spell of Elminster's evasion[36]. Hairs from ki-rin's tail could be used to boost potency of the banishment spell.[37]

Ki-rin horns were used in magic and potion-making, but they were highly perishable. The deterioration could be stopped via the preservation spell.[38] One such item was the Horn of Doom, a powerful artifact crafted out of a ki-rin's horn. The artifact could control the storms over the great areas.[39]

Ki-rin's skin could be used to create staves of power. The enchanter covered the unfinished staff with the skin and cast required spells to complete the crafting process.[40] One bundle of ki-rin's skin was valued at 25,000 gp.[41] Owning such a gruesome item was dangerous, however, as other ki-rins and good-aligned sympathetic creatures sought vengeance against those who desecrated bodies of goodly celestial beings.[14]

The legendary book known as the Runes of Norzahk of Kara-Tur was bound in ki-rin hide that gave it a silvery-blue sheen and silky texture.[42] And the Lord of High Water, Crow Dz Pong, had gentle blue ki-rin fur trimming his coat, boots, and cloaks hood circa 1357 DR.[13]

In 1350 DR, several ki-rin sought to stop an ancient red dragon Thorne who was using the Horn of Doom to pommel the realms with devastating storms. The artifact was created using a horn of a ki-rin whose spirit haunted the lair of the red dragon. Even though one of them perished in the dragon's dungeon, others aided the heroes from Phlan who came to face the wyrm.[39]

In 1357 DR, the rulers of the Bloodstone Pass descended into the Abyss to find and destroy the source of Vaasa's power, the Wand of Orcus. On Orcus's layer of the Abyss, the heroes encountered a solar, being burnt on a stake with a hoard of demons dancing around in glee. When rescued, Gabriel summoned a ki-rin to aid the party's journey through hell.[21]

Circa 1359 DR, a group of adventurers traveling through the Sixfold Path in Ra-Khati of the Hordelands. They encountered a ki-rin named Ba'Mit Ahn-so who was being tortured by a sadistic vampire. The celestial creature came to drive the undead out of the ruins of Solon but instead fell victim to the vampire's ambush. When rescued, ki-rin gifted the adventurers an amulet of steadfastness and shared knowledge of the undead-infested city.[43]

Circa 1366 DR, an unknown force was standing guard over Sunbar, protecting it from aerial threats from the Hellgate Keep. It was believed that it was either a ki-rin or a faerie dragon standing guard.[17]

During the same period of time, the shop known as a Handful of Eyes in Hill's Edge offered living monsters for purchase. Their stock varied from critters like snakes, rats, spiders for 25 gp, and rare powerful creatures like ki-rin that went for 350,000 gp or more.[44]

Sometime before 1367 DR, King Azoun Obarskyr IV was saved from an assassin by a ki-rin in the tavern of Waymoot called the Moon and Stars. A crafty Zhentarim assassin polymorphed himself into a beholder in attempt to slay the King of Cormyr, but serendipitously was killed by a ki-rin who, in a guise of a man, was quietly playing cards at the back of the tavern at the time.[45]

In 1373 DR, alu-fiend Aliisza witnessed creatures from many alien universes during her visit to the Plain of Infinite Portals, some of them beings she glimpsed were ki-rins.[46]

Sometime after 1486 DR, an ancient red dragon Karrnsyrrl was released from his magical prison by Nadir, a malevolent rakshasa. After raining destruction on Daggerford, Karrnsyrrl made his way to the Moonshae Isles where it continued its rampage. The ki-rin defender of Moonshaes, Daiwon battles the beast in the skies over the islands. She repelled the wyrm but was gravely injured, retreating to her lair on the isle of Gwynneth. The group of heroes from Daggerford pursued the red dragon and eventually reached the dying ki-rin's lair. With their help, Daiwon reached the shores of Myrloch and departed the land, using the last of her strength to send the heroes to Calimshan in pursuit of Karrnsyrrl.[18][47]

Khelben Arunsun riding upon the back of a ki-rin, from the cover of the City of Splendors boxed set. 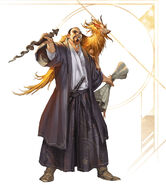 An infant ki-rin on the shoulder of a war mage.

From left to right: a lich, a couatl, and a ki-rin.

A majestic ki-rin.
Add a photo to this gallery