Edit
This article or section is about elements from the These materials are considered canon unless they contradict content in some other Forgotten Realms publication.

Ranger
Kivan was an elven ranger from the Shilmista forest in the Lands of Intrigue. During the mid–14th century DR he set out on a mission of revenge against the individual that ruined his life.[1]
“
"My need for revenge gives me strength to go on."
”
— Kivan.[1]

Kivan was a stoic man of few words. He was rather undiplomatic, cold in nature and extremely gruff with others. As such he did not readily become friendly with others.[1]

He did not like being in cities or traveling underground like the "dwarven folk." As to be expected Kivan was not fond of drow or those that followed Lolth.[1]

Despite his solitary nature Kivan was wholeheartedly in love with his wife Deheriana.[1]

A few years before the Year of the Banner, 1368 DR, Kivan and Deheriana took a romantic vacation away from their daily lives. The couple were waylaid and captured by a group of bandits led by the half-ogre Tazok. The bandit leader tortured both of them for his own enjoyment. While Kivan was able to escape with his life, Deheriana was not so fortunate.[1]

Kivan set out on mission of vengeance. In the months prior to the iron crisis, Kivan began hunting bandits as a means to get closer to Tazok and the Blacktalons.[1]

Some time that year or next, he Kivan began working with several other adventurers tasked with escorting a future bride to the home of her groom in Amn. Among the others involved were the noble paladin Ajantis, the warrior Shar-Teel Dosan, the Cyricist priest Tiax, and Eldoth Kron. Unfortunately the group was almost immediately assaulted by a band of hobgoblins. Kivan's fate after the battle was unknown.[2] 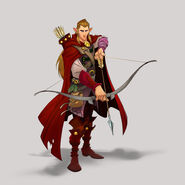 Kivan as he appears in the cancelled game, D&D Dice Adventures.