Kleef Kenric was a human paladin and a chosen of Helm.[1] He played an influential role during the Second Sundering that ensured the failure of Shar's schemes.[2]

Kleef had black hair,[1] and a large build.[citation needed]

Kleef was determined and was a follower of the god Helm.[1]

He wielded a greatsword named Watcher. This sword was too heavy to be wielded by anyone other than a Kenric, but to a him it was "as light as a dagger".[1] 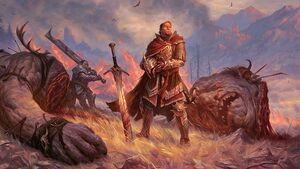 Retrieved from "https://forgottenrealms.fandom.com/wiki/Kleef_Kenric?oldid=583131"
Community content is available under CC-BY-SA unless otherwise noted.