Avernus
Kurtulmak (pronounced: /ˈkɜːrtʊlmɑːk/ KUR-tul-mak[13]) was the patron deity of the kobolds, and they claimed he gave them life. After Kurtulmak created the kobolds and taught them the skills of thieving and pillaging, the gnomes entered into an eternal conflict with his creations, angering him.[2]
“
By the point of Kurtulmak’s spear and the tip of his poisonous tail, I will see every member of your family perish.
”
— A kobold prayer.[1]

Kurtulmak was the sworn enemy of Garl Glittergold and the other gnome gods.[3] He was also a sworn enemy of the urd god Kuraulyek, and he was elevated to divinity by the dragon god Asgorath.[14]

The Treatise Historical of the Dragon Tyrants recounts that in around −24,500 DR, Kurtulmak was created by the green dragon Caesinsjach as the first of the kobolds and their first leader. When the kobolds began enslaving the newly created gnomes and stealing the gemstones that contained their unborn souls, Garl Glittergold intervened by collapsing the mountain that contained the first kobold nation, Darastrixhurthi (and this collapsed mountain eventually became known as the Shadow Sea in Netheril). Most of the kobolds died, and most of those who survived the collapse were killed by Caesinsjach herself, who had been driven mad by the first Rage of Dragons. The dragonwrought kobold Kuraulyek had been ordered to watch for the returning Caesinsjach so that he could warn his people, but instead he escaped with his urds, settling in what would become known as the Thunder Peaks. The few surviving kobolds settled along the Moonsea.[14]

Kurtulmak himself had died in the collapse of Darastrixhurthi, but the dragon god Asgorath raised him to divinity. Asgorath also gave divinity to Kurtulmak's hated enemy, the traitor Kuraulyek, who fled Kurtulmak's wrath by fleeing to the Barrens of Doom and Despair.[14]

This tale may be somewhat apocryphal, however, since other sources place the First Rage of Dragons five hundred years prior to the creation of the urds.[15]

According to other myths, he stole the gift of sorcery from a dragon deity to give to his people.[3]

Kurtulmak means "To escape" in Turkish.[16]

The Symbol of Kurtulmak, a gnome skull 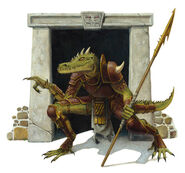