Laeral Silverhand (pronounced: /ˈlɛərɔːl/ LAIR-awl[13]) was one of the Seven Sisters, a Chosen of Mystra, and the Open Lord of Waterdeep, formerly known as the "Lady Mage of Waterdeep". Together with her partner Khelben "Blackstaff" Arunsun, they led the Moonstars, a dissident faction of the Harpers, which sought to guide the cities and countries of the North toward a shared destiny.[12]

Laeral was incredibly organized—it was the only way she could manage to fit all of her activities into a single day. She was friendly and accommodating, leading almost everyone who met her, even the haughty nobles of Waterdeep, to consider her a true friend. She was also proactive in her defense of the city, to the extent that certain Waterdhavians would stage calamitous events so that she would keep tabs on persons of interest for them without their needing to ask for her help or involve themselves directly.[14]

Having been in thrall to the Crown of Horns and forced to commit heinous acts by it, she felt that she understood the nature of evil better than most and often mediated disputes with rogues, undesirables, and sentient monsters, especially in Skullport where she kept an alias identity in the form of Irusyl Eraneth.[citation needed]

Laeral was infuriated by magic-users who employed their power to deceive and exert baleful influence over others. She disliked doppelgangers and slave-owners.[citation needed]

One of the most prolific magic item creators in recorded history, Laeral was particularly adept at determining the abilities of magic items and could potentially do so merely by holding one in her hand without activating it. She also hid a gift granted to her by Mystra to deactivate or cause malfunctions in magical items that touched her.[15]

As a centuries-old wizard, Laeral was one of the most accomplished spellcasters in Faerûn, though her powers steadily declined as she had to increasingly devote her energies to maintaining her aging body.[4] Like all Chosen, Laeral's divine blessings were much reduced in the wake of the Second Sundering, as all gods took a more distant approach to interfering in mortal affairs.[4] Nonetheless, her knowledge and facility with Weave-craft, as well as her silver fire, made her a formidable opponent.[6]

When Laeral became a Chosen, Mystra gifted Laeral with special power over magic items. As such, Laeral created many magic items in her lifetime. Notable and oft-copied examples include a magic steel shield that granted the wielder resistance to spell, and shields of this type were subsequently named Laeral's spell shields. In addition to the normal abilities of a Chosen of Mystra, Laeral had given herself the permanent benefit of wearing a ring of fire resistance.[15] Although there is a type of magic armor called Laeral's storm armor, it is not clear what role Laeral had in its development.[16] Laeral ceased her prolific creation of magical items after she was freed from the Crown of Horns.[citation needed]

Laeral collected beautiful dresses and shoes. She liked to wear them to social occasions but didn't care if they were soiled or ruined while she wore them. Laeral also particularly valued hand-sized ornaments depicting frogs, snails, and toads. The pride of her collection was a set of jewels carved into the shape of snails and frogs that magically orbited her bedside table.[17]

During her reign as the Open Lord of Waterdeep, she wore a robe of the archmagi.[6]

Laeral spent most of her day instructing and looking after her partner's wizard apprentices, most of whom were too intimidated or overawed by their master to actually learn from him. She also maintained Blackstaff Tower, ensuring its wards and stores were maintained. She also spent much of the day meeting with friends, allies and even strangers who wanted to speak with her.[citation needed]

The rest of her time was spent coordinating the efforts of the Harpers (until the Harper Schism), carrying out duties for the Lords' Alliance, and acting as a spy for the Lords of Waterdeep both in the city and in Skullport as Irusyl. She also kept constant watch on any of Khelben's apprentices who left Blackstaff Tower to ensure that no treachery was afoot.[citation needed]

Her free time was spent either studying spells, exploring other planes, attending parties, shopping for clothes (which she refused to haggle over), or alone with her consort Khelben.[citation needed]

Though she did not need to sleep, she insisted on being left alone for her "highsun nap", during which time she did as she pleased without the constraints of her hectic schedule. Also, if, for some reason, she was unable to perform some of her more mundane daily tasks, she could call upon a long list of trusted Waterdhavian ladies (some of whom were powerful nobles) to do them for her.[17]

Apart from attending to her duties, Laeral held as her objectives the addition of Cormyr, Amn, Westgate, and Luskan to the Lords' Alliance. She also made efforts to remove Zhentarim influence from the Sword Coast and the North. Her ultimate goal however, was to unite all thinking races, be they dwarves, elves, humans, or orcs in a goodly purpose.[citation needed]

Laeral was one of seven female spellcasters born to the ranger Dornal Silverhand and his wife Elué (with the exception of Qilué Veladorn who, due to divine intervention, was drow). Collectively, they were known as the Seven Sisters.[citation needed]

She had three children, a girl named Maura, conceived by Laeral during her time under the influence of the Crown of Horns by an unknown father. Maura was in love with the Crown Prince of Evermeet, Lamruil.[citation needed] Laeral also had twins, a boy named Krehlan Arunsun and a girl, fathered by her consort and fellow Chosen Khelben shortly before his death.[citation needed]

After their mother died, Laeral, Dove, and Storm were placed into the care of Elminster until they came of age. When her sisters left the Old Sage, Laeral elected to stay with him as his apprentice. When she had finished her studies, she left to join the Harpers.[18]

Laeral left the Harpers early and, in the Year of the Warrior's Rest, 806 DR, at age 41, she was a self-styled queen, ruling the realm of Stornanter from Port Llast. Many later sages believed that Laeral had named herself after this queen, not realizing that it was actually her. It was at this time that Laeral also attempted to rebuild and resettle the ruins of Illusk. Before she did so, she explored the Host Tower of the Arcane, where she encountered several liches who were members of the Grand Cabal, rulers over Illusk from centuries before. She sealed the liches inside the tower with magic before continuing with her other works.[2]

Barely ten years into her reign, Laeral's court mage, Malek Aldhanek, with whom she had worked very closely, was apparently assassinated in a plot involving other nobles. Realizing too late that she was in love with Malek, Laeral quit her court and spent twenty five years wandering Stornanter. In truth, Malek was not dead—he'd never even existed—and was actually Khelben Arunsun in disguise. Khelben faked his death to deal with a dire prophecy he had discovered in the works of Alaundo.[19]

During this period of wandering, Laeral came into conflict with Slarkrethel in the Year of the Leaping Lion, 834 DR and although the great kraken was driven off, he managed to steal Laeral's magical throne, which she had crafted with Malek.[20]

Her activities attracted the attention of her sister Syluné, who desired to rule over the same region, and the two were drawn (some say manipulated) into spell-battle in the Year of the Hunted Elk, 841 DR. Having grown up separately, neither recognized the other so, before they destroyed each other, Mystra felt obliged to manifest herself before the two sisters and explain their heritage, offering them both the mantle of Chosen. They accepted and journeyed together for a time, under the guidance of Azuth.[21]

Under an assumed name, Laeral eventually established herself as a hard-drinking and fearless adventurer, coming to lead an adventuring band known as the Nine. In the Year of the Wandering Maiden, 1337 DR, Laeral and the Nine discovered the ancient Netherese artifact known as the Crown of Horns in Yûlash. The Crown was actually planted for her to find by the Netherese lich Aumvor The Undying, who wished to use the Crown to influence her to marry him. The plot failed when Laeral donned the headpiece and the Crown's powers conflicted with Laeral's spellfire and drove her into madness.[22]

Twenty years later, in the Year of the Prince, 1357 DR, Khelben Arunsun traveled to the Stronghold of the Nine in the High Forest, freed Laerel Silverhand from the Crown of Horns, the malign intelligence contained within' and her madness. Laeral returned with him to Waterdeep for more healing, and after that, they were inseparable. She was referred to as Lady Arunsun,[23] though they were never married. The mysterious circumstances surrounding Laeral and Khelben's meeting and subsequent partnership led some to believe that Laeral was enslaved to Khelben against her will. Laeral never denied this, instead preferring to let those who wished Khelben harm seek her out as an ally against him.[17]

In the the Year of Lightning Storms, 1374 DR, Laeral was pregnant with her son Krehlan Arunsun, the future Blackstaff, whom she conceived with Khelben shortly before his death.[24][25]

Laeral wrote Lifelong with Regrets in the Year of the Wrathful Eye, 1391 DR.[26]

Thereafter, she and her sister Alustriel hid among the monks of Candlekeep to prepare the destruction of the wards so that no one could use them to get control over the Weave.[27] In the Year of the Rune Lords Triumphant, 1487 DR, Larloch foiled their plans and absorbed the wards.[28] Shortly thereafter, Laeral, Alustriel, Elminster, and the Srinshee prevented Larloch's ascension to godhood.[29] Laeral remained a Chosen of the restored Mystra.[30]

After the fall of Myth Drannor, Mystra herself appeared to Laeral. With the end of Luruar, stability was once again needed in the northern Sword Coast, and Mystra tasked Laeral with maintaining it by becoming Open Lord of Waterdeep. According to Mystra, her presence would actually restrain abuse of magic for personal gain, and therefore limit the possibility that the general population could turn against wizards, blaming them for eventual disasters, and blindly hunting all Art-wielders. Following Mystra's request, Laeral returned to Waterdeep, and swiftly managed to gain the support of the Masked Lords of the city, supplanting Dagult Neverember as Open Lord.[31][32]

At some point during her Lordship, circa 1490s DR, Laeral Silverhand acquired a baby griffin and hired a Traynov, a trainer to raise the monster and train as a companion and loyal creature. Both baby griffin and its trainer were staying inside Laeral's mansion in Waterdeep.[33] Unfortunately for the Open Lord, Traynov was bribed by the current Xanathar during that time, Zushaxx, and the monster trainer aided in the griffon's kidnapping.[34] Laeral Silverhand and her trusted City Watch civilar Jauslo found a halfling thief not associated with the Xanathar's Thieves' Guild and recruited him in the dangerous rescue mission to Skullport.[33]

Novels
The Best of the Realms II: "Dark Talons Forbear Thee" • Realms of Magic: "Smoke Powder and Mirrors" • Spellfire • Shadows of Doom • All Shadows Fled • Cloak of Shadows • Elfshadow • Elfsong • Silver Shadows • Thornhold • Silverfall • Evermeet: Island of Elves • The Temptation of Elminster • Elminster in Hell • The Summoning • The Siege • The Sorcerer • Blackstaff • Storm of the Dead • Ascendancy of the Last • The Herald • Death Masks

Gamebooks
To Catch a Thief 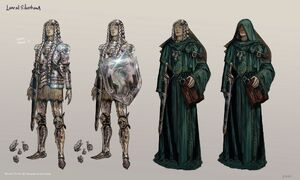 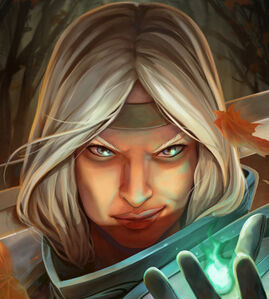 Laeral Silverhand as she appeared in Warriors of Waterdeep. 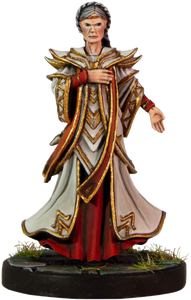