The Lake of Mists was the second largest freshwater lake in the Endless Waste. The lake was fed by the heated waters from the Firepeaks and underground thermal springs.[1]

The water of the Lake of Mists was warmer than normal. The difference in temperature caused thick fogs and damp mists throughout most of the fall, winter, and spring. The Lake of Mists had always been a place of mystery. Once part of the mighty Raumathar Empire, the lake was surrounded by settlements and ruins from that age. Most notable of these was Almorel. However, many of the other small settlements had burial mounds and ruined keeps that were shunned by the locals. Stranger still were the creatures rumored to be living in the lake, somewhere near the bottom of its immense depths.[1]

The settlements around the lake relied on the fishing and lumber industries for their trade. The lake was rich with sturgeon, salmon, and other fine game fish. The fishermen, in small boats of two to three men, went out every day to bring in their catch. Some of the fish were sold fresh, but most were dried, smoked, salted, or pickled and shipped toward Rashemen and Murghom. Smoked sturgeon and caviar from the lake were especially prized by the nobles of both courts.[1]

The small forests around the shores of the lake were filled with old oak, walnut, and pine trees. These were cut and then floated to the towns. Most of the lumber was taken to the small mills or carpenters and used locally. Some, particularly the walnut, was towed across the lake and floated down the Clearflow River to Murghom or loaded on wagons at Almorel. However, because lumber was difficult to ship, only a little was sent this way.[1]

The settlements around the lake were mostly composed of Raumvira, a stocky, thick-bearded race. These people trace their ancestry back to the fall of the Raumathar Empire, although the nomads who surrounded the lake had their effect too. The Raumvira did not form into a single country, but the towns generally supported each other in a loose confederation. Government and titles were much the same from one to the other. These all followed the pattern set by Almorel, the largest of the Raumvira settlements.[1]

Generally, the head of a settlement was the mechnik or sheriff. He was not the sole ruler, but headed the veche, the city council. Serving on the veche were the starosta, elders of the town. The veche heard cases and made rulings in most matters. However, issues that affected a particular business were presented to the appropriate guild or ulista. Matters relating to the fisheries were referred to the fishermen’s guild, the isad. The farmers were organized into the verv, and the lumbermen formed the khod. Each guild had some power to approve or disapprove all judgments that affected it.[1] 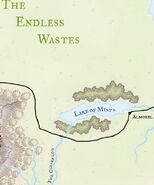 4e map
Add a photo to this gallery

Retrieved from "https://forgottenrealms.fandom.com/wiki/Lake_of_Mists?oldid=394252"
Community content is available under CC-BY-SA unless otherwise noted.