Draconomicon: The Book of Dragons
Landwyrms were a type of lesser, wingless dragon, each species of which was near-perfectly adapted to its environment.[1]

Landwyrms were strong-willed and had independent natures.[1]

Although all landwyrm species had different ways of fighting, they all tended to favor stealth and surprise. Additionally, they saw nothing wrong with fleeing a battle only to return later. They were skilled trackers.[1]

All landwyrms were specific to different environments, to which they were extremely well-adapted. They possessed great knowledge about their environments and were known to share this knowledge if approached peacefully.[1]

Landwyrms were among the creatures effected by the Dracorage, and would form flights along with wyverns, chromatic dragons, and elemental drakes, that destroyed everything they came across.[2] 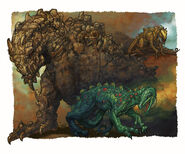 Novels
The Rage • The Rite • The Ruin