Forgotten Realms Wiki
Register
Don't have an account?
Sign In
Advertisement
in: Locations, Articles in need of citations, Islands,
and 8 more
English

Ayrorch, a council of twelve[1]

Lantan was an island-nation in the Trackless Sea north of the Chultan peninsula, known for its advanced technology and the population's devout worship of Gond.[3]

It consisted of three separate islands: Lantan proper, which the Sambar Run separated from the southern Suj, and the easternmost and almost uninhabited Orlil.[citation needed] They were roughly 300 miles (480 kilometers) south of the Moonshae Isles.[6]

The islands of Lantan were rocky and covered in lush jungle with stone pinnacles rising up from the trees.[1][7][8] While lush, the plant cover was less dense than nearby Chult.[9]

The settlements of Lantan were built elevated above the ground and jungle cover,[1][7][8] with turreted homes[1][7] connected by "spiderwebs" of rail-less bridges.[1][7]

The islands of Lantan were said to be protected by "secret weapons". Whether true or only rumor to scare off unwanted intruders, the ships of the Lantanna navy indeed had firethrowers and explosive nets for weapons.[1]

Smokepowder was especially common in Lantan,[10] and guards were sometimes armed with arquebuses,[11] weapons that made use of the stuff. Smokepowder was produced by the inventors of the island.[12] The protectors of the islands also had access to stable, flying rafts armed with "firesticks" (light cannons) and defended with walls of force to shield the crew.[13] The military also was rumored to possess an "armored worm" that could bore through solid rock.[13]

Rich merchants of Lantan protected their goods with watchspiders.[14][15]

The inhabitants of Lantan were primarily rock gnomes[16] and humans called the Lantanna.[1] The humans of the land were pale-skinned with red hair and green or black eyes. They favored yellow-colored, loose clothing and wore wide sun hats.[1][7][8]

The people of Lantan used primarily platinum and electrum coins and trade bars for currency. The trade bars typically were valued at 25 gold pieces by other nations.[1]

The island nation exported many items of wonder to mainland Faerûn, including suspension systems for wagons, self-filling oil lamps, intruder alarms, clockwork time-release devices, snap-together weapons, intricate sewing and surgery tools, and many other wondrous things.[3] Goods that Lantan imported from mainland Faerûn were largely raw materials that the island nation was lacking in, such as copper, gemstones, tin, and wood.[5]

The Lantanese were said to have stolen the technology of the printing press from Halruaa.[1] This, and the supposed existence of dangerous and powerful weapons on Lantan led to tense diplomatic relations between the two nations.[1][13]

After the Time of Troubles, Gondarism was the state religion of Lantan.[18] Clerics of Gond were called "krii", a Lantanna word that actually meant "disadvantaged".[18]

Though Gond was the primary faith, one could still find shrines to other deities for the sake of foreign visitors.[19]

The island nation was ruled by a council of twelve, called the Ayrorch. The Ayrorch itself was led by the Ayrar. The Lantar was the Ayrorch's representative to other lands. The remaining ten members were known as Santar, an ancient Lantanna word for "others".[1]

As early as around the 8th century DR, the Lantanna were trading far and wide. They sold their lesser inventions for rare or difficult-to-procure goods. Ships such as Captain Imbryn Ultal's Aelusteen crossed between Sambar and the port of Haunvaerune on the continent of Arandron. These trading connections were unknown to Faerûn.[20]

After Captain Cordell from Amn discovered Maztica, the Lantanna, being the westernmost extension of Faerûn along with the reclusive Evermeet and the enigmatic Nimbral, also claimed some lands.[citation needed]

When the Spellplague erupted in 1385 DR, the sudden shifting of continental bodies sent tsunamis all along the island and coastal regions of Faerûn, devastating them all. Lantan was hit harder than most.[25] Before the waves reached the island, all the smokepowder and magical reagents in Lantan exploded at the same time, causing great chaos. And as the waves reached the coastline, most of Lantan was engulfed by the Spellplague and sent to Abeir.[6] What remained of Lantan on Toril was entirely flooded, killing the remaining Lantanese and cleaning away their advanced technology.[25]

The size of the island of Lantan was greatly reduced after the transfer of most of its lands to Abeir; the eastern island of Orlil was completely submerged, and the southern island of Suj became two much smaller islands.[26] The waters around the island were said to be haunted by some sort of monster, destroying any ship that approached, usually pirate ships from Nelanther.[25]

In 1487 DR, Lantan was returned to Toril as part of the Second Sundering, and Lantanese ships began to travel again to the Sword Coast.[27] People who traded with them said that the Lantanese were more secretive than before, and that their technology was more advanced as well.[6]

The island of Orlil was home of the College of Bards of Orlil and the Order of Fabulists. The college granted licenses to lecture to its graduates who were learned in the art of storytelling, culture, and lore. The fabulists were repositories of book knowledge, however obscure it was, and grammar was strictly enforced among these bards. The fabulists were known to include members of a little known sentient wombat race from a small island community just off the coast of Orlil. Byrt, a companion of Artus Cimber in the mid-14th century DR, was a fabulist of note.[28]

The High Holy Crafthouse of Inspiration, the heart of the entire Church of Gond, was located in Illul. It was a large, walled monastery, run by the High Artificer.[18]

It was said that only a single dragon lived in all of Lantan, a blue dragon.[29] 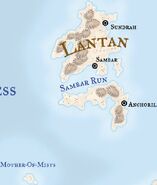