Larissa Neathal was a courtesan and one of the Masked Lord of Waterdeep during the 14th century DR.[2]

Larissa had red hair.[3] However, she was very skilled in using cosmetics and magic to alter her appearance.[2]

By some unknown means, Larissa was protected from all manner of poisons and drugs that made people fall asleep.[1]

In the public sphere, Larissa was superficial and empty-headed. However, she used that persona as a front to allow her to gain information from the many public officials she lured into her hands.[1][2]

In the Year of the Wave, 1364 DR, Larissa was beaten and badly wounded by agents of the Knights of the Shield working for Iriador Wintermist. She was found by Mirt in her home and slowly nursed back to health.[4]

Larissa lived in a house on Mulgomir's Way in the Castle Ward,[2] where she had a maidservant named Marta until she was killed in 1364 DR.[3]

Larissa always wore a distinctive periapt of proof against poison necklace that was shaped like a golden phoenix rising from a cluster of rubies.[2]

Larissa was one of the "Like-Minded Lords" who served as of1364 DR; along with Mirt, Khelben, Durnan, Kitten, and Brian. The group frequently met up with one another to enjoy each others' company.[5] Durnan was her closest friend and she often turned to him for emotional support.[1][2] 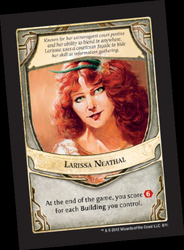 Larissa's "lord card" from the Lords of Waterdeep board game.
Add a photo to this gallery

Retrieved from "https://forgottenrealms.fandom.com/wiki/Larissa_Neathal?oldid=575407"
Community content is available under CC-BY-SA unless otherwise noted.