Legion of the Chimera

View source
This article or section is about elements from the Video games are considered canon unless they contradict content in some other Forgotten Realms publication.

Legion of the Chimera

Severed Hand, Spine of the World[1]

The Legion of the Chimera was an evil organization which operated in the Severed Hand, an elven citadel within the Spine of the World.[1]

The Legion of the Chimera were a sect that believed in equality and justice for half-breeds. Their ranks were filled with hybrids, and those that supported their cause i.e. cambions, half-dragons, half-goblins, lizardfolk, neo-orogs and yuan-ti.[1]

The promising group started off as a collection of different races who wished to stop violence against half-breeds, starting in the region of Icewind Dale. After insults from those of the Ten Towns, and the belief that the local denizens would not accept their kind, the sect became evil. Those of the legion became maddened, and resorted to desperate measures to achieve their goal. Their practices involved slavery, torture, forceful inter-species breeding and the worship of Iyachtu Xvim, the Lord of Darkness.[1]

The to-be leaders of the legion, Isair and Madae, were born in the town of Kuldahar in Icewind Dale, about a year after the troubles with the baatezu general Belhifet. Belhifet had launched a campaign to take over the Ten Towns, and one of his evil acts had involved seeding many human and elven females with his own spawn. One of these, an elven woman named Ilmadia Bariel, who was one of Belhifet's lieutenants, was rescued and resurrected by the Ilmater priestess, Mother Egenia, and brought to live with her in Kuldahar.[1]

After a time, it was discovered that Ilmadia was pregnant. With Egenia and the archdruid Iselore's help, Ilmadia gave birth to twins. The children, however, had hideous disfigurements; scaly red wings, thick twisted legs and tails. They were half-fiends, cambions. Unable to take any more, the elven mother fled from the house and threw herself off a cliff, where her body was never recovered. The archdruid didn't have the heart to destroy the children, despite their demonic heritage, and named them after his own parents. The boy was Isair, the girl Madae. Despite his own trepidation, he allowed Egenia to raise them in the town they were born, Kuldahar. She raised them for a time, shielding them from the hate of the other citizens of Kuldahar and raising them in the faith of Ilmater. When Egenia died, however, the townsmen came upon the twins, as Madae performed burial rights, in accordance with her training as a priestess of Ilmater. With the twins delicate upbringing shattered, their devilish instincts took over, and they fled from the village.[1]

The twins escaped to Luskan where they lived on the streets for a time. Here, they scraped together enough money through intimidation and confidence games. One day, they tried to fool Edgeel, a master of Luskan's Host Tower of the Arcane. Edgeel took them in for their infernal heritage, and used the twins for servants, and even killers, in exchange for protection. The arcane brotherhood made the duo emissaries to the Abyssal Plane. Here, they decided to see how they would fare in the Blood War.[1]

After they had grown to maturity, they met their father, Belhifet, and joined in the legions of hellspawn in the war. Isair and Madae tried to become powers among the hierarchy of the Nine Hells. They were horrified to find that they were no more accepted in this society than in the world of men, and went back to their plane of birth in disgust. After this experience, they wanted to build a society that would accept all half-breeds.[1]

Upon returning to their home plane, the Legion of the Chimera was founded by Isair and Madae, in order to create a safe haven for half-breeds. They wished to work out a treaty with the Ten Towns to stop any violence between their newly founded legion and the denizens of the nearby areas.[1]

On an emissary mission, representatives from Targos, Bryn Shander, and the other Ten Towns traveled to the Severed Hand, an ancient elven fortress on the edges of the Fields of Slaughter, the headquarters of the Legion. The mayor of Bryn Shander sent his representative with finely crafted cakes and pastries, secretly baked with holy water by a priest. The representative offered the "treats" to Isair and Madae, who unknowingly ate the cakes. Of course, the water badly burned the naturally evil creatures' throats, and the twins declared war upon the towns. The representative was imprisoned, despite having no idea that the cakes were baked in such a way.[1]

Isair and Madae were furious. They sent their hordes of goblins to attack Targos, a major walled town in the region. Targos desperately sent word to Luskan, promising fortunes and fame for any aid they could send. Many mercenaries responded, but many several were lost.[1]

Despite their great power and influence, Isair and Madae made a great mistake in choosing the Severed Hand as their headquarters. Formerly the Hand of the Seldarine, the Severed Hand was an elven stronghold that had fallen in the war between the elves and the orcs of the region. Larrel, the elven archmage, had attempted to protect their home by laying a powerful elven protection shield, known as a mythal, upon the area. Although it ultimately failed, the mythal remained upon the stronghold even until the half-fiends came to reside there. Isair and Madae cast many spells upon the Severed Hand in order to bolster their own fiendish powers as well as the defenses of the structure. Madae, a priestess of Iyachtu Xvim, invoked her deity during one of these great spells. The hateful power of Xvim corrupted the mythal, which reacted to this awful power by trying to bind itself to another plane in order to stabilize itself. The plane it chose was the Limbo, the Chaos Plane. Orrick the Grey, a resident wizard of one of the Severed Hand's towers, informed the half-fiends of this disaster, but they accused him of lying, and ignored his warnings.[1]

In the year 1312 DR, a band of mercenaries from Luskan traveled to the besieged town of Targos. The band, with the help of the Targos guards, fought back the first initial attack. Eventually, after a trail of events including desecrating a goblin base and killing the half-dragon Sherincal, the party arrived in Kuldahar. Here, they saved the settlement from a yuan-ti invasion by teleporting to Chult and dealing with the origin of the threat. After, the band found itself at the Severed Hand, they fought off many guards and made their presence known across all four floors.[1]

When this group of fateful adventurers finally confronted the twins for their evil actions and battled, the mythal completely attached itself to the Chaos Plane. Isair and Madae, weakened as they were from battle and as connected as they were to the defenses on the Hand, were dragged into Limbo. Their pained screams echoed throughout the collapsing stronghold; they were never heard of again.[1] 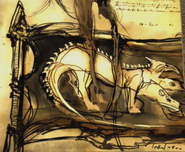 An illustration of the legion's flag, in Maralie Fiddlebender's book.