Leilon (pronounced: /ˈlaɪlɒn/ LIE-lon[6] or: /ˈleɪlʌn/ LAY-lun[6] or: /ˈlilɒn/ LEE-lon[6] or: /ˈlilʌn/ LEE-lun[7]) was a small mining town that served as a convenient resting place for weary travelers on the High Road along the Sword Coast between Neverwinter and Waterdeep.[1][2] According to Volo, northerners generally pronounced it LIE-lon while non-locals who learned the name from a map typically chose one of the other possible pronunciations.[6]

The town was abandoned following the Spellplague[8] but was rebuilt and was resettled in the late 15th century DR.[5]

Leilon sat on the edge of a shallow mudflat that extended to the Sea of Swords[2][9] with the crags of the Sword Mountains looming over the town.[4] The original town contained many stone cottages with slate or thatched roofs, the latter covered with hardened mud.[2] As the town was rebuilt in the late 15th century DR, much of the initial buildings were simple wooden constructions.[10]

Just to the south of Leilon was the Mere of Dead Men.[11]

In the Sword Mountains east of Leilon[11] was the dwarven hall of Southkrypt. It was a silver mine in centuries past but was abandoned and became the lair of monsters.[2] Southkrypt belonged to a realm of seafaring dwarves whose symbol consisted of a star, a fish, and a mountain peak. That symbol was sometimes seen on stones that were salvaged and used as building material by the people of Leilon.[12]

In the mid-to-late 14th century Leilon was an ally of Waterdeep and a member in good standing with the Lords' Alliance, thanks to the efforts of its leader Lord Pelindar Filmarya.[1][2]

In the late 15th century DR, Leilon was overseen by a town council loyal to Dagult Neverember, the Lord Protector of Neverwinter.[5] His chief lieutenants on the council were Grizzelda Copperwraught, who was in charge of efforts to rebuild the town; Sergeant Hazz Yorrum, leader of the local garrison of Neverwinter soldiers; and Valdi Estapaar, who was responsible for reviving the town's fishing industry.[10] Other members of the council included Merrygold Brightshine, the town's much beloved priest of Lathander; Jack Torver, an entrepreneur;[9] and Vangol Kuskolt, a judge and priest of Tyr.[4]

Trade by sea was dangerous, as the method required to transfer cargo from ships at sea to the land through the shallow mudflats was perilous. A fleet of a dozen barges, magically warded against fire and rot, were poled out to meet the ships, whereupon cargo was transferred using rickety cranes that were impossible to use in high winds. Instead of relying on this form of trade, most of Leilon's imports came by caravan out of Waterdeep. Leilon's eastern mines contained copper, nickel, and silver that was sold to Waterdeep merchants.[1][2]

Once a month (except during winter) a band of gnomes came to Leilon to engage in trade. They were from the gnome village of Ieirithymbul in the western Sword Mountains and were watched over by their protector, the gold dragon Palarandusk.[13]

Leilon did not have defensive walls, but instead had an earthen rampart with a wooden palisade and surrounding ditch. This protected it on the landward side except for the gateless entrance.[2]

The Leilon military, known as the Lances of Leilon, consisted of a force of 200 mounted soldiers. Each was fully armed with sword, axe, knife, lance and a light crossbow that could be fired from horseback with great skill. They wore chain mail with shields strapped to their chests and backs. These warriors were always on patrol, vigilant against raids by orcs, trolls, bugbears, bandits, and pirates. They also placed heavy guard on the mines, upon which much of Leilon's economy depended.[1][2]

Leilon's most defining landmark, the High Tower of Thalivar, was erected in the center of town by the wizard Thalivar sometime in the late 13th century DR, and was abandoned not long after when the wizard disappeared.[14][10]

In the Year of Shadows, 1358 DR in the month of Kythorn, a patrol from Leilon secretly followed a band of lizardfolk from the Mere of Dead Men. They counted at least twenty of them including a shaman. The lizardfolk crossed the River Dessarin and continued east.[15]

Also in 1358 DR in the month of Eleasis, twenty longships invaded Leilon. The raiders burned farms, stole livestock, and sank eight of the twelve barges. The Lances of Leilon inflicted heavy casualties and drove them off, but the raiders killed almost 200 townspeople and caused three months worth of Leilon's ore output to sink to the bottom of the ocean with the barges. None of the longships flew identifying colors, and magical interrogation of the dead provided several different answers including Luskan, Ruathym, Moonshae, and the Whalebones.[16]

That same year, in the month of Eleint, Lord Piergeiron of Waterdeep withdrew his ambassadors from Luskan and Ruathym and demanded reparations for the attack on Leilon from the High Captains of Luskan.[17]

The Spellplague of 1385 DR broke the magical wards of the High Tower of Thalivar and released all of its guardians, who then rampaged through the village. Any survivors that did not flee were then subject to the new magical forces from the tower that paralyzed all who looked upon it.[5] Leilon was abandoned at this point and everyone on the High Road took a wide detour around its ruins to avoid the sight of the tower.[8]

Following the Year the Iron Dwarf's Vengeance, 1485 DR, Lord Dagult Neverember wanted to support increased trade on the High Road to Neverwinter and ordered the High Tower of Thalivar be torn down. His forces were successful and Leilon's ruins began to be restored and repopulated. The new inhabitants all owed their allegiance to Neverwinter and its Lord.[5]

In the early 1490s DR, great strides had been made to rebuild both the town and the High Tower of Thalivar, now known as the House of Thalivar. However, the source of the tower's magical power became the focus of a conflict between two cults, one dedicated to conquest in the name of Talos and the other dedicated to restoring the power of the dracolich Ebondeath for the glory of Myrkul.[10][9] This reached a crescendo when the cults clashed with each other at the town in a three-way battle and siege known as the Battle of Leilon.[4]

As the town was abandoned and virtually destroyed during the Spellplague, the size and make up of the town was quite different once it was rebuilt in the late 15th century DR as compared to the 14th century DR. Some locations remained important across both iterations of Leilon:

Locations in the 14th Century DR[]

Locations in the 15th Century DR[]

In the 14th century DR, Leilon was the base of operations of the adventuring company known as the Swords of Leilon.[20] A number of these adventurers were killed during the Spellplague, and their ghosts became bound to the town's ruins, protecting it even in death.[4]

Despite the high quality of law and order in the town, there had long been rumors of the Cult of the Dragon and the Zhentarim operating within the town walls. The presence of Zhent agents may have indicated an attempt to secure a trade route. There were also tales of local cults who worshiped undead wizards or spirits of the mines.[2]

There was, in fact, a Dragon Cult cell in Leilon that had dealings with a black dragon living in the Mere of Dead Men named Voaraghamanthar.[21] 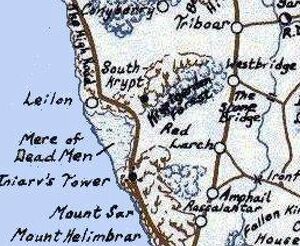 Map of Leilon and surrounding area, circa 1358 DR. 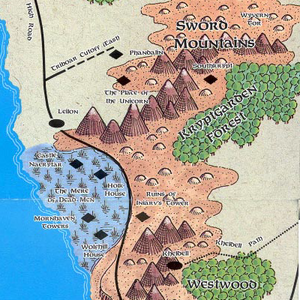 Map of Leilon and the surrounding area, circa 1370 DR. 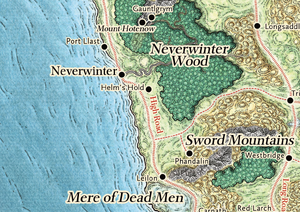 Map of Leilon and surrounding area, circa 1491 DR. 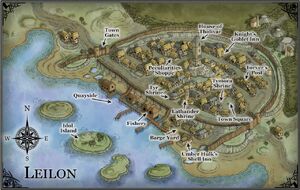 Labeled map of a recently rebuilt Leilon circa 1491 DR.