H. P. Lovecraft's lich (in "The Thing on the Doorstep") and Gardner Fox's sorcerer (in "The Sword of the Sorcerer")
A lich (pronounced: /lɪtʃ/ litch[6][7]) was an almost universally evil form of undead spellcaster of great power, usually a wizard, but also possibly a sorcerer or cleric. Liches were feared by mortal beings for their malign magic, their intelligence, and their willingness to embrace undeath for a chance to live forever (or rather, exist forever).[3]
“
-My whole life has been in pursuit of these runes. And now, to find them here, broken and incomplete…
-Perhaps you can now understand why one lifetime is not nearly enough.
”
— Nevron, the Zulkir of Conjuration and Szass Tam, the lich Zulkir of Necromancy[8]

Liches were generally gaunt and skeletal with withered flesh stretched tight across horribly visible bones but could vary greatly in appearance depending on their age. Some appeared as skeletons dressed in regal finery, yet others might appear to be nothing more than lepers. Bright pinpoints of crimson light burned in the empty sockets of those whose eyes had been destroyed or otherwise lost or were so old they had simply rotted away.[3] They were often clad in dark, tattered robes.[9] When moving, they seemed to glide as if floating on water.[10]

Liches often did not have lips or the necessary organs to produce natural speech, but they had the ability to project speech from their mouths magically, moving the jaw (if present) to aid the illusion.[11]

Because liches had eternal longevity, they often used this time to form schemes that took decades to develop, sometimes preferring to outlive a foe instead of confronting it, and as such most liches lived in secluded areas of Toril, where they were content with furthering whatever research or plots they had in motion.[12]

The process of achieving lichdom required that the spellcaster construct a powerful magical artifact, a phylactery, in which the lich stored its life essence. As long as this phylactery was unharmed, the lich was immortal and would attempt to reassemble if it was ever vanquished (this happened within 10 days after its apparent destruction). It did not, however, grant any of the normal benefits of a phylactery until it was fully completed. For these reasons, liches took great care in protecting their phylactery from harm, employing decoys, traps, and other defenses.[3]

The most common physical form for a phylactery was a sealed metal box containing strips of parchment on which magical phrases had been transcribed. Other forms of phylacteries existed, often small or tiny trinkets such as rings, amulets, or similar items. It could also take other shapes if the lich expended more gold and experience to make such alterations.[3]

When the phylactery was created, the wizard transferred a bit of life force into the creation. While crafting the phylactery taxed the physical strength of the caster, the materials and components could easily exceed 120,000 gp. Overall, creating a phylactery was a very daunting task for anyone of arcane power.[3]

Alhoon
An alhoon was an illithid lich.
Archlich
While the overwhelming majority of liches were evil, an archlich was not. One such good lich was Lady Alathene Moonstar of Waterdeep. Lady Alathene was devoted to hunting down her brother Lord Vanrak who had become a murderous undead champion of evil. Archliches were able to memorize spells through intuitive nature and did not need spellbooks; they also remained in their form for eternity.
Banelich
Clerics of Bane transformed into undead servants by the God of Tyranny. As baneliches grew older, their powers increased as well, until they were as powerful as any other lich.
Baelnorn
An elven archlich was called a baelnorn. They did not use phylacteries as their undeath was gifted to them by the Seldarine. Elven liches become undead to become backbones of their family. They were sources of magic, wise council, and guardianship.
Demilich
This advanced form was achieved when a lich felt it could not learn any more in its present state and sought other avenues to attain knowledge. It might do so by using astral projection to travel to other planes of existence.

Dracolich
A dracolich was a dragon who had achieved lichdom. The process required to do this was discovered by Sammaster, former Chosen of Mystra.

The ground-up bones of a lich were used as a component in the casting of the necromantic spell soul scour.[13] 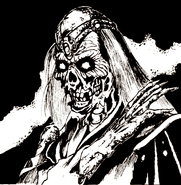 A lich from 2nd edition. 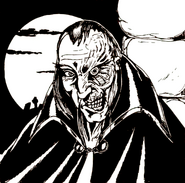 A presumable lich from 2nd edition.