Joybringer[1]
Mistress of Revels[1]
Our Lady of Joy[1]

Gates of the Moon

Quarter of the Orange Lanerns

Three six-pointed stars forming a triangle with their points touching, with an orange star on the top, a yellow on the left and a red on right

Any, though evil worshipers were rare

listen), known as Our Lady of Joy, was a good lesser deity and later exarch of Sune responsible for the sphere of joy.[5][15]

Lliira hated most forms of violence, especially at celebrations. She was known to withhold her blessing from celebrations marred by it.[16]

Lliira resided within the divine domain of Brightwater, sharing it with the goddesses Sune and Tymora.[17]

When Lord Ao cast nearly all the Faerûnian deities into mortal avatar form and scattered them across the surface of Toril, Lliira was among them, As luck would have it, the first being she met was the avatar of Waukeen. Having been on good terms prior to this, the two goddesses decided to stick together while they worked out a plan of action.[18][19]

Waukeen advocated a straightforward approach: climbing the Celestial Stairway from its landing in Shadowdale and bribing Helm with his heart's desire to allow the two of them back into the Outer planes. Not known for her ambition, Lliira went along with the young and brash Waukeen's plan. They traveled to Shadowdale and began climbing the Staircase, when halfway up the stairs Helm appeared and threatened them. The two of them offered him many things, but nothing could entice the God of Guardians to shirk his duty. Weary of facing his wrath, the two goddesses then retreated into the forest of Cormanthor to devise a new plan.[18][19]

Being intimately familiar with illicit trade as well as legitimate commerce, Waukeen came upon the idea of smuggling her way into the Outer Planes by means of a convoluted route through the Astral plane and Lower Planes. An outsider deity known as Celestian agreed to transport Waukeen to the Astral plane as payment for a past debt, but would not go so far as to include Lliira in the bargain, for fear of the added risk. When it came time to go however, they discovered that Waukeen could not leave the Prime Material plane, for Lord Ao had bound the Faerûnian gods to Toril with an unbreakable bond.[20]

Waukeen came to the conclusion that it was her divinity that bounded her to the plane. At her request, Lliira promised to hold Waukeen's power and portfolio in stewardship until she could reclaim it.[19][20][9] During this time she took her High Revelmistress of the city of Selgaunt, Chlanna Asjros, as a lover. Sometime after this period, a local cult of Loviatar murdered the priestess and this deeply affected Lliira.[21]

Ten years later Waukeen was still no where to be seen, having become trapped in the Abyss, and Lliira became increasingly worried over her friend's disappearance. No matter what she tried Lliira could not locate her and she watched as the Church of Waukeen gradually fell apart.[19]

In 1365 DR, Lliira came to the conclusion that she would need to take control of the Church of Waukeen in order to preserve what she could for her friend when she eventually returned,[9] reasoning that if she didn't a more basely motivated power would take it over.[19] She transported her prophet to the gate of every temple to Waukeen. He was was instructed to tell the worshipers there-in of Waukeen's uncertain status and that Lliira would be acting as regent for Waukeen's portfolio until she returned, answering any prayers for spells. But many of the Waukeenar, distraught and panic stricken, interpreted this to mean that their goddess was truly dead and they publicly announced it throughout the Realms.[19][9]

The Church of Waukeen flourished under Lliira's regency.[22] However, she regularly felt uncomfortable with her role as regent and constantly felt tempted to completely fold Waukeen's power into herself. However, she managed to resist this urge, motivated by her sense of loyalty to her friend and her desire to respect her promise.[9] When Waukeen eventually returned, Lliira graciously returned her mantle of divinity.[23]

Among the Faerûnian pantheon, Lliira's best friends was the deity Milil, due to him sharing of her love for revelry.[5][9] Another deity she was good friends with for this reason was the goddess Sharess.[24] For a time they had a falling out due to her corruption by Shar, but following her salvation through Sune during the Time of Troubles their relationship was rekindled.[25] She was also allied with the deities Deneir and Oghma, but refused to view the latter as her superior.[9]

Prior to the Time of Troubles another good friend of hers was the goddess Waukeen. Her disappearance during this time lead many of her followers disaffected. When Lliira started answering their prayers in Waukeen's stead many of the Waukeenar assumed their goddess was dead and turned to the faith of Lliira, rededicating their temples to her.[21][10][26]

When Waukeen eventually returned she was jealous and upset that so many of her faithful did not return to her service, and thus the friendship between the two goddesses became slightly soured.[21]

Both the specialty priests and clerics of Lliira were known as "Joybringers" until 1365 DR, when members of the clergy became confused by the naming scheme. From that year onward the specialty priests were distinguished by the title of "Joydancer."[14] Her clergy were renowned throughout Faerûn for their easy going and good-hearted nature, making them some of the most popular clerics in the continent.[5]

Following the Time of Troubles, a rumor arose that she hunted down and murdered the goddess Leira during this time for having a similar name to her. However, no evidence of this has ever arisen and is thus considered a falsehood.[11][9]

Some speculated that the leaders of the mercantile organization Iron Throne, whose identities were a mystery, were devotees of Lliira.[30] 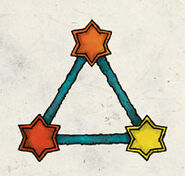 A depiction of Lliira's holy symbol. 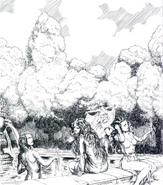 From left to right: the goddesses Hanali Celanil, Sune, Lliira, and Sharess bathing in the pool of Evergold.
Add a photo to this gallery