Forgotten Realms Wiki
Register
Don't have an account?
Sign In
Advertisement
in: Locations, Settlements, Locations in the Ten Towns,
and 6 more
English

"Home of the Halfling Hero"[1]

Lonelywood was a town in Ten Towns within the cold region of Icewind Dale.[2] It was known as being the "first choice" for rogues seeking a refuge in Icewind Dale.[1]

“
Mostfolk in Lonelywood went there tryin' to forget about somethin'... or tryin' to be forgotten. Folks there mind their own business, an' they expect ye to do the same. Surest way tofind trouble in that town is to start askin' questions.
”
— Beorne Steelstrike[4]

This northernmost town was surrounded by the Lonelywood Forest, with Maer Dualdon on the west side and the Bryn Shander Trail on the east.[2][7] By 1351 DR, Lonelywood consisted of mere several dozens of low wooden cabins and inhabited for people who wanted to disappear from other part of the world, a place where "the rogues of rogues hid out".[8]

The Lonelywood Forest was rich with fir trees, allowing Lonelywood to be the main producer of lumber in Icewind Dale. The trees from Lonelywood were used to build all structures across the Ten Towns.[9] The timber gets carted from Lonelywood to Termalaine or Targos, and occasionally, to Bryn Shander.[10] The town maintained insignificant fishing fleet, easily overshadowed by all nine of other neighboring towns.[11]

Lonelywood's spirit of community was strong. A successful hunter was bound to share their catch, beyond one full meal a day, equally among the inhabitants of the town.[12]

Small in size, lacking in walls, Lonelywood, along with Termalaine, were two of the most raided towns of Ten Towns and gladly accepted aid from their neighbors during the times of strife.[11]

Before Drizzt Do'Urden journeyed to Icewind Dale, Regis was the "leader" of the town, but in 1351 DR after Wulfgar's people raided Ten Towns, Regis retired as council spokesman, although the city continued to use him to "market" the town.[13] Even after his move to Mithral Hall, he maintained a home there for some time.[1] Following the barbarian attack on the Ten Towns, Lonelywood's population increased dramatically, unlike its neighbors. The town welcomed the influx of inhabitants and even promoted itself as the "Home of the Halfling Hero." This rise to prominence managed to shake the town's reputation of being a roguish town.[14]

Muldoon became the next town spokesman in 1351 DR. He was originally from Waterdeep, but came to Lonelywood with his father when his father was kicked out of Waterdeep (although he later returned). Muldoon became a successful merchant and council spokesman.[15] However, sometime before 1369 DR, Regis returned to the Speaker's seat following his predecessor's demise inside a Yeti. The folk of Lonelywood asked the Halfling Hero to lead the city once more, with the blessing of Bruenor Battlehammer.[16]

During Regis' return to the Speaker's seat, he operated out of his humble store, the Bone Words. He was visited by a group of adventurers who were tasked with uncovering the location of the long-lost Accursed Tower that disappeared off the coast of Maer Dualdon circa 1269 DR. Subsequently, with the halfling's help, the adventurers discovered that the tower of Damien Morienus stood across from Lonelywood, on the western side of the lake.[17][18]

Regis returned to Lonelywood in 1483 DR and once again purchased a house there, spending time "fishing" in Maer Dualdon. In the forest not far from his house, Catti-brie built a small garden shrine to Mielikki.[19]

In time of war, Lonelywood could muster a militia of around 100 humans who were armed with dwarven weapons and light armor.[3] 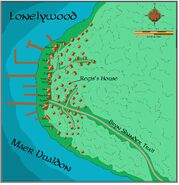 Lonelywood as shown in Icewind Dale

Adventures
The Accursed Tower
Novels
The Crystal Shard • Sea of Swords • The Pirate King • The Companions
Referenced only
The Spine of the World • The Thousand Orcs • Timeless
Video Games
Icewind Dale: Heart of Winter