6‒7 ft (1.8‒2.1 m)
Loup garous were more powerful cousins of the standard werewolves[4] who were affected by an extremely virulent type of lycanthropic curse.[1]

Like other lycanthropes, loup garous were shapechangers who could shift between the humanoid, a man-wolf shape, and fully lupine form that of a large wolf. In their hybrid form, an average loup garou appeared exceptionally muscular, covered in thick wolf fur, and stood at 7 feet (2.1 meters) tall. They had a short tail, wolf-like legs, and head. While in man-wolf shape, they walked upright, like most humanoids, and had agile hands with opposable thumbs. Unlike the full-wolf shape, they could speak in the hybrid form. However, their voices sounded deep and hoarse. Both hybrid and wolf shapes allowed them movement speed far superior to that of a humanoid. The wolf form looked similar to a large worg, while mountain loup garou appeared even bigger than their lowland cousins.[3]

Mountain loup garous had red eyes that glowed with malice when in hybrid or wolf form.[2]

Loup garous were naturally resistant to magic and retained their keen minds in all three forms[3]. These bestial creatures could only be harmed by weapons made from silver or magical weapons,[4] though the latter were less effective. Weapons that have been blessed by divine magics were virtually useless against loup garou and barely left a scratch on their hides.[3]

Mountain loup garous' magical resistance was significantly more effective than their lowland kin's. They could regenerate[1][3] and were only vulnerable to magical or gold weapons.[3]

They were known to be immune to charm and fear.[1]

These lycanthropes were not just more dangerous and bigger than ordinary were-beasts, but they also aggressively aimed to spread their affliction onto their victims. The only way of curing a loup-garou of this curse was by slaying the very beast that infected them. But even after the death of the monster who infected the afflicted, the plague may presist. To successfully remove the affliction, a powerful priest had to pray to their deity to remove curse during the first full moon night after the beast was slain. If the attempt failed, the lycanthrope remained curse until the next full moon when another attempt could be made.[1]

Loup garous' tactics varied depending on their number, skills, and shape. On average, it took them six seconds to fully transform from one form to another. While they were in humanoid form, they could employ the widest array of skills and abilities, from wielding weapons to casting arcane or divine magics. The most common vocation among them, however, was warrior's or rogue's.[3]

When they shifted into the hybrid form, they ferociously raked their opponents with both their clawed hands and tried to sink their teeth into the target. Occasionally, loup garous in the man-wolf shape were known to wield weapons, but they preferred unarmed animalistic savagery as the more expeditious way of ripping their opponents apart.[3]

In the wolf form, loup garous used their speed and vicious bites to kill the prey. This agile form allowed them to lay in ambush and gave them keen senses of a wild beast.[3]

Lowland loup garous, the smaller of the two species, could be found wandering the plains and hills of Domains of Dread and outskirts of Barovia. They hunted in packs and preferred human meat to all else. They laired in caves or secluded ruins. However, it was not unheard of for them to travel in humanoid forms and frequent inns. Loup garous considered other lycanthropes and especially werewolves to be their enemies.[3] 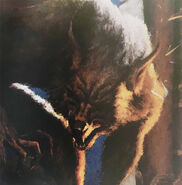 A fierce loup garou breaking through a window.