Start a Wiki
This article is about the region. For the sourcebook, see Silver Marches (sourcebook).

War of the Silver Marches

Luruar, also commonly known as the Silver Marches, was a confederation of cities in the north of Faerûn, under the leadership of Alustriel Silverhand, former ruler of Silverymoon. It consisted of Silverymoon, Citadel Adbar, Deadsnows, Jalanthar, Quaervarr, Citadel Felbarr, Everlund, Mithral Hall, and Sundabar, and its goal was to protect the North against the growing horde of orcs in the mountains.[1] The nation was also a member of the Lords' Alliance.[2]

It was bordered by the Anauroch desert to the east, the High Forest to the south, the Savage Frontier to the west and the Spine of the World mountain range to the north. It also shared a border with the kingdom of Many-Arrows.[citation needed]

The years 1368 through 1370 DR were particularly turbulent for the city states of northwest Faerûn. Troll attacks, orc hordes,[3] an army of demons and barbarians as well as a particularly harsh winter spurred the leaders of those cities to convene a council. After many heated arguments were calmed by Alustriel's diplomatic skills, it was decided that the cities would band together and form a confederation under Alustriel's leadership.[4]

When Alustriel left, her eldest son Methrammar Aerasumé took over and immediately lost the support of Citadel Adbar, Citadel Felbarr and Mithral Hall whose leaders refused to spend effort and resources helping smaller settlements at the expense of their own. Though the three cities remained allies of Luruar, they no longer considered themselves members of the confederation, nor could they be relied upon to answer calls for help.[citation needed]

In 1484 DR, the Darkening was cast over the region in preparation for the drow and orc invasion.[5] The attacks involved sieges and attacks on Winter-Edge, Mithral Hall, Nesme, and Silverymoon, as well as subterfuge interfering with trade in Blingdenstone. The spell was finally overcome by a band of adventurers, during the battle of Eryndlyn.[6] Ultimately however, thanks to disagreements following the war, the League of Silver Marches was disbanded in 1488 DR.[7] The Silvaeren were blamed for providing insufficient aid for Sundabar, whose surface population had been completely wiped out. As a result, all of the dwarven states left the League of Silver Marches, and without their support, Luruar collapsed.[8]

Cold Wood
A pine, birch and spruce forest that has remained unmarked by civilized settlers or foresters. While home to some of the Uthgardt tribes, orcs and ettins have also been known to roam the woods.[1]
Moonwood
This large forest north of Silverymoon was free of goblinoid races. This is due to the large population of lycanthropes, many of whom are members of the People of the Black Blood.[1]

Nether Mountains
There were many monsters that spread from these mountain ranges to as far out as Silverymoon.[1]
Rauvin Mountains
The River Rauvin passes through the peaks in a steep-sided, mist-filled gorge of roaring white water. There was a perilous trail in the gorge that runs through the Dead Orc Pass to the north side of the Rauvin that contains a strong and aggressive orc tribe.[1]

Beorunna's Well
The ancestral home of the Black Lion tribe of Uthgardt barbarians.[10]
Citadel Adbar
A powerful, hard-to-reach stronghold of the dwarves.[10]
Citadel Felbarr
This former dwarven citadel that, since 1367 DR, has been inhabited by humans, orcs and most recently, dwarves once again.[10]

Everlund
A walled city that was home to several races and is ruled by the Council of Six Elders.[10]

Jalanthar
Many human trackers, hunters, guides and trappers could be found in this small town. Many of whom were experts of dealing with the orcs, most often in a violent manner.[10]

Mithral Hall
Once one of the greatest shield dwarf holds, it still was home to their kin.[10] It has been inhabited by duergar until it was recaptured by Clan Battlehammer and their allies[11] in 1357 DR.[citation needed]

Quaervarr
This small woodland town is comprised of humans and half-elves.[10]

Silverymoon
A bastion of culture and learning in the Silver Marches. After Lady Alustriel stepped down to lead the nation, the city was handed to Taern "Thunderspell" Hornblade.[12]
Sundabar
This city of war was home to miners and crazed orcs.[2] 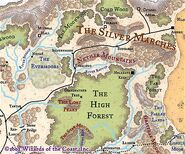 Retrieved from "https://forgottenrealms.fandom.com/wiki/Luruar?oldid=468416"
Community content is available under CC-BY-SA unless otherwise noted.