Lycanthrope (European)
A lycanthrope (pronounced: /ˈlaɪkənθroʊp/ LY-kən-throhp[2]or: /ˈlaɪkænθroʊp/ LY-kæn-throhp[2]), also known as a werebeast, weretype,[3] or nightwalker,[4] was an individual who possessed the condition of lycanthropy.[5]

Lycanthropes were shapechangers with at least two forms, that of a humanoid and that of a particular kind of animal. In humanoid form, they appeared no different than a typical specimen of that type and their natural life expectancy was the same.[6] Lycanthropes could disguise themselves somewhat through their shape-shifting abilities, either taking on a form almost identical to a humanoid but with subtle details revealing their true nature such as pointed teeth or long fingernails. Similarly, lycanthropes could assume an animal form, which would be a perfect disguise except for the unusual spark of intelligence in their eyes that sometimes gave them away.[7] Some lycanthropes could also take on an intermediate "hybrid form", superficially resembling their humanoid form but with the head of the specific animal whose shape they could also take.[citation needed]

There were several different categorizations of lycanthropes in the Realms, and many related beings.[5]

Often called lycanthropes, these were humans or giants that could transform into an animal or a monster. Therianthrope type names often had the prefix, were. One became a lycanthrope in several different ways and, accordingly, they had different terms to describe them.

True
Lycanthropes that contracted their condition as a hereditary trait, and could breed with other true lycanthropes to produce lycanthrope offspring. This form of lycanthropy had no cure, except occasionally a wish spell.
e.g., a werewolf born to true werewolf parents.

Infected
Lycanthropes that contracted their condition by being injured (usually bitten) by a true lycanthrope.
e.g., a human bitten by a true wereshark may become infected.

Induced
A being affected by magical items, causing them to turn into a lycanthrope. These beings could not transmit lycanthropy to others.
e.g., swanmay, who willingly accepted feathered tokens.

Cursed
A being affected by a curse, either from a spell or other means.

These beings had similar qualities, but were not technically lycanthropes:

Antherions
Shapechanging creatures, but transformed into humanoids from their original animal state, instead of the other way around. Antherion type names often had the suffix, were. They hated lycanthropes, as lycanthropes hated them.
e.g., jackalwere

Others
Other races that had similar qualities to werebeasts, or resulted from the inter-breeding of lycanthropes with humans.
e.g., shifter

No one deity in the Realms truly had the condition of lycanthropy as a part of their divine portfolio, though priesthoods had conflicting claims on this topic as there were some gods often associated with the condition. Malar and Selûne were two such gods,[10] believed to have in their portfolios evil and neutral lycanthropes respectively.[11] Of the two Selûne was the most closely associated, though worshipers of Malar would claim otherwise.[10]

Some said that thousands of years ago, the god Malar used barbaric human tribes to create the original lycanthropes, providing them with qualities of the predatory animals they admired. Others said it was a blessing from Selûne to a group of young human orphans to help them survive in the dangerous wilds. Either way, these ancient bloodlines were passed down through generations.[6]

A natural line of elven werewolves known as lythari dated back to the first elven explorations of Faerun, and the good members of their kind lived among the moon elf and wood elf communities for thousands of years.[6]

Many new forms of lycanthrope were said to have appeared following the Time of Troubles in 1358 DR.[12]

A wererat, a werewolf, and a werebear. 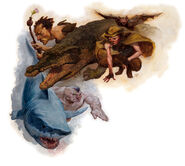