Magic missile was a spell that cast bolts of pure force from its caster's fingertips.[citation needed]

Before the Spellplague and after the Second Sundering, magic missile grew in power as its spellcaster did, so that more experienced wizards or sorcerers cast more bolts with a single spell than those with less training. Like nearly all spells of the time, it required careful preparation before its casting, and a wizard could only cast the spell as many times as they had prepared it for the day, before the memory of how to cast the spell fell from the mind of its caster.[5][2]

The missile manifested itself as a silvery bolt of energy,[citation needed] and while the spell was simple, it could be deadly to weaker opponents. Magic missile was so simple that it required little concentration or preparation on the part of the wizard casting it. Very powerful wizards were able to cast a magic missile of twice the equivalent power of inexperienced mages. Between the Spellplague and the Second Sundering, magic missile could be cast over a distance of about 100 feet (30 meters).[4] In other periods, that range was about 120 feet (37 meters).[2]

Magic missile could only be blocked by a shield spell.[11] However, it could not inflict damage to the hull of a spelljammer.[12]

The appearance of a magic missile could vary greatly. For example, Cybriana's early magic missile created a massive gout of fire from her palm,[13] while Kyriani Agrivar (in fact, a transformed Cybriana) produced more conventional streaks of green globes from her finger tips.[14][15] An avatar of Shar later fired yellow-green beams from her fingertips at her during the Time of Troubles.[16]

The spell only required verbal and somatic components.[2]

In 2268 NY (−1591 DR), at the height of the Golden Age of Netheril, this spell was introduced by famous Netherese arcanist General Matick under the name of General Matick's missile. Many scholars believed that he commissioned the spell rather than inventing it himself.[1][17]

Throughout the years, the fundamental specifications of magic missile have been used in the development of several other spells. In the 13th century, Snilloc's snowball was invented by the adventurer and spell-crafter Snilloc.[18] It was considered a lesser variant of magic missile by many mages throughout the Realms.[19]

Gemidan, a former apprentice of Khelben Arunsun, created a variant called lightning bug that combined its effects with those of shocking grasp.[20]

Another variant of this spell was slingstar, which allowed a mage to imbue her or his sling with magical energy. The caster evoked a number of magic missiles by using small stones or bullets as an added material component.[21]

The half-elf magic-user Cybriana, who was later transformed into the famed half-drow wizard Kyriani Agrivar, knew magic missile. In the Year of the Prince, 1357 DR, Cybriana fired fiery magic missiles at first a chasme then a gargoyle, slaying them.[13] In the Year of Shadows, 1358 DR, when Kyriani was briefly turned back into Cybriana, she used magic missile, in the form of a pale-green streak of darts, against a kenku.[14] During the Time of Troubles, when magic went awry, her attempt to cast magic missiles failed, instead producing a shower of pink flowers.[22] Kyriani later fired four green magic missiles at the marauding Fellandar, though thanks to his magical resistance, he knocked them away with his fist.[15] 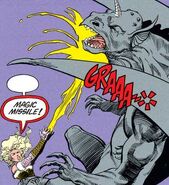 Kyriani casts a fiery magic missile from her palm at a gargoyle.

Shar hurls a barrage of magic missiles at Kyriani.

Kyriani casts magic missiles as green darts from her fingertips. 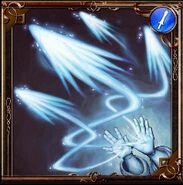 A wizard launches magic missiles into the air.
Add a photo to this gallery

Retrieved from "https://forgottenrealms.fandom.com/wiki/Magic_missile?oldid=591496"
Community content is available under CC-BY-SA unless otherwise noted.