Primordial
Magma brutes were one of the two more humanoid-shaped species of magma beast.[1]

Magma brutes were one of the more intelligent species of magma beast and were ill-tempered.[1]

Like all magma beasts, brutes were immune to the effects of petrification, had some resistance to fire, and were particularly vulnerable to cold-based spells and abilities.[1]

As befitting their name, magma brutes fought by bashing enemies with their fiery fists.[1]

Following the Spellplague, many magma brutes made their way through elemental vortices and planar rifts into volcanic regions of Toril's and the Underdark.[1] In 1479 DR,[3] magma brutes could be found inhabiting Mount Hotenow.[2] Around that time, some were serving Vanifer and her Cult of the Eternal Flame.[4]

Like all magma beasts, brutes were capable of speaking the Primordial language.[1]

Brutes could be bribed with regular offerings of food. They occasionally bullied claws and striders into fighting alongside them. Brutes themselves were often easily persuaded or intimated into serving more powerful elementals, including fire archons, fire giants, salamanders, or even an eye of flame.[1]

Like all magma beasts, a brute could subsist on merely clay, ores, and even minor elementals. Though they preferred to hunt and feast upon organic creatures, savoring the taste of burned flesh. Whenever they killed a humanoid they would devour them whole, including their equipment.[1]

These creatures were native to the Elemental Chaos.[1] 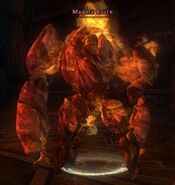 A magma brute, as depicted in the game Dungeons & Dragons Online.

A magma brute, as depicted in the D&D Miniatures set "Dungeons of Dread."