"The gods do not grant to us all
The shining mantle of the hero.
Do what you can,
And it will be enough."
— Baerauble, Lord High Mage of Cormyr,
inscribed on his tomb and a popular Cormyrean saying

Before the Spellplague, Delzimmer sat on trade routes that connected Dambrath, Luiren, Estagund, the Great Rift, the Shaar, Lapaliiya, the Vilhon Reach, and the Old Empires of Unther and Mulhorand. To the north and east of Delzimmer were the nearby foothills of the Toadsquat Mountains. North and west were the Eastern Shaar, the Riftwood, and the Trader's Way to Eartheart and beyond. To the southwest were miles of open country before reaching the Forest of Amtar. Due south was the road to Cathyr in Dambrath, and to the southeast was the road that split the Lluirwood from the Southern Lluirwood leading to Beluir in Luiren.

After the Spellplague, the Great Sea swallowed much of Luiren, the Lluirwood, and the lower Toadsquat Mountains, bringing the shores of the new Gulf of Luiren nigh to Delzimmer, and in a short time, the city became a shipping port.

Delzimmer had no nobles, but was ruled by the four most powerful merchant families, the Belarks, the Harlhauns, the Jathlets, and the Olaundrans. These oligarchs ruled by fiat, not because anyone had given them authority, but because they each had their own small army and no one could gainsay their actions. The regional term for this sort of petty ruler was "satrap". 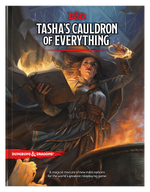 Tasha's Cauldron of Everything is a new sourcebook for the 5th-edition Dungeons & Dragons ruleset released on November 17th, 2020. It presents a variety of character options, spells and magical items, puzzles, and expanded rules for various situations.
“
A magical mixture of rules options for the world's greatest roleplaying game.

The wizard Tasha, whose great works include the spell Tasha's hideous laughter, has gathered bits and bobs of precious lore during her illustrious career as an adventurer. Her enemies wouldn’t want these treasured secrets scattered across the multiverse, so in defiance, she has collected and codified these tidbits for the enrichment of all.
”
(Read more...) 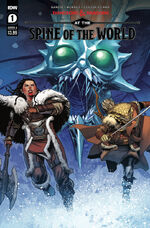 At the Spine of the World #1 by AJ Mendez and Aimee Garcia is the first issue in the new "At the Spine of the World" series published by IDW Publishing in November, 2020
“
A never-ending winter's night is slowly driving an isolated town in the depths of Icewind Dale to the brink of insanity. To save them all, a perilous journey awaits a band of adventurers as they uncover the plot of an ancient primordial evil!
”
(Read more...) 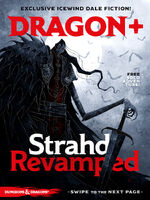 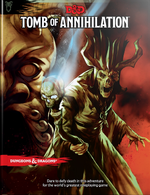 Tomb of Annihilation, designed by Christopher Perkins, Will Doyle, Steve Winter, and Adam Lee, is an adventure module set in the Forgotten Realms using the Dungeons & Dragons 5th-edition ruleset. Set in the late 15th century DR, it explores the distant land of Chult and introduces the mighty lich Acererak to the Realms.
“
Dare to defy death in this adventure for the world's greatest roleplaying game.

The talk of the streets and taverns has all been about the so-called death curse: a wasting disease afflicting everyone who's ever been raised from the dead. Victims grow thinner and weaker each day, slowly but steadily sliding toward the death they once denied.

When they finally succumb, they can't be raised—and neither can anyone else, regardless of whether they’ve ever received that miracle in the past. Temples and scholars of divine magic are at a loss to explain a curse that has affected the entire region, and possibly the entire world.

The cause is a necromantic artifact called the Soulmonger, which is located somewhere in Chult, a mysterious peninsula far to the south, ringed with mountains and choked with rainforests.
”
(Archive | Read more...)

...it is 2 Nightal, or the 2nd of the Drawing Down. Selûne is a waning gibbous moon

An elf in the Feywild.

Note: Copied text is not accepted on this wiki.
Beware: This wiki does not provide spoiler warnings.

Retrieved from "https://forgottenrealms.fandom.com/wiki/Main_Page?oldid=601677"
Community content is available under CC-BY-SA unless otherwise noted.