15 lb (6.8 kg)[6]
A mane (or manes singular and plural[1]) was a demon formed when a chaotic evil soul died and was sent to the Abyss.[6][1] Manes were considered the "fodder" of the Abyss and below all other tanar'ri.[7]
“
Have no pity for this damnable wretch. Bloody thing could grow up to be a demon lord one day.
”
— Emirikol the Chaotic[1]

Manes were approximately 3 ft (0.91 m) tall humanoids that were surprisingly light for their build, weighing only 15 lb (6.8 kg).[6] Their bodies were pale, bloated, nearly hairless, and crawling with maggots that actually fed on them. Both their eyes constantly dripped disgusting liquids, and showed no signs of sentience. Their jagged teeth and cruel claws complimented their feral minds.[4]

Manes would normally make a decent rank-and-file combat force as their pure hatefulness drove them to attack any non-demonic entities they encountered.[6] Unfortunately for other tanar'ri, manes were also incredibly stupid and difficult to control, although not due to rebelliousness. For example, manes armed with weapons would, soon after being instructed on what to do with them, forget their purpose and fight like wild animals.[4] Objects carried no value to the manes as they only cared to fight and fought with what they already had.[3][6]

They had no sense of self preservation and would continue to attack in a way detrimental to their own survival and those of their respective armies.[4] Although they could not speak, they were able to understand simple concepts as a side effect of their limited tanar'ri telepathy, and could understand more complex commands made in Abyssal.[3] When not actively being told what to do, they traveled in packs wandering the Abyss or acted simperingly towards higher demons.[6]

“
You want to understand the tanar'ri? Here's how. Look into yourself. Find the core of hatred there. Don’t worry if you can’t find it right away. Just keep searching. Eventually, you'll peel away the skin of what you thought was virtue and find a writhing pit of darkest sin... Hold that malevolent core in the palm of your mind for a time. Picture it expanding, slowly growing to become the size of your entire heart. Feel it thumping in your chest, stronger and stronger, attuning every fiber of your being to its wicked rhythms of pain and horror. Can you imagine the groundswell of rage needed to make it grow this large, the anger that would drive you ever onward with a heart choked by unreleased fury? You can? Good. Continue. You haven’t even understood what it means to be a manes yet.
”
— Jessyme Rauch, tanar’ri specialist extraordinaire[8]

Most manes lost their memories in the traumatic process that granted them their forms, a combination of psychic agony and overpowering shock from transformation, left them with only a vague, persistent sense of loss and the bitter, crazed rage that resulted from it.[9] A rare few manes retained fragmented memories of their mortal lives, but in most cases they were mere beasts.[6] Occasionally they gained the self-awareness needed to recognize the gap in power between them and all that surrounded them and so fought to improve their positions, a struggle that rarely ended in success.[10]

Because manes would quickly forget why they were given weapons, it was easier for higher ranking demons to simply let them fight with their natural weaponry.[4] Due to their lack of proper sentience, manes could not be magically mind controlled.[1] They were ineffective combatants akin to sluggish dogs although their innumerable quantities compensated for their weakness.[3]

Some manes wandered the Abyss in swarms, usually comprised of a dozen or so individuals. However, wild manes could also travel in massive hordes of up to a hundred at a time creating devastating demonic forces.[3] Manes were viewed by other tanar'ri as an expendable fighting force similar to dretches, but not truly as soldiers as they could not be outfitted or given complex orders.[4][3] Instead, manes functioned as controlled fires, grouped into legions of thousands or more and set to march in specific directions or placed in certain areas to overwhelm selective targets.[6]

The station of manes was so low that to most tanar'ri they were viewed as sub-tanar'ric monsters, just petitioners worthy of nothing but scorn and contempt.[4] At the same time, since manes were the former souls of the dead who found themselves in the Abyss, the number of manes was almost always growing, so much so that non-tanari feared them in general.[5] A majority of demon lords and demon princes used manes as a food source, and devouring them would permanently erase them from existence.[5] Many were traded within Abyssal citadels as slaves and used as currencies between evil spellcasters and outsiders.[6] Manes that resided within Gehenna were often the most evil among them and sent to the mortal realm for 24 hours to sow chaos and destruction.[5]

Otherwise, manes that showed a glimmer of intellect or a particular cruelty might be promoted by more powerful tanar'ri and transformed into higher ranked demons.[6] Orcus himself could transform the corpse-like manes into more conventional undead like ghouls or shadows depending on their wickedness in life.[1] Manes were just as likely however, to have their numbers culled out of a pragmatic fear of their spontaneous transformations, as so many existed that the probability of one rising to demon lord status was an unsettling possibility.[2]

Manes could not be truly killed except under very specific circumstances and normally when slain their bodies would disperse into a noxious vapor before reforming in the Abyss a day later.[1] Unlike most demons, who rose in power based on how many they killed, manes could be transformed by the forces of the Abyss into more powerful tanar'ri at random. These transformations were largely unpredictable ranging from as simple as a rutterkin to as strong as a vrock. Manes with memories left were more likely to advance like this and the most despicable of them could transform into balors or even molydei.[6]

Like dretches and rutterkins, chaotic evil mortals occasionally reincarnated into manes after dying in Thanatos, one of the layers of the Abyss.[11]

Ships of chaos were tied together with strands of the spirits of manes.[13] Such ships could also be powered by eating manes.[14]

It was rumored that the mortals who were the most cruel in life before being turned into manes were imprisoned in a place called the Pits of Despair, purported to exist hidden underneath the Mountain of Woe. No sage or wizard had truly seen the Pits however, and it's existence was not truly confirmed .[3] 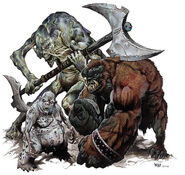 A mane (lower left) next to a bar-lgura and rutterkin, other minor demons.

A concept art depiction of manes from Neverwinter Nights.