Manshaka was a city (a town by Calishite standards)[5][1] in Calimshan, most well-known for its Blood Arenas and slavery. A home for gamblers and smugglers, such was its disrepute that more euphemistic aliases existed for this city than any other in Calimshan.[1] It was the second-largest gambling center in all Faerûn, next to Calimport.[3]

Manshaka was located on the coast south of Calimshan's central plain,[5] on a north–south stretch of shore of the Shining Sea.[3]

The city contained eight sabbans composed of a total of 36 drudachs. It was split into two halves by Drudach Street, which led from the city's only gate to the coast.[3] 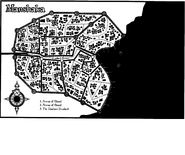 Map of Manshaka
Add a photo to this gallery

The Red Minarets had archers stationed on them, who would often "shoot first and ask questions later" regarding any disturbances in the city below. The external city walls were encrusted with metal and stone shards, making attempts to climb into or out of the city a dangerous task and giving the walls a sparkling effect. The walls also contained a dedicated garrison of soldiers.[3]

The Pasha's Palace occupied the entire northern drudach of the northeastern sabban. It was more heavily fortified than even the syl-pasha's palace in Calimport—both structurally and magically.[3]

For over 50 years, the city was ruled by Pasha Abon Duum, a ruthless despot[1] and crime lord.[8] This was the Ninth Age of Calimshan, a time when Calimshan was a collection of city states more than a unified nation, and so Pasha Duum had ultimate control.[9] When he vanished suddenly in 1357 DR,[1] power nominally rested for a time in Vizar Artouk Fanzir, a businessman and moneylender, who headed a council of twelve prominent citizens, comprising eight other rich businessmen, two formidable magic-users, and a sage. Decisions on important matters were made collectively by the council and Fanzir passed on the results.[8][5] This group mostly only looked out for their own interests and only occasionally for the city's. Their main focus was in maintaining the very profitable Arenas of Blood; they openly encouraged betting on the fights, as these were a primary source of tax revenue.[8]

In less than a year, Ralan el Pesarkhal, an advisor to a sultan under Pasha Duum, had all of the twelve counselors assassinated and rose to power as Sultan of Manshaka.[10]

During the Darkstalker Wars of the next year, Sultan Pesarkhal abandoned Manshaka for Calimport, to become ruler of the entire unified county of Calimshan and beginning its Tenth Age as syl-pasha.[10] He intentionally left no one on the throne, so that he could control the city from Calimport by means of his agents.[1]

In 1370 DR, the city maintained a defensive force of about 700 amlakkar and an additional 200 sadimmin tasked with guarding the two Arenas of Blood.[3] Owning to its position as a port city, it was a rough place.[8] There was very little law in Manshaka,[1] its legal codes were lax,[8] and the guards were little better than slavers or robbers themselves.[3] They were very open to bribery.[8] Offending the wrong person might get someone executed on the spot or thrown into the Arenas as a slave.[1]

Manshaka was a market center for cattle and other kinds of livestock from the ranges of Calimshan,[8] as many in the south found it easier to drive their stock there than to Keltar. While the town of Keltar was better known for its livestock business, in actuality, a greater variety of livestock passed through Manshaka's gates. In addition to common chickens, pigs, sheep, and cattle, Manshaka also dealt in buffalo, camels, deer, and even elephants. These were shipped lived on cargo vessels to other cities along the coast.[5]

Manshaka was an especially busy port in 1357 DR, a common stopping point for sea traders traveling from Memnon to Suldolphor and Teshburl. Surprisingly, they stopped there, not for the livestock (though they did take on meat), but primarily because the city was known as a moneylending center. This in turn attracted merchants requiring capital for a venture, traders needing to make repairs, and adventurers looking for a backer for an expedition. Anyone could be found to fund anything in Manshaka, but rates naturally varied according to risk and trust in the borrower and their skills, ranging from a modest 10% or 15% a year to a massive 100% a month for the riskiest ventures.[5][8]

Most of the humanoid slaves (although not humans or demihumans) coming into Manshaka to fight in the Blood Arenas were imported from the city of Almraiven.[11]

This city, like many in Calimshan, was ancient, being founded in −5980 DR as part of the empire of Coramshan.[7]

The population of the city was nearly annihilated in −943 DR because of a mysterious and magical plague, known as the Cats' Plague, which slew nine out of ten people.[12]

Drow invaded the city in the Year of the Triton's Horn, −697 DR and maintained an influence there for decades.[13][14]

In the Fifth Age of Calimshan, at the end of the Throne Wars, Tasyn el Tarshaj from Manshaka rose to power over all of Calimshan.[15]

After the fall of the Shoon Imperium in 450 DR, Calimshan entered its Seventh Age. Taking advantage of the time of unrest, the mameluks, warrior slaves, rose to power, and from 533 DR to 1018 DR, Manshaka was the new capital of Calimshan. The mameluks abolished slavery and ruled from their palace, the Hall of the Mameluks.[16]

After a rage of dragons ended mameluk rule, the individual cities of Calimshan, including Manshaka, were ruled as separate city states for centuries. In such a time, it was easy for rich and powerful men such as Pasha Abon Duum to wield control by managing information and a system of favors.[9] He would rule for over fifty years[1] a ruthless tyrant[1] and crime lord.[8]

In the late 1340s DR, the con artist Conner and his girl accomplice Vaji came to Manshaka. Finding lax and corruptible law enforcement, they felt safe to attempt grander and more profitable cons than they had in other parts of Calimshan. Unfortunately, Conner approached Abon Duum[8] with a scam in which he claimed that Vaji was the intended bride of Hoar, god of retribution. Impressed by Vaji, Duum initially believed this outlandish tale, but even after he came to doubt it, he still desired her.[17] When Conner's scheme at last went awry, he was forced to sell Vaji as a slave to Duum.[18][19][20] The young Vajra Valmeyjar soon became the most accomplished of Duum's stable of gladiators at the Arena of Blood[18][8] However, after a decade,[20] Vajra escaped from the Arena to freedom, being one of only two slaves to ever successfully do so.[3]

For a brief time of less than a year after his disappearance, Vizar Fanzir and his council of twelve controlled Manshaka from the Hall of Mameluks, but in the Year of Shadows, 1358 DR, Sultan Ralan el Pesarkhal orchestrated their deaths. He drugged their wine, and when they were drunk, an argument started. During this time, he arranged for a brazier to "accidentally" be knocked over. The tapestries caught fire, and the Hall of the Mameluks went up in flames, killing all of the counselors. Sultan el Pesarkhal then took the throne. He had greater ambitions than Manshaka, and within a year, he had taken control of Calimport as well and with it all of Calimshan.[10]

The city saw great destruction in the Year of the Gauntlet, 1369 DR when the Drudach Fires raged through much of the city, slaughtering nearly half of its population[1] and burning many of its notable buildings to the ground.[21]

The largest gladiatorial event in Manshaka's history occurred in the month of Hammer in the Year of the Tankard, 1370 DR. Known as the Great Games, the event saw the deaths of over 3,000 gladiators and 5,000 wild animals and monsters. It also saw the escape of a pack of dire wolves into the crowds of onlookers, when an unidentified spellcaster used magic to dissolve a portion of the walls.[22]

The disappearance of Abon Duum remained an issue of rumor for many years. Some claimed he was murdered by Vajra Valmeyjar, an adventuress and former slave of his. Others believed that something happened when he sought to attain the power of the gods, such that his soul was lost in the planes.[1]

The Arenas of Blood
The source of Manshaka's fame, the Arenas of Blood were two identical structures located on opposite sides of the city, one on the north of Drudach Street and the other on the south side. As of 1370 DR, they held five shows a day each.[3]
Drudach Street
This road cut the city in half and ran from the gate to the port on the Shining Sea.[3]
The Hall of the Mameluks
This was the palace from which the mameluks ruled all of Calimshan during the Seventh Age.[16][10]
The Pasha's Palace
This massive fortress was the size of a drudach and contained a vault of Ralan el Pesarkhal's treasure buried a mile below the surface. It was loaded with magical traps, and el Pesarkhal still had agents lurking there.[3]
The Red Minarets of Manshaka
These blood-colored minarets stood out for their red bricks and were symbolic of the state of oppression felt by the many slaves.[3]

Few mages lived in Manshaka relative to the rest of Calimshan; the majority who lived there frowned on the use of magic.[1]

As elsewhere in Calimshan, many nobles in the city would retire to estates in the southern foothills of the Marching Mountains during the hot summer months, particularly in the vicinity of the headwaters of the River of Ice.[23]

Crime in the city was largely under the control of el Kahmir family.[21] Their headquarters was located in the city.[24]

Retrieved from "https://forgottenrealms.fandom.com/wiki/Manshaka?oldid=621055"
Community content is available under CC-BY-SA unless otherwise noted.