Manshoon (pronounced: /mɑːnˈʃuːn/ man-SHOON[4][8]) was the founder of the Zhentarim,[9] also known as the Black Network, until he was "slain" by Fzoul Chembryl, his ally, and Lord Orgauth in 1370 DR. However, it transpired that Manshoon had created a dozen or more clones that the murderous duo then found themselves facing. Only three of these clones are known to have survived into the late 1370s DR and once more headed the evil organization known as the Zhentarim.[10]

For years Manshoon was the lord of Zhentil Keep and leader of the Zhentarim. Completely fitting the archetype of the sly-tongued, sinister and decadent master spellcaster, Manshoon ruthlessly crushed revolts within his own ranks of the Black Network, easily slaughtered his rivals and weeded the weak out of the ranks of the young and ambitious by sending upstarts on nigh-impossible suicide missions. Hated and mistrusted by Fzoul, Manshoon manipulated him much as he did all others - remaining arrogant, untouchable in his power and faintly amused by it all.[10]

He had contacts with many creatures, mainly beholders, such as Xarlandralath and Xualahuu, some of which held much respect and loyalty to him. For example, Xualahuu was deeply loyal to him and tried to advance the Black Network's plots.[11]

Manshoon was born in Zhentil Keep in 1229 DR[12] to Harlshoon, the first lord of Zhentil Keep. Manshoon, his brother Asmuth and the son of their father's chief rival, Calkontor, named Chess were sent off together to prove themselves worthy of being lords like their fathers. While his sons were away, Harlshoon was poisoned by Calkontor but with his dying breaths he threw Calkontor out of a tower window. The trio's fathers' places were usurped by a pair of opportunists (and blamed on foreign assassins) while the lord-princes continued their adventures together. One such adventure was the quest to take a magical sword from a barrow, a goal shared by a trio of female harpers. Asmuth was blinded and Manshoon had one of his hands blown off when he carelessly grabbed for the sword. Chess saved both their lives and the three fled when the sword animated itself, appearing to attack the harpers. They came across a party of adventurers and murdered them all in their sleep. Manshoon recovered a wand and a spellbook. He traded the wand for his hand to be restored but kept the spellbook, secretly planning to study the Art, inspired by the magic of the sword. After a few more adventures they headed home, learning about their sires and their usurped positions in an inn somewhere in the Dalelands. Manshoon made sure his blind brother Asmuth fell off of a bridge to his death before they returned to the keep where he and Chess planned to dispose of the usurpers. One of them had gone to fight some mages from Thar and had died in the conflict while the other remained in the keep. The two were attacked by Banite priest/assassins upon their arrival but were saved by Manshoon's magic. However, unknown to him, Chess would defect in exchange for his father's seat on the council. It was, however a double cross! Chess, Manshoon and their childhood friend Fzoul Chembryl killed the usurper. They claimed their rightful council seats and supported Fzoul's rise through the ranks of the Banite priesthood.[citation needed]

Feeling exposed, Manshoon immediately set about creating a cabal of mages, his Black Cloaks, to protect him, recruiting Fzoul early on. In 1261 DR, not long afterward, he founded the Zhentarim. Knowing the priests to obey Bane over anyone else and assuming the wizards were just as ambitious as he was, Manshoon held little trust for any of his new allies, he sent out spies and was determined to raise his powers in the arcane far above anyone else in Zhentil Keep. Some of his spies came out from Teshendale talking of a flying hollow rock. Manshoon investigated personally, hoping to find powerful magic. Instead, he discovered the beholder Xantriph. The two canny individuals joined forces, claiming the rock was a conduit to the gods. Banite priests flocked to the place where Xantriph instructed them all to do as Manshoon commanded, joining the Zhentarim and leading them away from the decadent High Imperceptor of the church. However in order to do this Manshoon and his magelings had to pledge fealty to Bane, promising to lead the faith to even greater heights of power than the weakening High Imperceptor had. Furthermore Manshoon promised control of the priesthood and Zhentil Keep to the beholders, or so it seemed.[13]

In secret Manshoon embarked on another plan for his organisation, having little interest in empire-building, he set his Zhentarim wizards the task of establishing trade routes between the Moonsea and the untapped markets of the Sword Coast. This allowed Manshoon to further dream of advancing his skill in the Art while manipulating both the beholders and the church of Bane from behind the scene. During this period Manshoon developed his ultimate insurance plan, the notorious Stasis clone spell.[14]

The Clones and the Manshoon Wars[]

In 1370 DR, Manshoon was "slain" by Fzoul and Lord Orgauth, who then found themselves facing around a dozen clones that the wizard had created. Each of the clones was convinced that he was the real Manshoon and was inexplicably compelled to slay his rival clones. Most of these perished in the ensuing battles. The caches of magical items formerly hidden by Manshoon were scattered throughout the Realms.[10]

Three clones, who mastered this killing compulsion by means of spells and devices, survive with the one that returned to the Zhentarim appearing to be 'the' Manshoon. Used to ruling and manipulating from behind the scenes and relieved of responsibility of administering to the Black Network, he seems to have learned a lesson in caution and patience. He has since redoubled his arcane research, seeking ways to transfer his consciousness from one clone to another at will.[10]

One of the three remaining clones returned to the Zhentarim, conceding leadership to Fzoul and entering into some sort of accommodation with him. The second clone assumed a position of power among the Night Masks of Westgate, calling himself Orbakh. The third took refuge in Undermountain with Halaster.[10]

The Zhentarim Manshoon is a powerful lieutenant of Fzoul. He serves as a member-at-large, a free agent with the power and authority to direct Zhentarim assets as he sees fit, this was strange as the original Manshoon and Fzoul barely tolerated each other.[citation needed]

Orbakh awoke at the beginning of the Manshoon Wars only to find that he had been turned into a vampire and was not in the stasis chamber with the rest of the Manshoon clones (or the stash of magic items he had left for himself in the event of his death). He hunted down the vampire who had turned him, the Night King Orlak, and slew him, taking the vampire lord's magic items and his title of Night King. Whilst venturing up to the surface to feed, he found himself in Westgate where the magic items influenced him to create some vampire underlings and with them, he decided to take over and revitalize the Night Masks thieves' guild. Orbakh quickly took over the Night Masks as he arrived in the midst of a power vacuum left by the death of the guild's former leader. He restructured the guild to his tastes and planned to turn Westgate into the capital city of a vampire kingdom by wedding the last in the line of the defunct Westgate royalty. This plot never saw fruition, however, because of the intervention of the Spellplague.[citation needed]

Although most believe the Manshoon Wars persisted only a few short, chaotic years, they actually waged over the course of at least a century. Where the surviving clones became increasingly entrenched, hoping to outlast their foes.[14]

When Netheril learned of the Zhentarim's alliance with the phaerimm, the shadovar destroyed Zhentil Keep, killing the Zhentarim Manshoon. The one in Undermountain died during the events of the Spellplague itself. Only Orbakh remained. He was now the Night King, leader of the Night Masks and a powerful vampire. The Fire Knives though, purged Westgate of vampires.[citation needed]

Retaking his original name, the last Manshoon clone relocated to the haunted castle, Stormwatch, and rebuilt the forces of the Zhentarim, adding his own undead thralls to those few living Zhents that remained. Stormwatch and Darkhold were the main bases of these forces, but not having the resources to rebuild the organization to its former glory, the Manshoon's new Zhentarim is now merely a mercenary company, bolstered by priests of Cyric from Darkhold.[citation needed]

Decades after collapse of the Weave and the devastating effects of the Spellplague, the vampiric Manshoon began plotting to take rulership of Cormyr. To this end, he slowly began collecting information on items rumored to contain the spirits of the Nine. Known as blueflame ghosts, combining their power was rumored to be strong enough to breach the wards protecting the royal palace of Suzail. He also began to use his powerful mental techniques on lowly and powerful alike, enslaving some, making others mind-thralls to be used or discarded as needed (without the person being any the wiser), and spying on the nobility and palace staff.[15]

Manshoon also began to slowly whittle away at Elminster's defenses, killing an ally of the Old Sage's or removing one of the many contingency spells still tied to him whenever he felt like having some fun. Finally, in the Year of the Ageless One, 1479 DR, he took revenge upon Elminster for the foiling of so many plans and the destruction of so many clones. Manshoon, using the body of a beholder held in mind-thrall, unleashed magics strong enough to reduce Elminster to dust. He departed, however, before discovering that Elminster survived as a pile of magical ash.[15]

Manshoon continued to plot his overthrow of the Obarskyrs. He followed Elminster to the Simbul's cave in Shadowdale with the intent of killing Elminster. However, Elminster and Storm Silverhand were able to restore the Simbul's sanity, and she forced Manshoon to yield and promise to work with Elminster to recover Blueflame items. After the Simbul teleported away, Manshoon once again blasted Elminster's human form to ashes but couldn't destroy him.[16] Later, after Mystra's return around 1480 DR, Elminster regained his original body and destroyed for good the vampire Manshoon. However, Elminster knew that Manshoon was ready to awaken a new clone.[17]

In 1487 DR, although intending to continue where his former clone left off, the new Manshoon continuously found himself thwarted, from even attempting to begin his schemes, by the newly returned Mirt the Moneylender, the two of them continuously meeting for drinks and passive-aggressive conversations in Suzail.[18]

In 1488 DR, Manshoon, now no longer interested in direct confrontations with the Sage of Shadowdale, was caught alongside several other archwizards inside a spellstorm in Cormyr for the purpose of making a bid for the mythical Lost Spell. However, aside from an "alliance" made with Malchor Harpell (at the indirect request of Elminster and Mystra), Manshoon eventually left empty-handed.[19]

A miniature of Manshoon casting a spell. 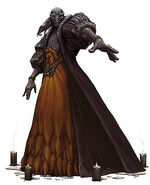 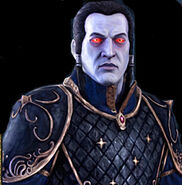