A manticore was a large, magical beast with the body of a lion, dragon-like wings, and a somewhat humanoid head. Its long tail had a cluster of deadly spikes, which the creature could launch at its foes as weapons. It had incredibly tough claws and fangs.[1]

Manticores were true monsters. They were giant beasts with the bodies of lions, the wings of a dragon, the head of a man, and a tail that ended in a mass of deadly spikes.[1] The coloration of these various body parts was similar to that of their base creature.[5]

The mouth of a manticore was full of rows and rows of razor-sharp teeth, similar to that of a great white shark. It used these teeth to feed upon any creature the manticore could catch, be it animal or human.[1]

Manticores were known to be savage man-eaters and allies of evil creatures. Manticores were intelligent creatures and often worked beside other evil beings to bring strife and suffering to the world.[1]

Some manticores had tail spikes that carried lethal or paralytic venom. Often, these manticores would have tails that were similar in appearance to that of a scorpion's stinger.[1]

In the Year of the Groaning Cart, 1267 DR, manticores, along with harpies and perytons, destroyed the city of Lis in the Moonsea region in what was known as the Flying Plague.[6]

Manticores were carnivorous creatures. Though they happy settled for the flesh of most any creature, they preferred the flesh of humans most of all.[7][5]

Manticores were typically known to make their lairs underground or within caves, particularly ones that other races would consider to be very dismal.[5]

These creatures could be found in almost any climate.[5] However, they far preferred to live in warm habitats.[3][5]

In Northwest Faerûn, they could be found within the Delimbiyr Vale.[8]

In West Faerûn, they could be found within the land of High Moor.[9]

Manticore hide was valued among some creatures for its use in furniture, such as chairs.[10]

A unique enchanted cloak, the Skin of the Manticore was created out of the beast's hide with the tail still attached. The enchantments placed on it allowed the wearer to control the venomous spiked tail of the cloak.[11]

A depiction of a manticore from Adventures in the Forgotten Realms 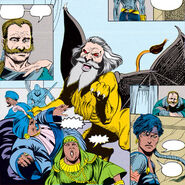 An illusory manticore attacks Abon Duum and spectators in the Arena of Blood.

A Manticore guarding a treasure hoard.

An adventurer wearing a backpack and carrying a torch faces down a manticore on the Dungeon Level of Undermountain. 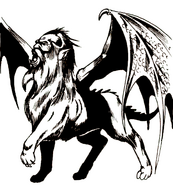 A manticore from 2nd edition.