Marid (Arab)
Marids (pronounced: /mɑːˈrɪdz/ ma-RIDZ[8], sometimes pluralized as "marid"[9]) were powerful genies native to the Elemental Plane of Water.[3] They were also prevalent throughout Zakhara, the Land of Fate.[4]

Most Zakharans revered marids as the most wondrous and powerful of all geniekind.[4]

The average marid stood a towering sixteen[3] to eighteen feet[4] (five and a half meters) tall, looking down upon all other genies. Marids were beautiful genies whose skin matched all of the hues of the vast ocean.[4] While usually blue,[3] in fact, marids changed their skin color to reflect their current mood, with darkest shades of blue indicating anger.[4] Most marids had blue-black or dark gray hair, though white-haired marids did exist. Generally speaking, the white-haired marids were the most turbulent of their kind.[4]

While on the Elemental Plane of Water, or in seas or oceans, marids usually wore scant clothing or went bare.[3] On land they preferred colorful flowing robes or large pantaloons.[4] Others would wear clothing made from finely woven seaweed inlaid with coral or pearls.[3] Both males and females enjoyed showing off their impressive physiques, so flimsy vests were usually the most clothing they wore to cover their torsos.[4] Regardless of the style of clothing worn, it was certain to never impede swimming.[3]

Marids could communicate with telepathy like all true genies.[7] They spoke Aquan, the language of their native plane,[6] but they were also fluent in Jannti, the common tongue of all genies, and Midani, the native language of Zakhara.[4] When angered, a marid's native language resembled the sound of a clashing storm at sea or waves crashing against a rocky shore.[4]

Besides immense physical strength[3]—they could stop a ship as long as 110 feet (34 meters) in length[3]—marids were wondrously magical creatures, matching archwizards in terms of spellcasting ability. They could use the following spell-like abilities whenever they wanted to: create water, detect evil, detect good, detect invisible, detect magic, invisibility, polymorph self, and purify water.[4][3] They had more limited powers to assume liquid form,[4] by taking the form of a vortex,[3] or to assume gaseous form.[3] They could create a wall of fog,[3] and were said to be able to lower water and part water.[4] Once every year they could alter reality[4][3] but only as a gift to non-genies.[3]

Any water-based magic was utterly useless against a marid.[4] Some scholars believed that they were also partially resistant to cold-based spells, yet fire-based magic was their weakness, being particularly vulnerable to attacks with open flames.[4] Others, on the contrary, had observed no such weaknesses to fire. In fact, a marid's very touch was said to extinguish any flame. Instead, they argued that marids were strongly resistant to magic of any variety.[3]

Marids could travel between any of the Elemental, Prime and Astral planes at will, though not to a specific location, and could carry others along with them.[7] They could also move freely upon the Ethereal Plane. Due to their strained relationships with the other genies, they rarely visited the other Elemental planes.[4]

Marids were a vehemently independent and proud people.[10][3] Every marid believed that she or he deserved to be the padishah![10] They tended to shift moods rapidly, as quickly as a storm upon the sea. Like all genies, they were curious about life on the Material Plane,[7] but they typically had the least impact on that plane of all the other genies, because they considered everyone else beneath their notice.[9]

Marids enjoyed flattery even more than other genies. When addressing a marid, a human was expected to use a honorific, such as, "Endless Wave Upon the Sea of Fate," followed by a long and wordy ode to the marid's greatness.[11] Because of their chaotic nature, marids were considered dangerous to imprison or bind or to demand wishes from. They were quick to seek revenge.[12]

Marids enjoyed hunting within the oceans for sport.[3] Because of their elevated self-worth, all marids collected wealth in many forms, even if they were not actual nobles.[4] These collected items were often pearls or other treasures from the sea floor,[3] but some even kidnapped skilled human or demihuman craftsmen so they could work on their homes or produce artistic creations. These kidnappings did violate marid law, so they kept their "borrowed" workers a secret to avoid the wrath of the true noble marids.[4] More malicious marids would intentionally capsize vessels on the Material Plane to drown sailors.[3]

Marids treated all other races, including other genies, as inferiors. They tolerated the djinn and jann but openly despised the dao and efreet. Humans as a species were tolerated as well, but were considered the most disgusting species with whom the marids had dealings. Powerful human sha'irs and leaders like the Grand Caliph gained the respect of the marids if it was deserved.[4] Even so, a marid was far more likely to treat a human visitor to the Plane of Water favorably than most other elementals or outsiders would.[6]

While not generally altruistic, they loathed evil creatures of the Plane of Water and often waged war against them. Though they were the most powerful of all genies,[5] their hesitancy to rally under a single leader limited their effectiveness at such wars.[10]

These mighty genies were sea creatures, but could breathe on land with ease.[4] Their bodies were formed from elemental water.[5]

Marids did not need to consume food or beverages in order to survive, though many did so because it pleased them.[4] Some marids built fishing outposts near seaweed and coral balls, which floated through the Plane of Water, because the balls attracted many fish varieties.[10] They were quite sensitive to flavors. Many kept censers within their homes to release exotic salts, infusing the water with pleasing flavors.[4]

Because of their strong sense of freedom and individualism, there was not a true "marid empire". Marids living on the Plane of Water were citizens of a wide group of mostly independent stronghold communities. These communities swore fealty to the padishah, but more often than not, this was in name only.[10][13]

Officially, however, the seat of power for the marid community was the Citadel of Ten Thousand Pearls.[4][10] This majestic location was ruled by the great Padishah of the Marids, who was Kalbari al-Durrat al-Amwaj ibn Jari in 1367 DR[note 1]. In addition to being the capital, the Citadel was also the home of many noble marids.[4]

Every individual marid claimed to be noble,[4][9][10] creating a confusing hierarchy of titles and honorifics that was not officially recognized by true noble marids[4]—such titles as "atabeg", "mufti", or "shah".[10] Other titles marids used for themselves included "beglerbeg" and "khedive".[14] Though powerful in their own right, common marids claiming to be noble paled in comparison to the legendary power of the true noble marids.[4]

Marid households on the Elemental Plane of Water usually had two to twenty members[4][10] led by a marid with a title. These strongholds were often anchored to some sort of solid mass.[10] Servants and slaves worked within a marid household,[4] often including jann and other water creatures.[10] Marids enjoyed using air-breathers as servants because the marid's gift of water-breathing to the servant insured their compliance.[4]

Because of their free-spirited attitude, marids often visited Zakhara for adventure. The sites for these forays were usually inaccessible to mortals, such as the Great Sea in the midst of a violent hurricane.[4] They often accessed the Material Plane through elemental vortices on the Plane of Water, and for this reason, their settlements were usually located by such interplanar portals.[6]

Since marids had such high opinions of themselves, a view that was only slightly less than reality because of their immense power, mortals who dealt with them often found that bribery and flattery were the wisest methods to deploy, though this did not guarantee the expected outcome.[4]

Marids were fond of embellishing nearly anything. They were creative liars, but not in a malicious sense. As one would suspect, they were fabulous storytellers, making it difficult to keep a marid from straying off-topic during conversation. It should be noted that interrupting a marid was a crime for lesser creatures (any non-marid) as far as they were concerned. Offending a marid was a sure way to incur their terrifying wrath.[4]

Marid society did not have much in terms of production. They gathered what they needed from the sea and rarely traded with others, though they would offer coral or pearls as gifts to foreigners.[15]

Marids were not a very religious people. Among the gods they sometimes worshiped were Ahto, Blibdoolpoolp, Jisan, Manankharlar, and Tefnut.[16]

Like most genies, marids saw battle as a puzzle to solve and enjoyed using their powerful abilities to take advantage of their foes' weaknesses.[7] Naturally, they strongly preferred to battle underwater. When in water, a single marid could easily capsize a ship and create a vortex to entrap any foe trying to swim to safety.[3]

A typical war party included a single noble marid and as many as 50 common marid warriors, perhaps accompanied by a dozen other creatures from the Plane of Water.[9]

Marids sometimes warred against other genies just to remind them of their power.[9] 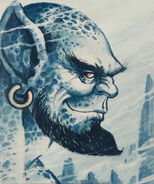 A smarmy-looking marid from the AD&D Trading Cards.