The marsh was bordered on the north by the Greypeak Mountains and on the east by the Greycloak Hills. Several tributaries of the Winding Water were either sourced or fed from this marsh.[5]

The Marsh of Chelimber was home to numerous lizardfolk, bullywugs, and sivs.[1]

The Marsh of Chelimber used to be home to an entire human kingdom. When the kingdom was drowned, its people became undead soldiers. Lizardfolk began to inhabit the marshlands and became masters of the undead. The various temples within the marsh housed minotaurs, allies of the lizardfolk who guarded the pathway to the Betrayer with the aid of bulettes.[2]

In 993 DR, this land was the Principality of the Snarling Boar, the demesne of Prince Chelimber. A wizard known only as the Wizard of the Crag had recently raised a tower in his land. Chelimber tried ousting the wizard with swords, but the wizard turned his men to stone and sent fireballs into the Prince's keep. Chelimber then hired a wizard of his own, Taskor the Terrible. On Midsummer's Eve, the wizards matched their Art. Both wizards vanished from the Realms, and were not seen again. The crag upon which the enigmatic wizard built his keep was shattered, and the water elementals he kept were loosed. Their depredations subsequently flooded the land and slew the prince himself.[7][8][9]

After being chased into the marsh, Eldrith the Betrayer united the lizardfolk of the marsh under her rule. She then built the Onyx Tower in the middle of the marsh. When Eldrith was killed, the tower fell and the marsh was put under vampiric rule. The vampires rebuilt the Onyx Tower only to have it fall again with the death of the vampire lord, Mordoc SeLanmere. However, the death of the Betrayer also resulted in some catastrophic changes in the marshes.[2]

The marsh was given to the Zhentarim by the treacherous lizardfolk. While some villages sprouted at the north of the marshlands, these were either destroyed by the monsters or put under Zhent rule, who controlled the marsh with a cruel hand.[2]

By 1479 DR, the Marsh of Chelimber lay within the domain of Najara, a realm of naga, yuan-ti, and lizardfolk.[10]

The Marsh of Chelimber housed many ruins in it. Many of them originally belonged to Prince Chelimber:

The Onyx Tower was a huge tower that housed the soul of Eldrith the Betrayer, which would fall when she died. The Onyx Tower vanished forever from the marsh at her death,[11] and reappeared briefly when Mordoc SeLanmere brought it back. However, it was quickly moved to the city of Baldur's Gate.[2] 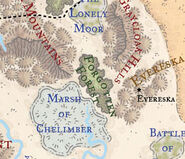