Lord of Shadows[1]
Master of All Thieves[1]
The Shadowlord[2]
God of Thieves[3]
Blackheart[4]
Derogatory: Shadowflea[3]
Shadowcrab[5]

listen), the Lord of Shadows, was the intermediate god of shadows, thievery, and formerly intrigue in the Faerûnian pantheon, a loner god most often associated with those of ill-repute. He was a chaotic neutral or neutral evil deity who made his home in Shadow Keep on the Plane of Shadow. Mask's symbol was a black mask made of velvet, tainted with red.[10]

Avatars of Mask within his temples usually appeared as slightly built human males wearing soft gray leather armor, a black cloak, and a black mask tinged with red (believed by scholars to be his true or chosen form). He might also manifest as a soft-spoken human female with pale, glowing skin, dark, floor-length hair, and starry white lights for eyes. This form always walked barefoot and was constantly shrouded in a shadow-like gloom. In public however, Mask's form was entirely inconsistent, appearing as members of all races, genders, ages, builds, and capabilities. No matter his form however, his movements made no sound and left no trail.[10]

Known for his constant scheming, cool head, and oft-reserved biting comment, Mask lost a significant portion of his power, the intrigue portfolio, to Cyric. This, of course, led to two things: an enduring hatred of Cyric, and the Lord of Shadows leading himself to be more direct than he was in his prior, elaborate plots.[citation needed]

The Shadowlord wielded a pair of magical, twin longswords known as Stealthwhisper and Shadowblade.[17]

Mask kept a divine realm called Shadow Keep on Niflheim, the second layer of Hades. Visitors might glimpse the Keep, but only very few ever reached it, as it was constantly shrouded in a heavy fog that led them astray.[10][18][19]

Simply put, Mask was a loner. However, before this, he had frequent alliances with Bane. If nothing else, their sizable hatred of Cyric gave them common ground in addition to their history of working together. Mask was also at direct odds with Waukeen, the goddess of merchants and honest trade. All guardians of light, knowledge, and duty were opposed to him. This included Selûne, whose light tended to reveal his own faithful whilst they worked.[citation needed]

He was allied with the drow god of thievery Vhaeraun.[21] The relationship itself was businesslike.[22] However, Mask planned to compensate what he lost to Cyric with Vhaeraun's divinity,[23] while Vhaeraun used the similarity between their symbols to recruit half-elves and humans into his church.[24] The two were often confused with one another among non-drow on the surface.[25] They also shared one very similar title, Mask's "Lord of Shadows"[26] and Vhaeraun's "Lord of Shadow".[27]

The church of Mask stated that wealth rightfully belonged to those who could acquire it. Honesty was for fools but apparent honesty was a very valuable thing, and subtlety was everything.[28]

The Clergy of Mask were called Maskarrans, with elite specialty priests referred to as demarchesses (pronounced: /dɛmɑːrˈkɛsɛs/ deh-mar-KESS-es) if female, and demarchs (pronounced: /dɛˈmɑːrks/ deh-MARKS) if male.[28] Maskarrans addressed each other as "Brother/Sister Shadow", no matter their rank. Clergy that completed an especially dangerous heist or complex act of manipulation were often admitted to the Circle of the Gray Ribbon.[28]

It was rumored that the Cult of Mask maintained a large network of informants throughout the cities of the realm. It was also rumored that this network provided employment for all sorts of thieves, beggars and thugs.[citation needed]

Shrines of gods radiated that part of their philosophical orientation they shared the most. For example, a shrine of a chaotic evil deity, who was more chaotic than evil, radiated chaos. Mask's shrines during the 14th century DR radiated chaos,[29] despite him being a neutral evil deity during that time.[26]

Mask's faithful were led to believe that the god saw everything that happens in the dark and to trust it, as one would be made an easy target by walking into plain light. The abilities to deceive, as truth was a foolish virtue and manipulation was better than brute force, and to be dextrous were also appreciated. Whilst the faith advocated for accumulating riches, it also said to only steal what was necessary. They also believed that owning something simply required being in possession of it.[8]

During the Time of Troubles of 1358 DR, Mask took the shape of a powerful blade called Godsbane. He eventually came to be wielded by the then-mortal Cyric; he acquired the sword by murdering a halfling named Sneakabout, who in turn killed the former wielder of the sword.[citation needed]

In the years following the Time of Troubles, Mask released the powerful hound Kezef to try and kill Cyric, but the hound turned instead on the Lord of Shadows, not stopping the chase until it had bitten off one of the god's limbs. Mask, seemingly too weak to heal, acquired the powerful weapon Houndsbane to defend himself; the weapon was a gift from the deity of magic, Mystra.[citation needed]

In 1374 DR, Mask relinquished his divinity and his life over to Shar to repay a millennia-old debt to the goddess, who was revealed to be his "mother" as well as the person he served as a herald. Just before his death, Shar revealed Mask's true name as Lessinor, though its origin (either as a mortal name or a birth name) was not explained. A portion of Mask's divinity—the portion stolen by Kesson Rel—was absorbed in equal portions by Erevis Cale, Drasek Riven, and Prince Rivalen of the Shade enclave. Erevis then sacrificed himself to Mephistopheles, the archdevil Lord of Cania, in payment for releasing the half of the soul of Magadon that he ate; Mephistopheles in turn absorbed the portion of Mask's divinity held by Cale.[citation needed]

There were several hints that Mask could return, either in person or via a successor who took his place in the pantheon, namely:[speculation]

This was proven to be true when the Shadowlord's plans to thwart the Cycle of Night perpetuated by Shar on countless worlds resulted in Mask's divinity (both the Shar-consumed and Kesson Rel portions) being gathered back into a single being—Drasek Riven, Mask's former Second of Five—resulting in the aforementioned cycle being thwarted, along with the stripping of divinities from both Mephistophales and Rivalen Tanthul.[31] 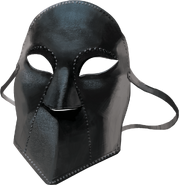 Another depiction of the holy symbol of Mask.