A maul (or mall) was a heavy, long-handled hammer used for splitting a piece of wood along its grain, or as a two-handed, martial, melee weapon.[citation needed]

One side of it a maul was similar to a warhammer, the other side similar to an axe. A typical maul built for wood splitting would have an overall length comparable to a greataxe.[2]

Mauls had wedge-shaped heads and a cutting side resembling an axe, though with a thicker, blunter blade. For splitting wood, this tool was considered much better than a typical axe. Their weight was more advantageous and due to their width, it was difficult for them to become stuck in the wood. When used in combat, this heavy weapon was wielded in two hands.[2]

Mauls were known to be favored by dwarves.[2] 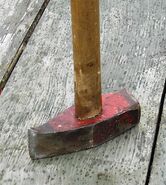 Retrieved from "https://forgottenrealms.fandom.com/wiki/Maul?oldid=557862"
Community content is available under CC-BY-SA unless otherwise noted.