Start a Wiki
This article is about the city. For the efreeti, see Memnon (efreeti).

Memnon, a key port of trade for Calimshan,[6] was the former capital of the efreeti kingdom of Memnonnar[9] and the birthplace of the infamous assassin Artemis Entreri.[11]

Memnon was situated on the northern border of the Calim Desert, at the mouth of the River Agis, and along the Trade Way.[citation needed]

While the official ruler of the city in 1370 DR was Sultan Arin yn Kahar el Sujil, the real power was in the hands of his vizar, Anders el Gnurlbrach.[1] Despite being a half-orc, since at least 1357 DR, Anders was very popular both with the general populace of Memnon and with the syl-pasha of Calimshan. This was in part because he established an elected city council.[5]

Memnon served as the northernmost naval base for the Qysanallojal, Calimshan's navy. The ships docked here were the smallest and fastest in the fleet, designed for scouting and anti-piracy purposes. In 1357 DR, the navy was growing so quickly, that fishermen were being forced to find new docks.[5]

Memnon was a key trade city for Calimshan. It was that kingdom's northernmost port, and nearly all caravanners on the Trade Way stopped there for at least a day regardless of whether they were traveling north or south, as Memnon was on the edge of the Calim Desert. The city thus served the function of a massive caravanserai, offering inns, stables, repairs, supplies, or entertainment to those having just survived the trek across the desert or to those about to make it.[5]

Additionally, Memnon was considered a fishing town, producing both high quantity and high quality of fish, shrimp, and shellfish of many varieties.[5].

In the late 1340s DR, Conner and Vaji ran confidence tricks in all the major cities of Calimshan, including Memnon, before they went on to Manshaka.[12]

In the Year of the Prince, 1357 DR, Vajra, Conner, and Salabak sailed back into Memnon on the trail of the mage Chancil Crystalheart. However, his thugs and apprentices waylaid them with a wand of telekinesis, hurling them high into the air. Fortunately their fall was broken by an orange seller's stall, and they were surrounded by eager-to-help beggars, which Salabak drove off with the illusion of a squealer. They followed Chancil's apprentice to his home, where they attempted to rescue the kidnapped cat child.[13]

Memnon was claimed to have the best organized beggar's guild in Faerûn, with very strict rates. They would charge for any service, even helping someone up if they'd fallen, and just to spit-polish a sword was 10 copper pieces.[14]

Prior to the genasi uprising, the general populace seemed to exclusively worship Selûne.[15]

The Theater of All Faiths
An ancient theater now used as a temple.
The Golden Grove
A druid's grove dedicated to Silvanus.
The Protectors' House
A temple to Selûne, Shaundakul, Valkur, and Ibrandul.
The Fine Gold Chain
An adventurers' club.
The Brazen Behir
A popular inn.
The Black Flagon
A classic tavern.
Tulbusker's Safe Haven
Another, cheaper inn.
Khanduq of the Coinmother
A large khanduq in the city.[16]

Chancil Crystalheart was a notable criminal mage who lived in a palatial home in Memnon.[13] 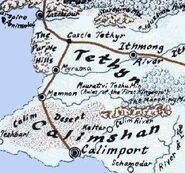 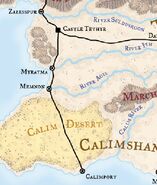 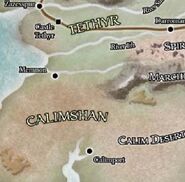 4e Map
Add a photo to this gallery

Retrieved from "https://forgottenrealms.fandom.com/wiki/Memnon?oldid=521298"
Community content is available under CC-BY-SA unless otherwise noted.