Menzoberranzan (game) is a Featured Source! It is one of the best documented and most complete sources on the Forgotten Realms Wiki.
However, if you can update it or further improve it, then please feel free to contribute.
This article is about the computer game. For other uses, see Menzoberranzan (disambiguation).

386/40 MHz IBM DX CPU, 4 MB RAM, 15 MB HDD, VGA/SVGA GPU
Menzoberranzan is a computer game developed by DreamForge Intertainment and published by Strategic Simulations in 1994. It is based on the Advanced Dungeons and Dragons 2nd edition system and is the first video game to star Drizzt Do'Urden.
“
FORGOTTEN REALMS®: MENZOBERRANZAN™ is a CD-ROM computer roleplaying adventure based on the popular AD&D® 2nd Edition games rules and characters found in the New York Times best-selling book The Legacy, by R.A. Salvatore. The game invites your characters to explore the world of Drizzt Do'Urden, the most famous of the dark elves. Venture into the Underdark to take on the challenges of Drizzt's homeland. Visit Menzoberranzan, the city of Drizzt's birth, and fight to free captured villagers from their evil, drow captors. With the power of CD-ROM, the land of the drow comes alive. Drizzt speaks, as do over thirty NPCs and opponents, all brought to life by voice actors with the terror of Lolth, the Spider Queen, pounding in their veins. Rich cinematics take your characters from the plains of Icewind Dale to the dark and dangerous passageways of the Underdark, then on to Menzoberranzan where all the power and magic of the drow await.
”

Menzoberranzan is a first-person role-playing game, similar in style to Eye of the Beholder, Ultima Underworld, and Might and Magic. The game uses the same engine that was used for Ravenloft: Strahd's Possession.

The player starts with two heroes in a small village, which is under attack by evil drow. They follow them into the Underdark to the mighty drow city of Menzoberranzan. Along the way, they encounter companions of varying races, and fight off foes from gnolls to yochlols.

to serve their Spider Queen.

The world below is the Underdark—
a blinding darkness to behold.

If you dare upon the drow elves' lair,
their dark hearts and swords will fly.


for you alas, are simply bait.
”
— Introductory note

A group of local adventurers from a village in Icewind Dale set out to slay a monstrous beast. During the battle, a member of the party thrusts a spear into its neck. Despite injuring the creature, the spear-fighter is torn from the ground, and eaten alive. As the battle continues, the party's magic-user casts a mighty spell at the many-legged creature. The foe is slain, and the two remaining heroes return to the village to the greetings and cheers of the locals. But as the festivities carry on late into the night, the village is raided by a drow party. The drow invasion force capture a group of villagers and escape with them, and the heroes are charged with a quest to retrieve them.

As the heroes take their first steps out of the village tavern to aid in the defense against the remaining drow, they also have to put out a fire started in the village store. When the invaders have been repelled, and the fire put out, the heroes are given a special helmet by the village's innkeeper as a reward.

The two heroes venture out into the plains of Icewind Dale, and they encounter gnolls, drow, verbeeg and other monsters. As they move around the plains, they find the house of the wise old druid Vermulean, who knows a lot about the world and its wonders. He tells the heroes that to venture into the Underdark, they will need protective stones so that the radiation doesn't harm them and to allow them to see as an underground dweller would. This leads the heroes to quest for the gems all over the plains. Their hunt leads them to meet Drizzt Do'Urden in a mountain pass, where he saves them from fighting a giant and offers to join up with the heroes.

Further away in the plains, the heroes meet the kenku Vonar, a friend to Drizzt, who had his wing wounded by the drow who invaded the village. He also offers to join the party. After gathering all the gems, they take them to the old wise man who transforms the gems, so that the heroes may venture into the Underdark.

See Helm of Spiders for the full plot involving the drow artifact.

Although they do not know it, the gem and helmet they received are actually parts of the legendary Helm of Spiders, an ancient and powerful drow artifact. The party ventures deeper into the Underdark, finding friends and foes along the way, some of which join the adventurers. They travel through dwarven mines, the Temple of Dumathoin, and caverns of myconids, galeb duhr and driders. On their journey, they find out much about the treachery of the dark elves, and eventually reach their infamous city of Menzoberranzan.

Here, they find themselves amid raging wars between drow houses, all vying for the ancient Helm of Spiders. After the heroes recover the last part of the ancient artifact, the adventurers use it to rescue the prisoners. Drizzt leads them out of the Underdark, and all the villagers are united again. 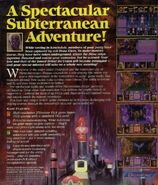 From the Menzoberranzan manual: