The Mere of Dead Men (or Merdelain, meaning "Slow Marching Court" in Elvish[1]) was a swampy area located along the Sword Coast North.[3]

The name "Mere of Dead Men" referred to the thousands of dwarves, elves, and humans of the Fallen Kingdom who were slain here during the invasion of an orc army.[3][6]

The Mere was located along the Sword Coast on the Sea of Swords between Neverwinter and Waterdeep. The High Road skirted its eastern edges on its way through the foothills of the Sword Mountains to the east.[9] The nearest significant settlement was Leilon to the north.[10]

The Mere of Dead Men was a cold saltwater swamp roughly 100 miles (160 km) long by 30 miles (48 km) wide along the shore. It was a desolate place full of monsters and few members of the civilized races. The swamp constantly grew over time, swallowing homes and property located close to its boundaries.[6] It was believed that the eastern boundary of the Mere was magically bound to the High Road (perhaps via a wish spell from the Mere's creator), since attempts to reroute the road were futile and only caused the expansion of the swamp.[7]

The Mere itself was full of trees, vines, quicksand, and hidden islands, and it was generally covered in fog, making visibility very poor. The bones of fallen creatures were clearly visible throughout the Mere. The water was deep enough that it could be navigated on a flat-bottomed boat, but the dark water and hidden obstructions made that choice dangerous.[7]

Inside the Mere were the flooded ruins of a number of castles and settlements. Many of the castles had strange wards that would either strengthen certain magic or negate it.[6]

The Mere was created in 615 DR. After the armies of Phalorm were overrun by the Horde of the Wastes in 614 DR, the few that had rallied made their stand at Iniarv's Tower, a tower that had once belonged to Iniarv, the former Mage Royal of Uthtower. Unbeknownst to all, Iniarv had retreated into the tower's crypts to become a lich. He was awakened by the orcs and enraged by the commotion. King Uth VII begged him for help, calling upon Iniarv's ancient alliance with Uthtower. Iniarv acquiesced, calling on the ocean to flood the entire area, killing all goblinoids and humanoids alike. When the waters receded, all that was left was a saltwater swamp. The land was never permanently resettled, although there were a few attempts that were thwarted by the wetlands and strange monsters released by Iniarv.[7]

In 631 DR, the dragon Chardansearavitriol (called Ebondeath) laid claim to the area, making his home in Uthtower and ruling all surroundings.[11] He disappeared in 922 DR, becoming a dracolich at the behest of Strongor Bonebag, a priest of Myrkul.[12][7] The Ebondeath Sect of the Cult of the Dragon began worshiping him at a mausoleum created at the Uthtower.[7]

Trolls surviving the Trollwars against Waterdeep (932 DR – 952 DR) found refuge in the Mere of Dead Men. There they were met by Aviss and Fellandar. The trolls believed the traitors could bring them victory in a third, and final, Trollwar, and promised them power over the city. Aviss and Fellandar chose to give up their humanity and swore a bond between them. As the trolls watched on, Aviss and Fellandar entered a certain pool where the fell magic of the Mere transformed them into inhuman creatures of raw and primal power. Empowered, the pair led a new troll army out of the Mere and south toward Waterdeep in the Year of the Thundering Horde, 963 DR, but the attack was ultimately thwarted.[2]

In 1202 DR, under the Eye of Myrkul, Ebondeath's body disintegrated into dust, due to the god Myrkul's influence, although his spirit was still tethered to his remains. Worshipers from the Ebondeath Sect traveled to the Mere of Dead Men to see the remains and the sect grew.[7][13] However, the Ebondeath Sect collapsed around 300 years later in 1358 DR when Myrkul was destroyed.[14][15] Sect members' powerful rings of Myrkul were lost to the swamp monsters.[7]

Rise of the undead[edit | edit source]

When Myrkul's avatar was destroyed over the Sea of Swords, fragments of his bone dust were carried north and entered the waters of the Mere. This dust animated some of the drowned corpses of the orcs and people of Uthtower into a variety of lesser undead creatures. They displaced many of the living residents of the swamp, though the undead lacked any kind of direction, having no greater undead or necromancer to lead them.[7]

As the undead began to make an appearance, members of the Cult of the Dragon cell in Leilon began searching for the mausoleum.[7]

The Cult of the Dragon cell of Leilon requested the aid of Voaraghamanthar, a black dragon who had moved into the Mere, in their search for the mausoleum. He aided them in return for treasure, including the Twinned Crown of Yarlith (created by Iniarv and discovered in the Mere). Voaraghamanthar had moved into the Mere seeking to find the treasure rumored to be there, both the hoard of Chardansearavitriol and the wealth of ruined Uthtower and Yarlith. However, unbeknownst to the Cult and locals, Voaraghamanthar had a twin brother named Waervaerendor; the two dragons posed as the same dragon to prevent discovery. The two dragons were in reality not interested in the lichdom the cultists extolled, but they nonetheless used the alliance to their benefit. The two dragons also approached adventurers to find the treasure that they sought, including the Twinned Crown of Uthtower.[7]

A variety of creatures were found in the Mere, including bullywugs and lizardfolk;[5] sivs;[8] aballins, behirs, flying fangs, giant frogs and giant toads, gibbering mouthers, giant leeches, hydras, meazels, monitor lizards, nyths, scrags, shambling mounds, snakes, and will-o'-wisps.[7] A pair of black dragons (known as a single dragon, Voaraghamanthar) made their homes in the swamp.[7] Doppelgangers dwelt in some of the ruined settlements, posing as humans in order to lure unsuspecting travelers to their doom.[6] Trolls also once lived in the Mere.[2]

After the Time of Troubles and the death of Myrkul (1358 DR), the taint of the dead god infected the remains of the dead in the Mere, causing them to turn into undead ghouls, skeletons, and zombies that attacked travelers on sight.[7]

Legends spoke of liches, a penanggalan, sea zombies, darktentacles, yuan-ti slavers, and other monsters, but their presence was not confirmed.[7] 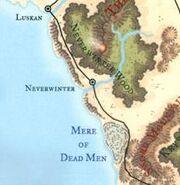 The location of the Mere, south of Neverwinter.

Screenshot of the Mere in Neverwinter Nights 2.

Map showing flooded towers, keeps, and mansions, circa 1370 DR.
Add a photo to this gallery

Retrieved from "https://forgottenrealms.fandom.com/wiki/Mere_of_Dead_Men?oldid=592190"
Community content is available under CC-BY-SA unless otherwise noted.