After the Year of Wild Magic, 1372 DR, on casting the meteor swarm spell, four meteors each some 2 feet (0.6 meters) wide were launched from the caster's hand. They flew in straight lines to their targets, leaving trails of fiery sparks behind them. The target could be a location or a creature, and more than one meteor could be launched at a target. If the meteor hit, the target was pelted by the stone and could not resist the explosion. But even if the meteor missed, it exploded close in their vicinity. In either case, the meteor exploded like a fireball, producing flames over a 80-foot-wide (24-meter-wide) area. It had a range of over 400 feet (120 meters).[4]

The spell required only somatic and verbal components. The caster was required to stretch out their hand to launch the meteors.[4]

The spell was attributed to Netherese arcanist Mavin in −475 DR and was originally called Mavin's meteors.[1]

As far as any spell of such power could be called common, meteor swarm was commonly known and used by the magical community by 1358 DR.[9]

During the Time of Troubles in the Year of Shadows, 1358 DR, outside the House of the Moon temple in Waterdeep, the avatar of Shar hurled a meteor swarm of six meteors at Naneatha Suaril, high priestess of Selûne, to punish and kill her for turning against her. However, Naneatha somehow diverted the spell, but not before both were knocked unconscious by the blasts of meteors.[10] 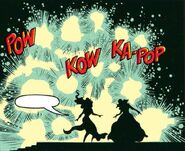 ...but both suffer the effects.