Fiend Folio 1st edition[5]
Mezzoloths (pronounced: /ˈmɛtzoʊloʊθz/ METZ-oh-lothz[6]), sometimes called mezzodaemons[5] or mezzodemons,[2] were both the most common and lowest-ranking yugoloths.[4] They acted as the wretched grunts in the mercenary legions of the daemons, compensating for their low intelligence with fearsome combat skills.[4]
“
You can hire me for 500 gold. You can trust me for 10,000 more.
”
— Joukaschaggi, a mezzoloth sellsword[7]

Mezzoloths appeared as humanoid insects, standing 7 feet (2.1 meters) tall and weighing 250 pounds (113.3 kilograms).[3] They had six lanky limbs, four of which were arms ending in hands tipped with talons.[4][5] Their entire bodies were covered in dense plates of ivory-colored chitin and their broad skulls were notably armored.[1][4] When angered, their wide-set, unblinking eyes glared red, a state they were nearly always in.[3] Despite their claws, mezzoloths almost always carried a shield and trident, or two tridents alone, into battle.[1][4]

Mezzoloths were simplistic beings driven by the core principles of violence and reward.[1] Beyond these concepts they had little care for, or understanding of, the world around them, spending their time training, imagining new fighting techniques, and wandering the Lower Planes for weak entities to bully.[3][4] Their lack of intelligence generally forced them to accept their regular abuse, further contributing to their brutality in combat.[4]

Their martial prowess was genuinely fearsome and the creatures delighted in destruction.[3] Despite this, they were still relatively cautious, fleeing from battle when outmatched or outnumbered and unconcerned with honor or duty. They had a reputation as mercenaries, due to their love for treasure and tendency to work alone.[2]

Mezzoloths were of a highly magical nature and had a natural affinity for magical items, even those normally restricted by class or alignment.[4][5] They also possessed extraordinary vision, with their insectoid eyes seeing both the ultraviolet and infrared spectra. They could fight unarmed using their talons and fists to tear their enemies apart.[5] They had access to darkness and dispel magic spells, as well as the power to exude noxious yellow fumes to choke out their foes, while they fought in the fog unimpeded.[1] If pressed they could attempt to call in more mezzoloths to assist them, potentially even hydroloths, or try to teleport away. A limited form of telepathy allowed them to psychically communicate with others so long as they had at least basic sentience.[4]

When engaging in combat, mezzoloths first tried to soften their prey through their toxic mist before charging in with their weapons, dispelling any magical enchantments they noticed being used. If outmatched, they used their darkness spell to cover their escape and teleporting away. They preferred to use magical weapons and shields in combat but would resort to their powerful claws if none were available. Their group tactics were practically the same, with large squadrons breathing their mist before heading into battle.[3][1]

Mezzoloths acted as the foot soldiers in the mercenary armies of the yugoloths and the most plentiful members of their kind. Despite being the lowest in rank among the yugoloths, mezzoloths were not the weakest of their race.[8] Yugoloths from greater stations normally ruled over them with ease because of their low intelligence.[4]

Mezzoloths were easily drawn into service on the Material Plane by offering opportunities to destroy or great rewards for their assistance.[1] Their compliance with evil mortals normally depended on the price those beings were willing to pay and whether or not the mortals acknowledged the mezzoloth's "superior" position in the relationship. They commonly associated with night hags, demons, and devils, although they quickly grew weary of the constraining rules and regulations of the devils,[5] but were more likely to establish lairs than rampage across reality like the demons.[2]

Yugoloths often had to learn some kind of lesson that was built into their current rank as part of their advancement process. Mezzoloths had been taught that they were the weakest of the daemons and that everyone above them was more powerful, making them fairly easy to bluff, (while this was true of dhergoloths in terms of sheer strength, they were in many ways weaker).[9] By learning and calling out this bluff, often through the direct experience of defeating their dhergoloth "superiors", that being in command didn't always mean having raw strength, mezzoloths could advance to the next stage of power.[8][10]

In the eons since they first spawned, mezzloths grew to populate the lower planes, as well as the Astral and Ethereal Planes.[5] They were particularly common within Gehenna, and were theorized to have had a large portion of their population moved there.[4]

The true place where mezzoloths first formed was a point of contention among scholars. They were thought to be the yugoloth adaptations of another monster from the lower planes.[4] Some claimed that the mezzodemons originated within the depths of the Abyss, although later reports did not agree on this.[1][2]

Adventures
Dungeon #19: "House of Cards" • Dungeon #29: "'Til Death Do Us Part" • Cormyr: The Tearing of the Weave • Shadowdale: The Scouring of the Land • Dungeon #196: "Baba Yaga's Dancing Hut" • The Rise of Tiamat • Tomb of Annihilation
Novels
Forsaken House • Farthest Reach • Final Gate
Organized Play & Licensed Adventures
Black Blood • It's All in the Blood 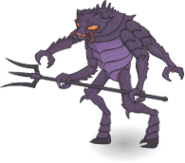 A mezzoloth from Idle Champions of the Forgotten Realms