Minotaur (Greek)
Minotaurs were a strong and combative race of monstrous humanoids resembling bull–human hybrids that were rare in Faerun.

Minotaurs were evil giant muscular humanoids with fur-covered bodies and bull-like heads. It was once believed that all minotaurs were male; actually cursed humans that had been altered by the gods or a demon lord to become a minotaur. That legend proved false as female minotaurs became more prevalent over the years.[citation needed]

Minotaurs were carnivores, but preferred the taste of human flesh.[4] They loved to dwell within maze-like caverns or ruins, where their innate sense of direction prevented them from getting lost. They lured travelers into their maze-like homes, where the minotaurs had the advantage over their unfortunate prey.[citation needed]

Many minotaurs couldn't be trusted with non-minotaur races at times, since most humanoids were their meal, and they would do anything for a quick bite out of a sleeping party member, slave owner, or wandering villager. They were not welcomed in any cities, and received an immediate death sentence, or a stoning if caught. Or worse, they were hunted by multiple hunters seeking the thrill of giving the beasts a taste of their own medicine.[citation needed]

Minotaurs were not highly intelligent, but possessed instinctive cunning and were adept at ambush attacks. Attacks in the dark were preferred so they could take advantage of their infravision. Minotaurs could track by scent alone, and would always investigate an unfamiliar scent. Minotaurs were fearless combatants, and would only retreat if their defeat was obvious.

All minotaurs were immune to maze spells.[4]

Many minotaurs worshiped the demon lord Baphomet and were not allowed in many cities because of this known factor. Most moved toward the chaotic evil alignment, and did not work well in groups, packs, or even parties due to their solo hunter-like nature.[citation needed]

Although rare and considered a barbaric people by the more civilized races, it is thought that at one time perhaps they may have been less so.

A reasonably sized population can be found in found within the Underdark in an area known as The Labyrinth.[7] 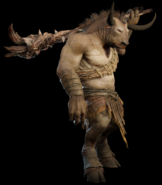 One of the minotaurs encountered in the Underdark. 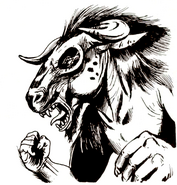 A minotaur from 2nd edition.