Neutral good or chaotic good
Minsc was a kind-hearted—but rather addled— Rashemaar warrior known for his habit of talking to a hamster. He believed that the animal, called Boo, was a miniature giant space hamster, but no one else ever saw any evidence of this.[1][3]
“
Where goes the stench of evil, so goes the cleansing wind of Minsc and Boo.
”
— Minsc pondering evil[4]

Minsc was a large,[5] bald[6] human. His face was partially covered in a purple tattoo.[7]

Minsc was very capable physically but mentally much more limited. Besides talking to the hamster Boo, whom he believed to be a miniature giant space hamster, he had a very simplistic view of the world and was often quick to decide that someone was evil and should be attacked. Fortunately, he was also kind by nature and was determined to be a hero. He was somewhat unstable and prone to flying into a rage,[note 1] as if his witch were being threatened.[3][4]

He espoused either a neutral[3] or chaotic version of a morally good outlook on life.[4][2]

Minsc was wholly dedicated to the protection of his traveling companion and "witch" Dynaheir. He believed her to be a brilliant woman, who would lead him to great glory.[3][8]

Minsc hailed from the far-off land of Rashemen. As a young man he hoped to gain admittance into the Ice Dragon berserker lodge. To prove his worth, he undertook his dajemma traveling alongside the young witch of the Wychlaran, Dynaheir, serving as her bodyguard.[3]

It was believed that that Minsc had suffered significant head trauma sometime in his past; it was not known what his mental capacities were before that, but he mentioned that it had happened around the time he befriended Boo.[3]

Dynaheir led Minsc in their travels, making their way to the western lands of Faerûn. At some point in the Year of the Banner, 1368 DR, the pair became separated as Dynaheir was abducted by a rather ferocious band of gnolls. Minsc traveled to the nearby town of Nashkel looking for heroes to help him save his charge.[3]

Following the events surrounding the iron crisis on the Sword Coast, Minsc and Dynaheir settled in Baldur's Gate for a short time. Dynaheir wanted to stay in the region to investigate rumors regarding the Shining Lady, Caelar Argent.[8]

When Abdel Adrian was secretly released from prison, Minsc joined him in his travels, accompanied by Dynaheir, the young mage Imoen, the Harpers Jaheira, and Khalid, and of course Boo. The group was ambushed in the forest and imprisoned in a dungeon beneath Athkatla. Several members in their party were tortured, and both Khalid and Dynaheir were killed.[8][4]

In Minsc's eyes he caused a failure that resulted in the death of Dynaheir. He was distraught over the loss of his witch, who had been murdered in front of his eyes, and his failed dajemma.[4][note 2][9][note 3] He was believed to have escaped the dungeon at the same time as his allies Abdel and Imoen.[10][note 4]

Around the Year of True Omens, 1409 DR, the merchant Orburt Lewel ordered the construction of a 9‑foot (2.7‑meter)-tall statue and pedestal in the Wide in honor of Minsc, who had saved Lewel's life. The statue, known as the Beloved Ranger, depicted Minsc cupping Boo in his hands. It was a popular landmark and meeting point in the busy commercial district.[11][12][13] Unbeknownst to anyone at the time, the statue was actually the real Minsc and Boo under the effects of petrification magic.[14]

In 1479 DR, a group of teenagers vandalized the Beloved Ranger statue, breaking off its hands and Boo. The vandals were later apprehended and the statue was fixed.[12]

Sometime in the 1480s DR, the Beloved Ranger was accidentally struck by a wild magic surge caused by the wild mage Delina, as a result of an attempt to cast a spell at an attacking gargoyle. The surge dispelled the petrification effect, returning Minsc and Boo to life. The pair joined up with the thieves Krydle and Shandie to battle the Cult of the Dragon. Coran, now a member of the Parliament of Peers, was the only person who recognized Minsc as anyone but someone who was dressed like the statue.[1][14]

Minsc and Boo have also assisted the Emerald Enclave in their battle against the four elemental cults.[15][note 5]

Some time later, Minsc and his companions, who became known as the Heroes of Baldur's Gate, while working as sellswords in the Lower City district of Baldur's Gate, helped defend a temple of Kelemvor against an attack of werewolves who had broken in. The werewolves fled after stealing the temple relics in search of a magic amulet and kidnapping Nerys, a cleric of Kelemvor. Upon chasing them back to their lair with the help of Boo, Minsc and his companions were swept up by mists and transported into the land of Barovia.[16]

While in Barovia, Minsc had his fortune partially read by Madam Eva, but stormed out of her tent after she predicted that he would fail in destroying the evil that permeated those lands.[17] The companions also briefly interacted with the wereraven Davian Martikov after saving his son Adrian from an attack of ghouls and spent the night at the Wizard of Wines winery.[18]

The following day, the companions proceeded to Vallaki, which was holding the Parade of Purple decreed by the burgomaster Vargas Vallakovich. During the parade, they were attacked by Strahd.[19] After narrowly surviving a confrontation with Strahd and his vampire and werewolf minions, the badly wounded companions managed to escape Barovia through the activation of the amulet by Delina[20] and were transported back to Faerûn somewhere in the Spine of the World, about half a day's travel away from Fireshear.[6]

In the mountains, the weary group was ambushed by ogres, but was helped by Saarvin, a dragonborn of gold dragon ancestry. Despite their victory against the ogres, Minsc, demoralized by the defeat and narrow escape from the clutches of Strahd, felt unworthy and a shadow of his former self,[6] despite receiving encouragement from Nerys and Boo. By his figure, the group would need to defeat five times as much evil in order to regain their status as heroes of good.[21]

Soon after the group's recovery in Fireshear, the city was attacked by a group of frost giants led by Lord Gryttmort.[6][21] The giants were holding the white dragon Nylanthe captive. The adventurers, helped by a detachment of griffon riders trained and commanded by Dasharra Keldabar, defended the city from the attack, while Krydle set Nylanthe loose to attack her former captors and force them to break off the attack.[21]

Interrogating Fjroul, a captured frost giant, Shandie learned that Gryttmort planned to overthrow Storvald and become a jarl in order to ascend in the broken Ordning, by stealing an orb of dragonkind from Nylanthe's lair. In possession of the orb, Gryttmort would muster an army of giants and dragons and conquer the North. Upon reaching Nylanthe's lair to warn her of the impending threat, the dragon revealed that Gryttmort was holding her eggs hostage in exchange for her cooperation and agreed to help the group if they retrieve her eggs. However, the giants attacked and used the orb to command Nylanthe to collapse the cave on Minsc's group.[22]

After escaping, the group then flew to Svardborg to reclaim the orb on Dasharra's griffons, whith whom Minsc got along especially well.[23] However, upon attempting to recover Nylanthe's eggs, the group was ambushed by the giants. In the fight, Krydle successfully stole the eggs, while Shandie separated the orb of dragonkind from Gryttmort, releasing his hold on the white dragons. At the same time, Boo accidentally drunk a potion of growth and temporarily became a giant-sized miniature giant space hamster. Victorious, the group returned to Fireshear to celebrate.[24]

Minsc and Boo, from Legends of Baldur's Gate.

Portrait of Minsc and Boo from Baldur's Gate II: Shadows of Amn. 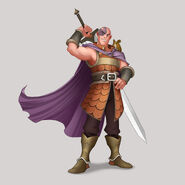 Minsc and Boo as they appear in D&D Dice Adventures 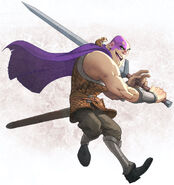 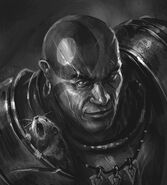 Fan art of Minsc and Boo, by Takeda11