Scorpion
Monstrous scorpions or giant scorpions were a breed of arachnids known for their poisonous stingers. They were found in a variety of climates, but are most numerous in deserts.[2]

Giant scorpions are the size of horses. They were perfectly content with attacking whatever prey was smaller than themselves, including humans.

Scorpions were active hunters. They tracked their prey with their keen senses and then grasped it with their scissor-like pincers. Once in the scorpion's grasp, the prey was stung repeatedly until it stopped moving. It was then consumed by the arachnid, whether or not it was still living.[citation needed]

North of the continent of Faerûn, giant scorpions could be found in the deserts of Anauroch.[6]

In the East they were commonly found in the Calim Desert,[7] Raurin Desert, and the Quoya Desert.[8]

In Zakhara, the Wind of Fate often applied venom from giant scorpions to their blowgun darts.[9]

Some races were known to use their chitin to construct armor.[10]

Monstrous scorpions were known to be used by members of the Refuge Bay Trading Company of Chult. These scorpions were either trained or magically bound to a representative, both as defenders and enforcers. One of these representatives with a giant scorpion could be found in Baldur's Gate docks circa 1360 DR. The scorpion served as hands of his master, as he lost one hand as punishment, and the other was paralyzed in a fist. The monstrous scorpion was also a reminder and overseer of that Refuge Bay Trading Company to ensure he never stole from them again.[5]

Unlike some giant arachnid species, such as the less widespread solifugid and uropygus, monstrous scorpions were not considered to be spiderkind.[11] 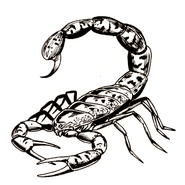 A giant scorpion from 2nd edition.