Halflings, 18 adult, 7 youth
Moon Mountain Brewery was a brewery, distillery, and barrelwright run by two families of halflings, circa the Year of Wild Magic, 1372 DR.[1] The business was secretly supported by the Zhentarim as part of their smuggling operations.[2]

The Moon Mountain Brewery was located in the hinterlands known as the Savage Frontier. It was established on the banks of the Unicorn Run not far from the southern border of the High Forest. It was a two-day journey north of Secomber.[1][3] The closest road was the Iron Road where it turned northeast to follow the Unicorn Run to the Stronghold of the Nine.[4] The terrain around the building was tree-covered hills, but not far away were cleared fields for growing the various crops used to make the beverages.[1]

The brewery was built by halflings that appreciated trees and did not hold to many construction conventions. The structure was integrated into the trees with a hodgepodge of odd staircases, balconies, flying bridges, platforms, conveyor belts, slides, chutes, and ladders—and that was just the outside of the building. The construction was mostly of duskwood and pine, with portions of maple and oak, and smatterings of elm and shadowtop. None of the wood was painted, so the age of a section of the building could be estimated by the amount of silver-colored wood on it. They used rough-hewn beams, planks, and boards in near-natural shapes, fitted together as best they could with wooden pegs. The gaps were filled with moss, pitch, or sap, and repairs were usually done by nailing another board over the old one. Roofs pitched in all directions and spouted chimneys of metal or riverstone. Living trees served as anchors, pillars, banisters, columns, joists, and storage.[1][note 1]

A waterwheel placed in the Unicorn Run provided fresh water and the power to pump it to the various vats, boilers, tubs, kettles, and cauldrons that served the brewing and distilling processes. There was also a small lumber mill area for making barrel staves, construction materials, and firewood. Stone-lined pits were cut into the low hills around the brewery and used for more storage space. Trees with a large bole were also used as storage by carving out a central cavity and lining it with small stones. The trees continued to grow around these halfling-sized rooms. Usually, the nearest wall had a panel that opened or swung aside to allow access to these outdoor storage spots. One of the tallest trees held a platform, accessible by ladder, that was used as a lookout and for hanging lanterns to signal the field hands about mealtimes, danger, or other needs.[1][5][note 1]

The interior of the brewery was a three-dimensional maze of oddly shaped rooms connected by ramps and more staircases, with some ladders (interior or exterior) used as shortcuts. The floors were sturdy flagstone with reeds and dirt added to even them out and make a level working surface. Most of the space was filled with the raw ingredients, presses, vats, casks, a network of pipes and troughs for water and beverages, and a wide variety of glass bottles.[1][note 1]

The Moon Mountain Brewery was a hive of activity as all residents, including the children, worked industriously for many hours a day. The only time they stopped to relax was when the weather prevented them from working outside and they were caught up on the dozens of inside tasks.[1]

By far the greatest quantity of the brewery's output was Moon Mountain Ale, a clear, light-colored ale that was sold by itself and bundled with their Moon Rum in topkegs (a keg with a compartment to keep two liquids from mixing) for making the popular drink known as an ale flip. There was also a robust bitter beer with a flavor that hinted at salted nuts, known as Moon Mountain Dark. It was a favorite of gnomes, dwarves, and halflings, but humans preferred it mulled. Moon Mountains's fermented apple cider, mixed with water and mint, was known as moonslake. Due to clever marketing, sales of this fresh-tasting beverage skyrocketed in Waterdeep in the early 1370s DR.[2]

Unknown to all but the three senior proprietors, a significant portion of the Moon Mountain Brewery's income was from being part of the Black Network. Their primary contact was a human trader named Tarth Brallowgath who visited regularly to buy their products, sell them supplies, and give secret instructions related to smuggling. The staff were quite skilled at making barrels, casks, and kegs with extra compartments, and occasionally these would leave the establishment containing coded messages or small items of value. The cabal of three were the ones to choose which containers were sent to a destination to fill an order. Very rarely, Brallowgath ordered them to add either bittermint or tulade poison (both made at Moon Mountain) to a particular keg for a specific recipient. The halfings were loath to do this—they were greatly concerned that one of these death-casks would end up in the wrong hands and they would be held responsible—but they needed the Zhentarim's protection and business to keep their operation going.[2]

Tarth was not the only Zhent to visit the brewery, but he was one of a few that did so openly as a legitimate merchant. The haphazard architecture disguised a number of secret drop-off spots for leaving messages or stolen goods in the dark of night by agents that did not want to be seen.[5]

Nearly every room in the brewery had at least one secret panel, usually near a door frame, that contained various glass bottles of contact poison (either sassone leaf residue or terinav root[6]) that could be thrown at intruders.[5]

Some of the doors into the building were false, opening onto rooms or corridors that were riddled with traps.[5]

Moon Mountain Brewery was founded by Oblar Minstrelwish, a halfling adventurer that made a name for himself (at least among the hin of Secomber). During his travels, he met and fell in love with a half-elf sorceress named Mrune Moontan that, among her many attractive qualities, brewed the best ale that Oblar had ever tasted. It was her recipe and technique that produced Moon Mountain Ale, and it was named after her, in a way—those same hin of Secomber affectionately corrupted her name to "Moon Mountain".[1]

As of 1372 DR, the establishment was run by Nurvala "Mother" Minstrelwish and Yarimmur Borulglar, assisted by Kelter Minstrelwish. Kelter was a most curious youth and made a habit of spying on Nurvala's and Yarimmur's meetings with Tarth Brallowgath until he knew just about everything that went on between them. When the two older halflings discovered this, they took him into their full confidence rather than try to squash his initiative.[2] 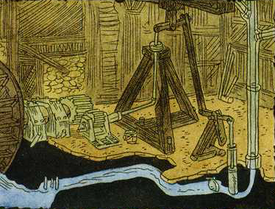 Cutaway view of the pump turned by the waterwheel to feed the brewing vats. 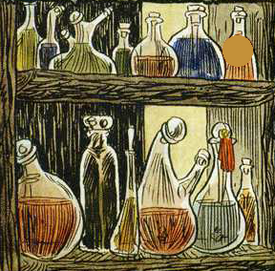 Bottles of poison for hurling at intruders.