This article is about the archipelago. For the kingdom, see United Moonshae Isles.

The Moonshae Isles (pronounced: /ˈmuːnʃeɪ/ MOON-shay[1]) were a group of islands that formed a roughly circular archipelago with the Sea of Moonshae in the center. They lay roughly 400 miles (644 km) west of the region of Amn and to the southwest of the Sword Coast. As of 1371 DR, the majority of the Moonshae Isles were ruled by High Queen Alicia Kendrick, who ruled from the capital city of Caer Callidyrr on Alaron.[2]

After the Spellplague, House Kendrick lost much of their control over the isles. In 1479 DR, much of the isle of Alaron was ruled by House Kendrick, although the King's forces did not control the entire island. The Isle of Snowdown was controlled by the vampire Lady Erliza Daressin, who was loyal to Amn. The Isle of Gwynneth was controlled by the Kingdom of Sarifal, which was ruled by High Lady Ordalf. A tribe of fomorians crossed from the Feywild into Faerûn after the Spellplague and took control of the island of Oman. The isle of Moray was under the control of Malarite lycanthropes.[3]

The islands that made up the Moonshae Isles were as follows:

Gwynneth
By 1479 DR, most of the isle was controlled by fey loyal to High Lady Ordalf and was known as Sarifal.[3]

Korinn Archipelago
Hundreds of small islands stretched northward from the main archipelago into the Trackless Sea. The isles were favored by pirate bands who preyed on shipping.[3]

Mintarn
This medium-sized island was ruled by the tyrant Tarnheel Embuirhan in mid–1300s DR. This island was known as a haven for pirates, fugitives, mercenaries, and other unsavory types who were looking to get away from the watchful eyes of the authorities. The wine halls and fest halls of this island were renowned for how dangerous they were and how amazing their services were.[5]

Moray
In 1479 DR, this island was the most war-torn of the Moonshaes. The interior was controlled by the Black Blood Tribe of lycanthropes while the Orc Skull Mountains were controlled by humanoid tribes. Only a few humans lived in villages on the coast.[3]

Norland
Inhabited mostly by humans who earned their livings through fishing.[3]

Oman
Once a center of Northlander culture, the island was overrun by fomorian giants after the Spellplague.[3]

Snowdown
This small isle in the southeastern Moonshaes was annexed by Amn and was ruled by Erliza Daressin, a vampire.[3]

Tetris
This small island was covered in green hills and rocky coasts, as well as a small village of thatched huts along a river. Moira, the wife of Captain Hrolf of the Elfmaid lived here. The village and their druid worshiped local spirits in the river and elsewhere with gold offerings, which the pirates of the Elfmaid once snatched after drugging the villagers.[6]

The climate of the Moonshaes was considered subarctic. The weather was severe, with long winters.[4]

The Moonshae Isles were populated mainly by the Ffolk and the Northlanders, two human societies. Over the one hundred years since Queen Alicia consolidated her rule, the two groups intermarried and became more culturally unified.[3]

There were a small number of Llewyrr elves living in isolation on the islands of Alaron and Gwynneth. Dwarves and halflings also populated the Moonshaes although their numbers were far smaller than the human occupants.[citation needed]

As of 1479 DR, Black Blood Tribe of lycanthropes controlled the island of Moray. The tribe worshiped the Beastlord Malar and consisted of native Faerûnian were-creatures as well as some that crossed over from Brokenstone Vale in the Feywild.[3]

A group of fomorians loyal to Queen Connomae entered Faerûn after the Spellplague and conquered the island of Oman. The formorians were loosely allied with the Black Blood Tribe.[3]

The Northmen were a violent, war-like society with little interest for or tolerance of the Ffolk's monarchical ways. Historically, this created a continuous tension between the two human peoples, with Northmen raids on Ffolk farmsteads a common occurrence. A large majority of the Ffolk worshiped a druidic goddess the Earthmother, an aspect of the benign goddess of agriculture, Chauntea. The Northmen worshiped warlike deities like Tempus (god of war).[citation needed]

The conflict escalated into what has been termed the Darkwalker Wars, which lasted a number of years. In the start of the conflict, the Northmen and the Ffolk fought a series of battles mainly around Caer Corwell (Gwynneth). The true force behind the invasion of the Northmen was the creature known as Kazgaroth The Beast, a minion of Bhaal (god of murder). Through Bhaal's powers, Kazgaroth had taken the shape of the Northmen chieftain Grunnarch the Red (Iron Keep, Oman's Isle). Through him, Kazgaroth initiated the invasion of Gwynneth and Caer Corwell.[citation needed]

En route to Caer Corwell, Kazgaroth (in Grunnarch's shape) challenged and killed the Leviathan, which was one of the children of the goddess Earthmother. Around the town and fortress of Caer Corwell, the Northmen were halted by the combined forces of Prince Tristan Kendrick and his companions.[citation needed]

In year that past, the conflict between the Northlanders and the Ffolk waned due to the hard work of the High King Tristan Kendrick and later through his daughter, High Queen Alicia Kendrick. Through their queen's work for peaceful solutions to arguments between the Northlanders and the Ffolk, the Moonshaes enjoyed several decades of relative peace.[citation needed] By 1479, the direct confrontation between the Northmen and the Ffolfk had transformed into an awkward form of tolerance, as the two have learned to share the islands.[7] This is, in part, due to the problems both cultures have been having on their home islands.

In the Year of Risen Elfkin, 1375 DR, the Fey city of Karador rose from the waters of the Myrloch on the Island of Gwynneth. The leShay High Lady Ordalf proclaimed herself queen of the Island, giving it the name of Sarifal. The human kingdom of Corwell, and its capital Caer Corwell fell into ruins.[2]

By the year 1479 isle of Gwynneth has become deeply connected to the feywild. In the northern forests of the island, Prince Araithe, fights against dark fey who seek to take the land for themselves. High King Derid seeks to establish an embassy, but can not find a way to secure Lady Ordalf’s permission.[7]

Moonshea Islands location in reference to the coast

Southern Half of Moonshae Islands 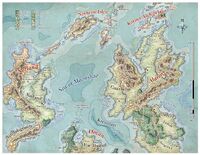 Northern Half of Moonshae Islands

Prince Ketheryll brings Durnhal and Morgan of Corwell before High King Gwylloch of the Moonshae Isles for his judgment (295 DR). 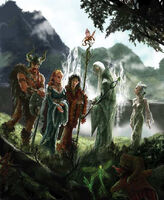 The leShay High Lady Ordalf announces the rebirth of Sarifal, a fey kingdom in the Moonshaes in the Year of Risen Elfkin

Moonshae Isles
Add a photo to this gallery

Retrieved from "https://forgottenrealms.fandom.com/wiki/Moonshae_Isles?oldid=589090"
Community content is available under CC-BY-SA unless otherwise noted.