Mulhorand (pronounced: /məlˈhoʊrɑːnd/ muhl-HOH-rand[5]) was one of the Old Empires in eastern Faerûn. The Mulhorandi were brought to Toril from Earth by the Imaskar Empire looking for some manpower.[6] After countless praises, Ao contacted Ptah who led a part of the Mulhorandi pantheon to Toril.[7] Ironically, their rival in the millennia to come was another human tribe captured by the Imaskari at the same time, which founded the empire of Unther.[8]

Mulhorand was destroyed by the Spellplague and the empire of High Imaskar came to comprise its former territories.[9] After the Chosen of the Mulhorandi gods appeared around the time of the Second Sundering, however, they and the wizard Nezram rallied the Mulan to overthrow the Imaskari once more, driving them into the Plains of Purple Dust.[10]

The populace of Mulhorand was primarily composed of humans of three primary ethnic factions: the Mulan, the Turami, and slaves from Thay known as Tethens. Other races proved hesitant to follow the Mulhorandi pantheon upon the nation's founding, and were exiled at that time; the non-human population remained low as a result. Mulhorand utilized a caste system with three social classes:[11]

Nobility
Members of Mulhorand's nobility took positions in the nation's government, often as priests, wizards, or bureaucrats. These individuals shaved their heads and painted a series of one to three blue circles on their foreheads to indicate social standing and education.[11]

Middle Class
Mulhorand's middle class was composed of landowners and craftsmen. Members of this social class were often wealthy, and were considered for marriages by members of the nobility as a result.[12]

Slaves
The majority of people in Mulhorand fell into this category. Slaves were owned by the different clergies of the nation, and were guaranteed humane treatment by law. Despite this, the life of these individuals was a hard one, though less so than typically experienced by slaves in other nations.[13]

After the reformation of Mulhorand in 1487 DR, the deities of the Mulhorandi pantheon abolished slavery altogether.[10]

The people of Mulhorand were arrogant individuals that considered themselves better than any rival nation. Law was paramount to the nation's citizens, and change was avoided whenever possible. The government was run by the clergies devoted to the deities of the Mulhorandi pantheon, with the church of Horus-Re being foremost in power. However, despite the peaceful existence these priests sought to create, the different priesthoods were plagued by infighting, bickering, and struggles. These conflicts occurred both within their individual orders and against those of other faiths.[13]

After the reformation of Mulhorand in 1487 DR, the deities of the Mulhorandi pantheon set aside their differences and focused in rebuilding the country, leading to a peaceful existence between their clergies.[10]

As a theocratic nation, clergy of the Mulhorandi deities were treated with great respect and honor. Priests expected special treatment from the community, and held authority in all matters; public prayers were performed daily. The wealthy Mulhorandi also spent time planning and constructing personal tombs, preparing for their deaths and their continued life thereafter.[13]

Peoples native to Mulhorand spoke Mulhorandi, a language that remained largely true to the tongue spoken by the Mulan peoples upon their arrival to Faerûn. In its written form, it was composed of complex pictographs used to communicate ideas and concepts.[13]

Mulhorand was located in an arid region stretching between the River of the Dawn in the north to the Lake of Salt in the south. The nation's western border was marked by the River of Swords, and it possessed no established border to the east. Its deserts, mountains, fields, and other geological features fell into four distinct divisions:[14]

This region of flat plains, also called the Plain of Life, extended south from the city of Skuld to the River of Swords. The area was heavily irrigated and featured occasional marshes.[14]

Also known as the Great Vale, this region lay between the Dragonsword Mountains and the Menesankh, and included the majority of Mulhorand's farmlands.[14]

The mountainous regions of Mulhorand, including the Sunrise Mountains and the Dragonsword Mountains, composed the Furitep.[14]

This region was composed of high plains that lay between the cities of Skuld and Sultim.[14]

The Alamber Sea bordered Mulhorand on the west. This sea harbored both pirates and sahuagin within its area.[15] The sahuagin raid posed a constant problem for Sultim.[16]

The Plains of Purple Dust were located in eastern Mulhorand. The faintly magical sands of this area were home to purple worms, nomads, and other hostile creatures. Connections to the Underdark were also common in this region.[15] Raurin, the Dust Desert, was a wasteland hiding numerous ruins and forgotten magic. This region was also home to dragons and efreeti.[15]

The Dragonsword Mountains in central Mulhorand were considered impassable due to a large monster population[15] and because the Mulhorandi simply didn't climb mountains.[17]

The Cliffs of Leaping Horses was a region of plains considered to be the horse land of Mulhorand.[17]

Skuld was the capital of Mulhorand. Skuld was also recognized as the oldest continually inhabited city in Faerûn. Gheldaneth was a port city that housed Mulhorand's Great University and the Wizard College. Sultim was Mulhorand's largest port, and the center of the worship of Anhur. Neldorild was relatively new (as of the 14th century DR) and was constantly growing. Its community served as a retreat for both the wealthy and retired. Mishtan was a town ruled by the church of Osiris. It served as the home of the Mulhorandi that worked to expand the nearby Land of the Dead.[19]

Mulhorandi vessels were named after sea creatures or sea-related myths.[20]

In response to a plague that killed much of its people, the Imaskar Empire captured over one hundred thousand humans through the use of two portals opened to another world. These portals were then closed and all connections between the two worlds were sealed; the captured peoples, now called the Mulan, were enslaved by the Imaskari.[19]

The Imaskari barrier inhibited contact between the Mulan and their deities. However, Ao intervened and allowed mortal manifestations of these deities to bypass the barrier and enter Toril directly.[19] The deities battled the Imaskari, eventually defeating them in the year −2488 DR. The divine manifestations founded the nation of Mulhorand in −2135 DR, as well as the rival nation of Unther in −2087 DR.[21]

In −1967 DR, war broke out between Mulhorand and Unther. The conflict ended in −1961 DR when the ruling deities agreed upon the River of Swords as a common border between their two nations.[21]

In the year −1081 DR the Theurgist Adept Thayd opened a portal to a world populated by gray orcs. Thayd was executed shortly after for inciting rebellion, and the portal remained forgotten until discovered by the orcs. In the year −1076 DR, the humanoids invaded Mulhorand and Unther, beginning what later became known as the Orcgate Wars.[22]

In the wake of the Orcgate Wars, Mulhorand began a prolonged decline in power. Its daughter states broke free and formed the nations of Murghôm, Semphar, and Thay. This decline continued until the Time of Troubles, at which time the Imaskari barrier was dissolved by Ao. The divine manifestations that had ruled for centuries rejoined their primary essences; Mulhorand was ruled by a true mortal king for the first time in its history. After a brief upheaval, the nation stabilized under the rule of the clergy.[24]

In response to the death of Unther's manifest deity Gilgeam the Tyrant, the pharaoh, Horustep III, allowed the clerics of Anhur to cross the River of Swords and invade their long time rival nation. Assisted by a mercenary company, the Gold Swords, Mulhorand invaded Unther in 1371 DR.[24] Although the initial invasion met with great success, fighting fell down to low-level skirmishes for years until 1379 DR, when the Mulhorandi launch one final wave of conquest, swallowing the weakened empire, ushering in the short-lived "Third Mulhorandi Empire".[25]

No more than six years after the conquest of Unther, Mulhorand was destroyed by the Spellplague in 1385 DR. Many of the Mulan people were killed during the alteration of the landscape[9] or transported to the world of Abeir,[26] and the few survivors that remained in Toril fled to other lands such as Chessenta. The Mulhorandi pantheon vanished without a trace.[9]

Mulhorand soon became completely devoid of civilization, and the Deep Imaskari wizard Ususi Manaallin founded the empire of High Imaskar on its former territories, with immigrants from Deep Imaskar comprising most of its citizenry.[9]

In the wake of the Second Sundering, when the gods of Faerûn began to pick Chosen to enact their will, several mortal descendants of the old Mulhorandi gods found themselves possessed by their divine ancestors and immediately began a war against the Imaskari. With the help of Nezram the World-Walker, the returned deities and their Mulan servants won out, driving the Imaskari east into the desert and began the process to rebuild their old nation again.[10] 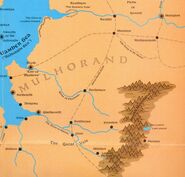 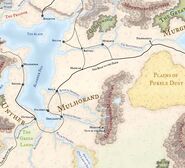 3e map of Mulhorand
Add a photo to this gallery

Retrieved from "https://forgottenrealms.fandom.com/wiki/Mulhorand?oldid=566250"
Community content is available under CC-BY-SA unless otherwise noted.