Mulmaster (pronounced: /ˈməlmɑːstɛr/ MUHL-mah-ster[3]) was a city located in the rugged area west of the Earthspur and Galena Mountains in the eastern part of the Moonsea region. After years of opposition, the city finally joined the Zhentarim, becoming a decadent sprawl riddled with crime and corruption. The buildings nearest the docks were the most dilapidated and dangerous, full of poverty and rife with crime. The rich area of the city resided further up the mountainside, imposing its will over the rest of Mulmaster.[4] A person from Mulmaster was known as a Mulmasterite.[5]

The lands surrounding Mulmaster were treacherous to cross and boasted many dangers to its inhabitants. The majority of the land traffic through Mulmaster came from the south, intersecting with Cormanthor, The Vast and the eastern region of the Dragon Reach. With the exception of Ironfang Keep, there were few settlements near Mulmaster in the eastern Moonsea.[4]

The grand city of Mulmaster was ruled by the governing council known as the Blades, led by High Blade Rassendyll Uoumdolphin. Other Blades on the council, along with the nobles of the city, were either threatened or otherwise influenced into supporting the High Blade in some manner.[6] The Blades commanded the armed forces, numbering about 6,000 well-trained soldiers. [7]

The city of Mulmaster was firmly entrenched in the politics of the Moonsea. As Rassendyll Uoumdolphin was married to the Red Wizard Dmitra Flass and the city that once stood as a bulwark against the spread of the Zhentarim struck an alliance with the group they previously opposed, Mulmaster was caught in a power play by both organizations, while recieving the benefits of an alliance with both.[6]

“
If it's spilt blood you want to see, go you to the marketplace of any fair town. There they lie, cheat, and stick knives in each other every day. Best come early—all idle folk in every such place known how good the show is, too. The crowd of bloodthirsty onlookers can make finding a good watching-spot a mite difficult, especially for an outlander.
— Arglauth Melroryrr, Sage of Mulmaster, Arglauth's Guide to the North[8]
”

The nobles in Mulmaster were called Zor for males and Zora for females. The head of a noble house, regardless of gender, was a lord.[9]

Tower of the Blade
Home to the ruling family of Mulmaster, as well as their patriarch Rassendyll.[7]
House of the Black Lord
A temple of Bane that was constructed in the High Blade's deal of allegiance with Fzoul Chembryl.[7] 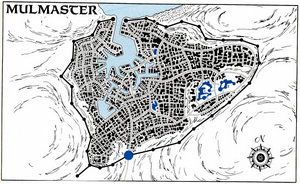 A map of Mulmaster in 1358 DR.
Add a photo to this gallery

Retrieved from "https://forgottenrealms.fandom.com/wiki/Mulmaster?oldid=476706"
Community content is available under CC-BY-SA unless otherwise noted.