Myratma was one of the most important cities in Tethyr, known around Faerûn for the quality of its textiles, owing to the output from the Tethyr Mills outside its walls.[1] It was once called Artrimmar.[2]

Myratma was located in County Elemetar in the Purple Marches at the intersection of the Red River and the River Ith.[1]

The city was divided into a total of six districts.[1]

Ten percent of the city was occupied by the former estate of the Jhannivvar clan, which was surrounded by its own wall in the northeast quadrant of the city.[1]

The city was ancient and still bore signs of Calishite and even Dwarven architecture well into the 1370s DR.[1] Ruined dwarven stonework could still be seen in the city walls and streets.[6]

Myratma had three barbican gates to defend entry into the city: Westgate, Southgate (or "Trader's Gate"), and Eastgate. Each gate contained a contingent of 20 guards. Bridges crossed the rivers to reach Southgate and Westgate.[1]

Officially, the city was ruled by the Myratman Town Council, which consisted of one Councilor for each of the six districts. A seventh member, the Councilor-Vizer, presided over the Council and would break tie votes.[1] Guildmasters were often seated on the Town Council.[7]

In 1370 DR, the town council was secretly a puppet government for Rhangaun of the Twisted Rune, who controlled Councilor-Vizer Jamil al-Ferasi by means of magical charms. He had had control of Jamil's family for five generations by that time.[1]

The city maintained a watch of 150 members and a garrison of 400 royal soldiers.[1]

Myratma became known as the Textiles City because of its high-quality canvases, silks, and other fine textiles. Most of these were produced in the Tethyr Mills, just outside its gates along the River Ith.[1]

The city depended on commerce and trade for its livelihood. Most of the agricultural produce from the center of the country flowed through Myratma on the way to other lands by sea. The goods were floated down the River Ith by barge. Calimshan was a major purchaser of Tethyrian grain coming through Myratma.[5]

With the exception of Zazesspur to the north, the markets of Myratma tended to sell at higher prices than other cities of Tethyr. In 1370 DR, port and dock duties were three gold coins (aenar), and caravan and wagon tolls were one aenar.[4] Market fees varied, depending on the season of the year.[7]

The site that would later become Myratma was first settled by the subjects of the Great Pasha Memnon sometime between −6800 DR and −6400 DR as part of the kingdom of Memnonnar.[8] This city was laid to ruin during the Era of Skyfire and subsequently rebuilt by the dwarves of High Shanatar,[6] who removed the brass and red brick from the original buildings to adorn their new tunnels and halls.[9]

Myratma was first settled by humans sometime after the Second Age of Calimshan when the Calishites began establishing outposts and garrisons in what they called the Purple Marches.[10] It was founded by the Jhannivvar clan.[1] During the Tethyrian rebellion against Calimshan in that country's Fourth Age, the city changed hands several times. It was first taken from Calimshan by Tethyr in −307 DR,[11] at which point it was renamed "Artrimmar",[2] then taken back for Calimshan in −230 DR. Tethyr took it back again in −212 DR, when Darrom Ithal brought independence to Tethyr until the time of the Shoon Imperium.[11] (Myratma was, in fact, the original home of the infamous Akkabar Shoon the Elder.[12])

Myratma was to play a key role during the Reclamation Wars. It was the site of two major battles, the First and Second Sieges of Myratma.[13][14]

In 1368 DR, "Prince" Yusuf Jhannivvar claimed rulership over the city and refused to submit to the new queen of Tethyr, Zaranda Star. For a month, the Reclamation Army laid siege to the city, but by the last day of Eleint that year, they were defeated, and Zaranda Star and several other leaders of the Loyalist movement were taken prisoner and tortured.[13]

The Second Siege began on the Feast of the Moon, when Prince Haedrak Rhindaun III arrived and gathered the army together again. The Second Siege lasted three months, during which time a successful rescue attempt by Haedrak and Timoth Eyesbright was made to recover the queen. While the rescue was under way, Vajra Valmeyjar, Perendra Raslemtar, and Onyx the Invincible sabotaged the city, clogging the wells and weakening its walls.[14]

The siege finally ended in a battle known as the Storm Siege on the last day of Ches, 1369 DR, when Loyalist druids and clerics bombarded Myratma with lightning and blew open its gates. The army stormed in, and the city was taken when Haedrak and Zaranda slew Yusuf on the west wall.[14]

Reconstruction of the city's Eastgate and walls were completed by 1370 DR.[1]

Below the city of Myratma, the ruins of the first efreet settlement there still remained. A mummified sorceress, Kalloch, lived in the undercity for centuries, building an army of flameskulls, ghasts, ghouls, and other undead.[9]

The Council House
This central wing of the former Jhannivvar Palace was repurposed to serve as the meeting place for the Myratman Town Council.[1]
The Efreeteum
This Calishite-style festhall's employees all wore efreet masks.[1]
The Hand
This tavern contained the petrified remains of a would-be assassin of Shoon IV.[1]
The Gambling Ghost
This inn was known for the card-playing ghost that haunted it.[1]
Khaarysaim
This mansion served as the county seat of Elemetar.[1]
The Kraljaom Distillery
This distillery in the western side of the side was known for its Purple Hills Cider.

The Aldhaneks
A merchant family opposed to Zaranda Star's rise to power.[15]
The Basilayers
A family of recruiters and military trainers.[16]
The Benisitts
A clan of shipwrights.[1]
The Errlyks
A clan dealing in herbs, spices and wines.[1]
The Frajals
A clan of textile merchants.[1]
The Jhannivvars
A large clan, spread over both Tethyr and Calimshan, who founded Myratma.[17]
The Onajams
A clan of cartographers.[1]
The Sakhars
A merchant family who were cousins to King Alemander IV, slain during the Ten Black Days of Eleint.[18]
The Tiralnars
A well-known mercantile family.[19]
The Uroks
A clan of barge traffickers.[1] 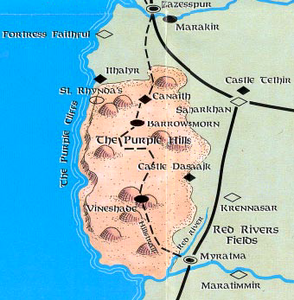