Myste was a human illusionist.[1]

Myste clad herself in blue robes, with a matching blue headband and blue earrings. She had black hair, light skin, and attractive features.[1]

She was especially fond of using spells involving color or fog, preferring to use those in place of the more standard illusion spells.[1]

Myste owned a stone of mixed luck,[2] a luckstone[1] variant that ensured her good luck 85% of the time. The remaining 15% were utterly unfortunate, forcing her to endure many embarrassing and comical blunders.[2]

She also owned a powerful ring of protection +4.[1]

Although she originally intended to become a generic wizard, Myste found herself drawn toward illusion magic. When a teacher informed her she was merely "chasing clouds", she replied "Then call me Myste!", thereby adopting a new moniker.[1] 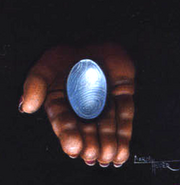 Myste's stone of mixed luck
Add a photo to this gallery

Retrieved from "https://forgottenrealms.fandom.com/wiki/Myste?oldid=503280"
Community content is available under CC-BY-SA unless otherwise noted.