Nashkel was a small town on the northern slopes of the Cloud Peaks.[1] Although formally a part of Amn, Nashkel was separated from the rest of the kingdom by the mountain passes and as such, was relatively autonomous.[1]

Sometime before Mirtul, in the Year of the Banner, 1368 DR, the Cyric cleric Mulahey and his kobold minions began to contaminate the iron mine outside of Nashkel. He did so under the direction of the bandit-leader Tazok, and by extension, Rieltar Anchev of the Iron Throne.[2]

These events directly led to the Iron crisis that plagued the Sword Coast in the same year. As tensions built up between Amn and the Council of Four of Baldur's Gate, Nashkel became a staging point for Amnian soldiers, as they prepared for battle against the Flaming Fist.[2]

That same year a traveling carnival came to Nashkel and set up just east of town. It featured a number of merchant stalls, gambling tents end even performers such as the Great Gazib and the Amazing Oopah.[2] 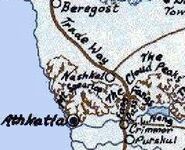 An aerial view of Nashkel as seen in Baldur's Gate.
Add a photo to this gallery

Retrieved from "https://forgottenrealms.fandom.com/wiki/Nashkel?oldid=675154"
Community content is available under CC-BY-SA unless otherwise noted.