30 ft (9.1 m)
Nautiloids were bizarre flying ships employed by mind flayers to travel directly between worlds and through the Astral Plane.[2]

Typical nautiloids looked like enormous conch shells fitted with an exterior deck and rubbery tentacles protruding from the forward section. They were extremely silent and almost impossible to detect in the dark.[2]

The coiled shell in the aft section of a nautiloid served to protect the mind flayer crew from the Sun, as well as to provide a comfortable closed space.[1] The shells were harvested from enormous snails indigenous to an unknown world.[5] The tentacles were used to examine the surfaces of planets in search of specimens or prey.[2]

Nautiloids typically had a crew of between 10 and 15 mind flayers, plus a compliment of slaves (typically humanoids) to operate risky positions on deck. The maximum compliment a nautiloid could hold without compromising its air supply was 35 individuals.[1]

The majority of nautiloids were powered by series helms, but some were also equipped with pool helms. The latter configuration of vessel was more dangerous to encounter, as it freed from two to five crewmembers from having to helm the vessel and allowed them to participate in combat.[1]

Nautiloid series helms were acquired by mind flayers through trade with the Arcane. It was assumed that the Arcane merchants also helped the illithids develop the technology, for unknown purposes.[6]

In the mid-14th century DR, nautiloids were employed in a variety of functions, such as pirate ships, trade vessels, and in spy missions.[1] It was also common for the mind flayers inhabiting Glyth to place a seemingly abandoned nautiloid on a spaceport as bait to attract enemies and runaway slaves.[7]

By the late 15th century DR, nautiloids had become extremely rare. A few mind flayer colonies still had access to a nautiloid, but kept their existence hidden and only used their ships for evacuation of the elder brain in case of an emergency or rarely during an offensive maneuver, owing to their constant fear of being detected by gith hunting parties. At this time, the illithids had lost the secrets of constructing new nautiloids and did not dare risk losing the few they had left.[2]

In the winter of 1489 DR,[8] the research nautiloid Id Ascendant crashed in southern Icewind Dale near the Spine of the World.[9]

There were reports of aggressive mind flayer colonies that used larger nautiloids, known as dreadnoughts, as their mobile lairs.[2][10]

“
Ships that sail between the stars? Next ye will spin tales of a talking hippopotamus that walks on two legs and carries a bow. I asked ye to research facts about other worlds, not spend a week in an opium den.
”
— Elminster's note to Volo in Volo's Guide to Monsters[2]

Port view of a nautiloid.

A damaged nautiloid from the cover of Dungeon 28.

The cover of the novel The Broken Sphere.

A nautiloid flying near a ringed planet. 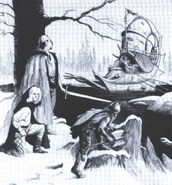 A nautiloid that landed in a lake.

A nautiloid flying over Yartar.

A nautiloid ramming into a hammership.

A fleet of nautiloids flying ofer a Far Realm incursion into the Prime Material plane.