Forgotten Realms Wiki
Register
Don't have an account?
Sign In
Advertisement
in: Locations, Articles in need of citations, Islands,
and 3 more
English

Anything natives can steal, loot or salvage

Slaves, stolen and salvaged goods of all types

The Nelanther Isles, also just called the Nelanther, were a widely scattered chain of nearly one thousand islands west of Amn and Tethyr in the Trackless Sea. More than half the islands lacked potable water and were an unfit place to live. The hundreds of islands that could support life were fought over by ruthless pirates who tended to prey upon the shipping lines of Amn, Tethyr, Calimshan, the Sword Coast and the Moonshae Isles.[4]

Among the hundreds of islands, only the largest of the islands were named. Only a handful of these names were known to mainlanders, while the pirate captains knew them like the back of their hands. The bulk of the Nelanther pirates were never captured due to the multitude of hiding places among the islands. Mainlander maps showed many of the main islands and many of the minor islands, but not the shoals, currents, small exposed or submerged islets, and other hazards among the inner Nelanther.[citation needed] Most of the islands were surrounded by perilous reefs.[1]

The known islands among the pirate captains were:[citation needed]

The channel between the Nelanther Isles and the Tethyr Peninsula was known as Asavir's Channel (presumably named after the pirate Asavir[5]). It was a well-traveled sea lane but treacherous because of the many pirates.[1]

By 1369 DR, the Twisted Rune placed a magical gate on the islands to allow for instantaneous movement to other locations.[6]

Aside from their shared acts of violence and larceny, the Nelanthers had surprisingly little in common with the Pirate Isles of the Dragon Coast. The Nelanthers' pirates were nonhumans such as orcs, lizardfolk, ogres and minotaurs. These various races and factions waged war on each other as often as they did with outsiders.[4]

The reavers of the Nelanther Isles were entirely honorless pirates that tortured their victims, leaving them to horrible deaths. The Nelanther youth were born into the society's violence and their only escape was death, typically while still young. Nearly all fit adults fought aboard ships, while weak and crippled children who somehow survived were left ashore to repair ships or salvage wrecks.[4]

Except for a couple of smaller settlements, the pirates of the Nelanther Isles lived in their ships or in huts that could be abandoned at a moment's notice.[citation needed]

The Sea Towers
Magically warded hard stone towers that were located on some of the islands and in the sea of the region.[4] 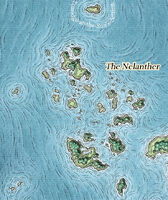 Map of the Nelanther Isles.