Spelljammer: AD&D Adventures in Space
The neogi were a race of spider-like creatures.[4] They were ruthless, xenophobic slavers and plunderers, hated in all known crystal spheres.[5]
“
The enemy of my enemy is my enemy.
”
— Neogi proverb[8]

Neogi were small eight-legged creatures, the adults no bigger than a small child. They had a head with reflective eyes that sat upon a long eel-like neck.[9] With their hairy flattened abdomen, they were sometimes described as akin to a cross between a wolf spider and an eel.[5] Despite the similarities, neogi were warm-blooded creatures.[7]

Neogi frequently dyed their fur and tattooed their bodies, either as decoration or as symbols of family and rank.[7][10]

Neogi personality was utterly alien. Their innate ability to control other individuals led them to believe that mind control was entirely normal and appropriate. They did not comprehend the basic aspects of social relationships of other humanoids and operated on the assumption that individuals were always the property of others. For example, neogi crewmembers considered themselves the property of their captain, but could own their own slaves.[1][5]

Despite their reputation as a trader race, the neogi only engaged in trade if they could not get away with taking what they wanted.[7]

Because trading was just another facet of the neogi predatory practices, they were extremely clever and devious when conducting their affairs.[7] When not working for their masters, they were free to pursue any profitable activities they saw fit. Even when doing business, neogi were extremely dangerous due to the possibility that they could enslave their patrons. For that reason, everyone except the most desperate individuals avoided trading with neogi. However, the neogi's ability to travel to extremely hostile environments and to conduct business with races that would be aggressive and inimical to any other creature did allow them access to a variety of rare and precious commodities, so they were still sought after by greedy humanoids in search for profit.[7] They were also known for setting up shops near mind flayer and drow settlements.[1]

They were intensely cautious, choosing not to fight unless there was a significant prize of gold or other valuables.[9]

Neogi were aware that they were not extremely powerful in physical combat. For that reason, they often sent their slaves to weaken their opponents before they themselves moved in.[3] They produced a natural poison that could be delivered through their weapons or through their bite. They were also capable of mentally enslaving other creatures, rendering them docile and susceptible to commands for up to 24 hours, as long as the neogi remained within one mile (1.6 km) of its victim.[3][1]

They were reported to sometimes fight using a psychic ability to cause pain and discomfort, but it seemed to be limited to their line of sight.[9]

Some neogi ships were capable of crossing to different planes.[1] Plane-traveling neogi were sometimes referred to by other members of the race as "tso" and typically preyed on githyanki and djinn vessels.[14]

The neogi spelljamming enterprise was a rare exception in the sense they did not acquire their spelljamming helms from the Arcane. Instead, they either built their own helms (or acquired them from different sources) or powered their ships by different means, which were largely unknown.[15] For example, some neogi had access to starry compasses, magical devices similar to crowns of the stars that, when properly installed, could allow a normal seafaring craft from Toril to lift out of the water and rise into the Sea of Night.[16][9]

Neogi were usually accompanied by umber hulks, which they employed as slaves to do their physical labor, such as construction of their ships, and combat.[4] Usually every neogi had at least one umber hulk slave. Enslaved creatures of other species were held in a much lower standing than the umber hulks and were treated as little more than food.[5] It was also common to see neogi accompanied by gray renders.[17]

The complicated language of the neogi was called K'azz'jak'n.[6] It was full of sibilants.[10]

Neogi did not have a biological sex or gender.[10] They had a unique asexual reproductive cycle. When an individual reached the end of its lifespan and began showing signs of mental decay, other adult neogi injected a type of poisonous secretion that transformed the old individual into a swollen 20 feet (six meter) tall creature known as a great old master (yrthni ma'adi in the neogi language[18]) that lost all previous intelligence and autonomy and existed only to eat. The other neogi hunted exclusively to feed the great old master and to lay eggs on it. After a two-month period, the eggs hatched and between 20 and 40 newborn neogi fed on the great old master and on each other until the strongest few survived.[5][3][1]

Neogi that were capable of using magic did so through pacts with elder evils such as Acamar, Caiphon, Gibbeth, and Hadar. The neogi encountered those creatures during their space voyages and accepted them as mentors by forging warlock pacts.[1]

Spellcasters among the neogi had developed new and modified spells that were more suitable for their needs. Some had the objective of slowing and terrifying their opponents, such as venom bite and arachnophobia, while the identify race spell was employed to locate strong potential slaves when visiting a new world. In a combat situation, the lethal hatchling spell injected a victim with a neogi egg that could hatch and devour its host from the inside out.[19]

Some neogi also developed special magic items, such as the protective charm of distraction, or the more utilitarian bands of the serpent and bands of the arachnid, which the wearer to transform into their namesakes, among other properties.[19]

The neogi had an unusual view of their deities: they did not offer prayers and rarely sacrifices, but demanded favors and boons from them regularly, seeing the deities as servants of the neogi race. The neogi powers were sexless just like the neogi themselves.[6]

Speaking the name of one of their deities incorrectly was seen as a sacrilege worthy of a slow and painful death by the neogi. Given the difficulties of the neogi language for other races, it was advisable to refrain from the attempt of pronouncing the deities' names.[6]

The neogi were said to come from a distant world that their legends called Ka'jk'z.[6] In a very distant past, they abandoned their original home world and conquered an entire other planet inhabited by umber hulks, which they assimilated as slaves to construct their spelljamming fleet and spread across the Prime Material plane.[1] They have wandered through space for so long that some sages speculated that their homeworld did not exist anymore.[7]

It was also speculated by some sages that the neogi were responsible for the creation of gray renders.[17]

In the mid-14th century DR, the neogi held a base on Journey's Legg, an asteroid in the Tears of Selûne. Most neogi attacks within Realmspace started from that location.[20] Neogi were very rare in Krynnspace,[21] as the result of a confrontation with the Speljammer sometime before the 13th century DR that almost wiped out the neogi fleet.[22]

By the late 15th century DR, neogi spelljammers were still in use, being constructed and maintained by some neogi groups.[1]

A flag with a black field and a red neogi skull as the device was the universal symbol used by wildspace pirates.[24] 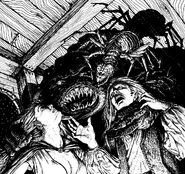