Forgotten Realms Wiki
Register
Don't have an account?
Sign In
Advertisement
in: Locations, Districts of Neverwinter, Locations in Neverwinter,
and 4 more

< Neverwinter
Edit
This article or section is about elements from the Video games are considered canon unless they contradict content in some other Forgotten Realms publication.

The River District was one of the districts of Neverwinter in the late 15th century DR.[1] Its eastern end was also known as the Tower District, after its three notable landmarks: the Cloak Tower, the Fallen Tower that had once stood there, and the hovering Shard of Night.[1][3]

The River District was the northeastern district of Neverwinter, and was named after the Neverwinter River, which marked its southern edge. To the west was the Blacklake District.[1][4]

The eruption of Mount Hotenow in the Year of Knowledge Unearthed, 1451 DR destroyed most of the River District.[3]

Fortunately, the Neverwinter River formed a natural barrier that protected the River District from being overrun by the plaguechanged creatures that appeared from the Chasm in the city's south.[1]

In the late 1470s DR, a vanguard force of orcs from the Many-Arrows kingdom under commander Vansi arrived at Neverwinter. They penetrated the city walls and established a base camp in the shadow of the abandoned Cloak Tower. Then they occupied the tower itself, making it their headquarters. From there, they claimed territory in the Tower District, where the city was still ruined.[1][5] They even reopened the old Fallen Tower tavern. Enjoying the most well-defended stronghold in the district, the orcs could not be defeated or evicted and their presence prevented New Neverwinter's Mintarn mercenaries from pacifying the district. For a time in the Year of the Ageless One, 1479 DR, Vansi and Lord Dagult Neverember held negotiations in the neutral ground of the Fallen Tower tavern and established a truce, until Neverember could work out how to evict them. The Fallen Tower marked the limit of New Neverwinter's reach into the River District on the occasion they made a patrol.[1]

Later that year, Vansi's orcs were finally in open war with Neverwinter across their part of the River District. They heavily fortified the area around the Cloak Tower, expanded their camp, took over an old private guard barracks, and turned the old Merchant Guild Hall into a fort. They attacked and killed all who trespassed upon their territory and looted whatever wealth they could find within and destroyed artworks and Neverwintan banners. The Neverwinter Guard fought to keep them contained with their own barricades, and supplemented their dwindling ranks with many adventurers. Captain Janros, Sergeant Creed, Scout Gaelen, and their adventurers waged a war to weaken and defeat Vansi's orc army. Finally, a party of adventurers infiltrated the Cloak Tower itself, relentlessly fought their way through the orc army and the tower, and slew Vansi Bloodscar herself.[3]

Around that time, Kynorath Greybeard led treasure hunts to recover lost Waukeenar relics from the ruins of the orc-occupied Tower District.[3]

Afterward, the River District was liberated and finally under Neverwintan control. The survivors of the orcish force departed, heading east to rejoin Many-Arrows. By 1489 DR, new citizens and old were reclaiming and restoring the old merchant villas along the river.[6]

Before the devastation of the city in the mid–15th century DR, the River District was inhabited by much of the merchant class of Neverwinter, together with their families and servants.[1] It was also home to a few nobles, merchants' guilds, and wizards.[3]

Afterward, the district was left largely abandoned, though some folk sneaked in for dares, adventures, or secret meetings, to take advantage of the privacy.[1] Many members of the Sons of Alagondar hailed from the old River District, so they knew the area much better than New Neverwinter's Mintarn mercenaries. They also returned to establish hideouts and safehouses.[7] Other River District refugees, meanwhile, had resettled in the House of Knowledge.[8]

Circa 1479 DR, an army of orcs and ogres from Many-Arrows seized the easternmost area known as the Tower District. They killed anyone who trespassed on their territory or interfered with their activities.[1][3]

Sometimes, beasts from the wilds got into the River District and hunted on its streets. They made it hazardous for refugees to return.[1] People also sighted plaguechanged monsters in the River District's north around 1479 DR.[9] In fact, the orcs kept a lid on the number of monsters in the district, including the plaguechanged, which were emerging from the sewers.[1]

Originally occupied by the merchant class, many of the houses built in this district were large and sturdy, but not especially ostentatious compared with those in the Blacklake District. Such houses could fit a family of up to eight people, together with their servants.[1]

There were also many guardhouses and security walls, though in the urban conflicts of 1479 DR, these provided cover for skirmishers and ambushers. At that time, a hastily built barricade was put up to separate much of the River and Blacklake Districts; however, the Mintarn mercenaries left it largely unguarded, instead just posting warning notices.[1]

Once, long flower gardens ran down the middle of every street, but by the late 1400s these had died off or been taken over by weeds.[1]

One notable area was Merchant Square, once a marketplace that received traders from up and down the Sword Coast, whether to buy, sell, or barter. It was the financial hub of Neverwinter, and was close to rivaling Waterdeep in terms of money exchanged each day. It lay near the Merchant Guild Hall. However, it was destroyed in the eruption and anything remaining of value pillaged by thieves, bandits, or orcs. Little more than a grassed-over battlefield remained in 1479 DR.[3]

On the other side of the Merchant Guild Hall was the neighborhood of Pedlars Path. Cobblers, tinkers, and other low-end merchants and craftsman lived, worked, and sold their wares around its narrow streets. The orcs later rebuilt these small houses into defensive structures.[3]

In contrast, Waukeen Way was where prosperous merchants built their stately manors and fine gardens. Most of these were destroyed in the eruption. Despite this, a single shrine to the Merchant's Friend remained standing within the ruins. As the name suggested, many of the merchants were worshipers of Waukeen and they kept private shrines boasting golden cornucopias believed to bless them with wealth; most of these cornucopias were lost in the destruction and occupation, but were recovered by Kynorath Greybeard.[3]

The Cloak Tower stood near where the Neverwinter River entered the city,[10][11] on its easternmost side, close to the city wall. In the 1400s DR, it was contained within a trapezoidal area filled with open parkland and trees and ringed by a fortified wall.[4] The Many-Arrows occupation of the area saw this space filled with orc camps and barracks, as well as barricades and watchtowers.[3] 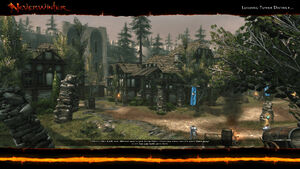