Noanar's Hold was a village, just off the Evermoor Way just on the edge of the High Forest, that grew up around one of the most famous hunting lodges in the North. Cottages and well-kept stables rambled between the trees.[1] One way to reach the village was taking Jundar's Pass south from Calling Horns to Dead Horse Ford, then taking the path east along the banks of the River Dessarin.[2][3]

The Hunt Lords ruled the settlement and arranged hunting parties for rich sportsmen of the Sword Coast.[1]

Eventually, less and less people came, as rumors got out that the Hunt Lords encouraged their guests to kill one another. In their old age, the Hunt lords struck a deal with Orcus, who transformed them into wights, and their long-dead steeds into warhorse skeletons.[4]

Noanar's Hold was named after a famous hunter who once lived in the village keep.[5]

The village's hunts could involve anything from pursuing normal creatures to sentient beasts and humanoids that were less than willing participants.[1]

The White Hart Inn was the best inn in town and was run by Ghille Cever,[1] and later Avgar Filroy.[4]

Noanar was also the name of a Netherese arcanist famous for his fire magic.[6] 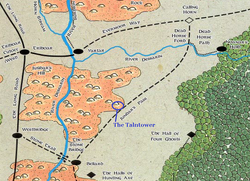 Map showing a route to Noanar's Hold. Click to enlarge.
Add a photo to this gallery

Retrieved from "https://forgottenrealms.fandom.com/wiki/Noanar%27s_Hold?oldid=598968"
Community content is available under CC-BY-SA unless otherwise noted.