Understood Infernal but could not speak[1]

Ordered among the diabolical hierarchy as least baatezu,[4][7][8][9][10][11] nupperibos languished at the absolute bottom of the baatezu hierarchy[12]—if one ignored lemures—blindly following the orders of more powerful devils in pathetic attempts to lessen their torment.[13][14]

“
A lemure emerges from the Styx wiped of memory, yet the patterns of evil it performed in life remain indelibly inscribed upon its soul. Those who lacked ambition cannot climb the hierarchal ladder of the Hells. They instead step down, becoming nupperibos.
”
— Mordenkainen[1]

Nupperibos were bloated, 5 ft (1.5 m) tall devils that waddled about with their 250 lb (110 kg) pound bodies.[2] They were similar to lemures, being vaguely humanoid monstrosities with even less discernible features. They had lanky, arm-like appendages and a head with the eyes and mouth sewn shut, a fact that didn't prevent them from shrieking or sensing those around them.[1][14][13] Vestiges of their old forms always lingered, such as tattoos, scars, odd skin coloration, or other obscure leftovers.[2] Clouds of vermin formed a stinging veil around their distended forms.[1]

Nupperibos barely had anything that could be considered a personality. They lacked any kind of ingenuity to develop anything that resembled combat strategy on their own, even when somebody directed them. They showed their sense of order in their unquestioning obedience towards their superiors and expressed their cruelty through the glee they took when engaging enemies.[2][1] They followed the telepathic orders of any devil because of their sensitivity to such commands and in order to lighten their own torment at the hands of their commanders.[14] They knew little more than unending hunger, consuming everything they could scoop into their sewn-up mouths.[1]

Like lemures, they were incredibly hard to kill, as they had a persistent if slow, regeneration ability. Even when burnt down to ash, a nupperibo's regeneration ability fully restored it if given enough time. There were two main methods to permanently destroy them. Firstly, they only regenerated when within the lower planes, meaning if a nupperibo was brought away from there, it could be permanently killed. Second, nupperibos could not regenerate from wounds dealt by holy implements like holy weapons or holy water. Another trait they shared with lemures was their mindlessness, which made it impossible to mentally manipulate them.[3]

The horrific appearance of the nupperibos combined with their ruined mental state created an aura of raw terror around them.[2] When more than ten nupperibos ganged up on the same opponent, they generated an effect that was similar to cause fear against their target. Their fetid forms were also constantly being swarmed by vermin that stung at non-devils nearby. Provided they were in the Nine Hells, nupperibos could unerringly pursue any creature that was hurt by one of the vermin.[1]

Outside of their instinctual desire to inflict pain and unending quest to end their hunger, nupperibos had little independent thought. They violently lashed out at any non-devil they encountered and relentlessly hunted potential prey unless distracted by another meal. While pathetic when alone, they were normally gathered together, to clog important passageways or attack in mob formations.[1][2]

With practically no personal goals or self-preservation instinct, they mindlessly obeyed the telepathic commands of other devils, making them ideal Blood War troops. Groups between four and eight were often dispatched, but on Blood War battlefields their numbers could reach the thousands.[1][2] Their osyluth supervisors gathered them into mobs and equipped them for war with crude weapons, as they wouldn't be particularly more efficient with refined tools, and sent them to the front lines to engage demonic hordes. Most nupperibo mobs were under the command of, and sometimes gathered by, spinagons, yet even when directed they fought with no sense of strategy, finesse, or forward thought.[2][15] In order to use their ability to cause fear, their superiors had to specifically instruct them to focus on one opponent.[14] Unless told otherwise, they merely waded directly into combat blindly flailing at their foes with whatever they were given or tried to rip their foes apart by biting and clawing at them.[2]

A nupperibo's role in the infernal military was to serve as cannon fodder,[13] acting as distractions, rearguard during a retreat, cushions to absorb attacks, or forces to occupy the enemy. A nupperibo was never a key part of a military campaign, instead only used to make enemy spellcasters waste valuable spells and time that could have been used against more important units.[2] If not given further commands, nupperibo hordes would proceed to blindly stumble throughout the Nine Hells attacking any non-devils they came across.[4]

“
Fat, disgusting, weak, mindless— I don't know, that certainly sounds like a punishment to me.
”
— Gorad Drummerhaven[9]

Nupperibos were at the utter bottom of the baatezu hierarchy, only standing higher than lemures in some regards by pure technicality.[16][13] The status of nupperibo was a dead-end in terms of promotion, forcing a nupperibo to first be demoted into a lemure before they could further progress.[17]

Nupperibos were the target of abuse at the hands of other devils who outranked them.[3] They were the menial labor force and partial food source of Baator, a virtually inexhaustible resource that constantly gained new members due to frequent devilish political struggles.[2][14] Hundreds of thousands of nupperibos swarmed Avernus and Dis, although like vermin they could be found anywhere within the Nine Hells. Most handlers lost them in the thick of battle. If they did return, any useful items they'd scavenged were taken away.[2] If not being used for slave labor, they could be found guarding the possessions of their handler. When a nupperibo was found alone, it was most likely a survivor of a former mob, or an enforcer or guard gifted to a promising, low-class, mortal servant of a devil. Most devils found the idea of a diminished devil forced to serve under a feeble mortal to be a humorous joke.[2] Another common use for nupperibos was as trading stock for baatezu deals with the yugoloths in exchange for their mercenary services. Whether in the hands of the baatezu or yugoloths, nupperibos were disregarded, mistreated, or consumed by the beings of the Lower Planes.[14]

A devil was demoted into a nupperibo only after significantly failing their superior, as a common belief among the devils was that demotion was the best way to demonstrate the depths of one's failures. Sometimes when a failed devil was turned into a nupperibo, they were kept around because their superior still saw some value in the capacities of their original form, returning them to their former station when it was opportune. From time to time, this led a devil to kidnap a nupperibo from its rival in order to restore the nupperibo to its previous status to gain information and/or a new ally. Asmodeus himself was rumored to use the intrigue spawned from such a tactic for entertainment, spreading rumors that a nupperibo he granted to one of his mortal followers was a former member of his court.[2]

If a higher-ranking devil somehow became a nupperibo accidentally, they often left their subordinates with instructions on how to find them with detailed descriptions on how to restore them to their former positions. Such an arrangement was flawed in several ways, as distinguishing one nupperibo from a horde was difficult even for devils, and from time to time it happened that a devil intentionally disobeyed the order. Some devils found themselves working for many centuries before reclaiming their old position and if they did they would have to undergo the same horrific treatments to get their past forms back again. However, most devils viewed the chance to work their way out of the lower castes as a more preferable fate than the inherent uncertainty of death.[18]

It was said nupperibos didn't eat despite their voracious appetites.[19] In truth, they were always trying to end their unquenchable thirst for food and drink by consuming whatever filthy matter they found, but could never satisfy their gluttony.[1] Nupperibos were blind, deaf, and mute, only able to discern the existence of nearby creatures by scent.[2] It was partially because of this lack of sensory information that nupperibos were as unintelligent as they were.[4] One way to "blind" a nupperibo was to confront it with an overpowering odor.[2]

Devils were demoted into nupperibos through a process often performed by an excruciarch that left the devil with practically no hint of its former form. Some of their flesh was carved off, their eyes and mouths were sewn shut, their ears were sealed with lead, their bodies were thoroughly filled with corruption, and finally, their brains were removed through their nostrils.[2] Unique scars allowed others to identify them as their former selves, so most higher-ranking devils tried to make themselves recognizable.[2][18] If a devil died outside of Baator without making a deliberate attempt to leave, rebirth as a nupperibo was the most common fate and forced them to crawl back up the ranks to reclaim their lost status without help from a former servant. If a nupperibo died outside of Baator it stayed slain permanently,[18] while those that died in Baator normally returned as nupperibos, although there was a one out of a hundred chance they would become a lemure.[14]

Another way to generate a nupperibo was to leave a soul larva alone on Baator as they naturally grew into nupperibos. However, most nupperibos were eventually turned into lemures so they could become full members of infernal society.[9] Sometimes the souls of the wicked who found themselves within Baator were not truly wicked enough to become lemures. Rather than acting with true malevolence, such beings committed evil through inaction, doing evil out of laziness or indifference. Such souls still entered the Nine Hells through the River Styx, but quickly became nupperibos due to their innate lack of ambition.[1][14] Nupperibos themselves were genderless and could not reproduce.[19]

After spending nearly uncountable centuries in their abysmal state, nupperibos would start undergoing several changes that marked their transition into a new disturbing form. Unlike baatezu, which had to be promoted through torturous processes to achieve new forms, these shifts simply occurred naturally after an extended period of time.[20]

At first, the changes would be subtle, but nonetheless jarring; maturing nupperibos were not only able to see, but they were actually sapient, capable of speaking in an unknown language and understanding their situation, although granted they were not particularly smart. After a certain point, the changes would become so noticeable that it would be difficult to classify them as still being a nupperibos. Their pale stomachs would suddenly burst and dozens of small, pink tendrils would erupt out from the carnage, violently grasping at everything nearby. Twice as fast and far more durable than a regular nupperibo, these creatures would not only be immune to a typical devil weakness, electricity, but they would temporarily drain the life energy of anything they touched.[20] 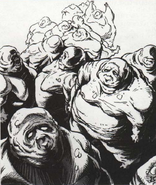 A milling mob of nupperibos as drawn in the Monstrous Compendium: Outer Planes Appendix.